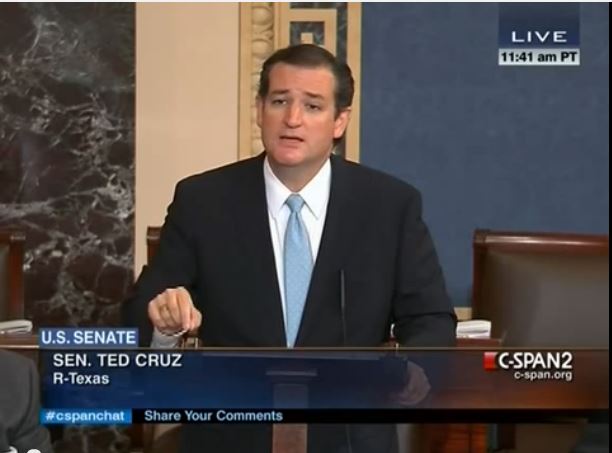 It’s so gratifying to see how he handles the lapdogs. It’s like taking candy from a baby.

A really encouraging interview to end this most dismal year.

Cruz has what other Republicans and many conservatives do not have: conviction and a strong belief system. He doesn’t grope for what he will say next, does not use passive words to seek an interviewer’s approval, or dance all around an issue to avoid speaking the truth. We need an army of Cruz’s to set this country right again.

He doesn’t have to say that he’s “severely conservative.”

Ted Cruz is a manly man, not a castrati.

BUT – we need him in the Senate, not the White House. Too many conservatives have bought into the statist fallacy that the President leads the country, when in fact he just leads one-third of the federal government, and only a co-equal third at that.

The People’s voice is in the Legislature, and that’s where we need, not just Cruz, but a whole lot of pro-liberty types.

The #1 selling ‘Coloring Book’ on Amazon ! It don’t get any better “)
Was intrigued by the Senator from the beginning.Now i can’t find a better smarted more articulate Senator than the Freshman from Texas.
When he ran his filibuster . I stayed up with him (old vet loved it)and knotted off a few times.Woke with 1 eye open and the man was still speaking coherently and on topic ! I was really impressed then . True American Good American . Though his wife works for Goldman Sacks i can’t find anything advantageous .She’s smart and has a good job is all..
ps: bet Rubio wakes up screaming every night ! what could of been .

I went over to amazon to check it out–it was out of stock this morning, but available from the publisher…lo and behold, it’s available again.

Since we’re on the “Honey Badger” radar mode, why not show the original “Crazy Nastya** Honey Badger”?

Mind you, a bit foul-mouthed, but worth the watch.

(I prefer Rikki-Tikki-Tavi myself, but…)

When rebutting “you shut it down”, they should always lead with “Harry Reid had the money on his desk, he stated clearly ‘I will not do this piecemeal’ … and he pocket vetoed government funding all by himself, with Obama’s approval.”

Then explain funding comes from the House … it is their duty not to spend wastefully. Budgets MUST be looked at piecemeal … remember Obama was going to go through the budget with a fine toothed comb. But now they demand omnibus bloated with pork bills, along with THEIR trillion dollar deficits. And you in the media loudly damn the House Republicans for doing their fiscal job, while Democrats openly state they will not debate one iota, but will gleefully explode the debt.

Where are the RINOs to piss all over Cruz? Remember, he made a huge mistake (according to them), because the media blamed the GOP for the shut down.

Discerning conservatives understand that the establishment GOP completely failed to explain exactly who and what shut down the government, and it wasn’t Ted Cruz.

Re: Needing Cruz more in the Senate than in the White House – these are not mutually exclusive. There are plenty of genuinely conservative candidates out there and a Cruz presidency would mean that conservatism had won the so-called civil war within the GOP and that the current GOP establishment would no longer exist, no longer waging war against its own damn base. A Cruz in the White House offering support to conservative candidates all across the country would be a wonderful thing.

I’d be just as happy to see Cruz in the VP slot, if the top slot person made him a working VP if they won. A center-right top slotter could pave the way for two terms of Cruz come 2020 or 2024.

The GOP is corrupting of supposed conservatives: Christie, Ryan, Rubio, et al. These three former ‘conservative rock stars’ now seem to me to be weak candidates in the mode of Dole, McCain, and Romney.

We need Cruz for more than 8 years. Leave him where he is, gaining in power and strength, being able to influence incoming lawmakers, being a strong Conservative voice righting the ship of state. In saying this, I finally get why Sarah Palin didn’t run. Yes, I’m slow.

I’ll take the devil’s advocate position here. I greatly admire Ted Cruz. He is a unique politician and asset to conservatism. But as I watched his interview with the ABC reporter I was struck by how he continues to play the same game as we all do with these people. Or rather, dance the same dance. All smiles and a great show of mischievous play but mincing around the core issue of the reporter’s gross contempt for conservatism and for the interviewee. We need to change this paradigm. They hate us and wish to destroy us. But we’re conditioned to a mode of deference to those who hate us and wish to destroy us. This gets us nowhere beyond holding our own. This is unacceptable in a war.

Compare this with Breitbart’s conversation with Terry Moran in which he directly confronts the reporter’s bad faith guile and exploitation of his role as interlocutor.

Cruz, as a leader, has to pave the way for a new colloquy with the media in which we do not accept or defer to their role as good-faith interlocutors. I realize Cruz wishes to remain collegial and not appear “mean” — but this is just another concession to their power to control conversations and narratives. I actually believe there is a way to confront these people in both a charming and incisively damaging way.

Cruz is a national debate champion and I suspect he knows exactly what he’s doing rhetorically, with a plan to up the ante in the direction to which you point. If he isn’t doing so already, I’d like to see him consult with Newt Gingrich on how to deal with gotcha media in real time.

It’s a long time until the next election…fine with me if he holds his cards close. He’s certainly as able as Newt to go toe-to-toe.

Jonathan Karl is a joke. First of all, there was no “government shutdown”. Harry Reid’s failure to pass the continuing resolution left 83% of the government open and fully operational. It’s like saying that a restaurant is “shutdown” because only 21 out of its 25 tables have customers eating at them.

Second, just about the only people affected by it were the WWII veterans. Obama erected his phony Barrycades to punish them, probably because as a bloc they tend to vote Republican. And of course every time someone jammed a microphone in John McRINO’s face he talked about how awful it was for a handful of Grand Canyon employees – which was just a way for the vengeful McRINO to blame Cruz.

Of course, all he actually accomplished was 1) giving Obama a welcome break from the first month of negative press coverage in his life from the events in the Middle East, 2) diverting attention from the first few days of the ObamaCare rollout, running Republican numbers down in the polls, 3) building a 1.5 million name database of people dumb enough to think an internet petition does something, for his future fundraising, and 4) ensuring Terry McAuliffe won the Governorship of Virginia by taking away the spotlight from Cuccinelli’s only hope, the failure of ObamaCare.

If you are dumb enough that you cheer and shout whenever someone throws you a piece of meat, even if it is rancid, there will always be some grandstanding demagogue to throw it.

I will ask you the same question I asked another commenter recently: Please provide me a scenario where the media would ever give the GOP favorable press other than when one of them bashes their colleagues. Remember how loved McCain was by the press before he ran for President? Remember how the media turned on him after he was nominated? See how they love him again when he bashes his colleagues? Do you see a pattern there? In the shutdown issue: if the GOP had caved immediately, the press would not have praised them, they would have lauded Obama’s strength and incessantly talked about the GOP’s impotence. The.MSM. Is.Democrat. Their job is to help that party destroy the GOP.

Don’t hold your breath. The RINOs have their exculpatory bad guy to point at, and so what if it’s one of their own? Evading responsibility is the goal.

That the media will be anything but antagonistic towards the GOP no matter what they do is something they just don’t get. The GOP has battered spouse syndrome with a touch of Stockholm thrown in as well. None so blind….

If you can’t see that Cruz, through his filibuster and his insistence on not funding Obamacare, brought Obama the worst press in his life, then you’ve been watching network tv, CNN, MSNBC.

But he rocked the boat, displayed allegiance to the principles he ran on, and represented the wishes of the people of his home state instead of those of his party’s ruling elite. This cannot be tolerated by the GOP establishment.

No matter how bad things get for the regular folks out here the media continues to cover for their ideological brethren. I continue to hear pundits both, left and right, debate the wisdom of the faux shutdown otherwise known as the 2 week paid vacation for federal workers.
How is it when the darlings of the left like teachers and transit workers go on strike and cause real pain and hardship for the citizenry for weeks on end they are viewed as heroes who stand up for the little guys.
It seems that real pain caused by the left is always viewed as necessary whereas if conservatives take a stand the press always pushes the meme that crazy,selfish,racists are trying to destroy this budding socialist paradise.
To their credit the left is hanging tight and pushing this talking point whenever they get a chance. The conservative pols and pundits just sit their and take the abuse. Why must conservative omelets be made without cracking the egg. While lefty omelet makers may smash the egg and the chicken if they feel the need. Who made up that rule and why do the conservatives among us feel the need to blindly and meekly follow it.
Rebut people!!! Rebut!!!!!!!
Tim