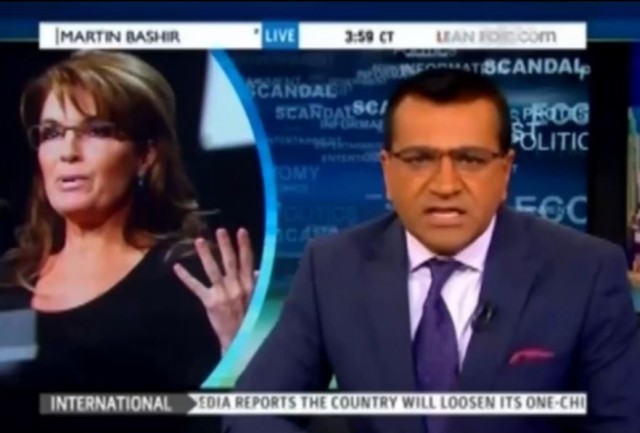 Martin Bashir infamously suggested that someone shit and piss in Sarah Palin’s mouth because she used the (quite common) analogy of national debt to slavery.

Bashir made his suggestion by way of analogy to a slave torture, stating that Palin would be a good candidate for it.

Bashir apologized, then was put on vacation, and today resigned.

Tommy Christopher at Mediaite has the news:

Just over two weeks ago, MSNBC host Martin Bashir delivered a harsh piece of commentary that culminated in the suggestion that someone should “s-h-i-t” in former Alaska Governor Sarah Palin‘s (R-AK) mouth. Bashir offered an abject apology on his next broadcast, but a chorus of critics continued to demand action against the host. After a reported “vacation” for the host earlier this week, Bashir announced, Wednesday afternoon, that MSNBC and Martin Bashir are parting ways.

Here’s the statement from Martin Bashir, via email:

After making an on-air apology, I asked for permission to take some additional time out around the Thanksgiving holiday.

Upon further reflection, and after meeting with the President of MSNBC, I have tendered my resignation. It is my sincere hope that all of my colleagues, at this special network, will be allowed to focus on the issues that matter without the distraction of myself or my ill-judged comments.

I deeply regret what was said, will endeavor to work hard at making constructive contributions in the future and will always have a deep appreciation for our viewers – who are the smartest, most compassionate and discerning of all television audiences. I would also wish to express deepest gratitude to my immediate colleagues, and our contributors, all of whom have given so much of themselves to our broadcast.’

That sound you hear is Martin Bashir falling off the planet. The only way anyone will hear from him again is if he somehow ends up the answer to a new Trivial Pursuit edition.

He is a bad dog! I hope he gets deported, preferably to Pakistan (he left the UK in disgrace).

Nice Scottish Highlander, reminds me of my Grandfather who had a small herd.

The MSNBC Graveyards are full of indispensable homophobes and misogynists.

There’s a waiting plot for the career of a blood-soaked anti-Semite.

I did not see the on-air apology so I don’t know what all was in it but in the email apology, I don’t see a direct apology to Sarah Palin. Was that ever done? If not, this is just another “cover your ass” statement and not an apology.

What about the producer or executive producer who signed off on it?

If he wishes to make a positive contribution to civil society he could urge Lefties …oh, who am I kidding?

That network is “special”, that’s for sure.

They are looking for militant’s, newsreader’s, bomb belt wearer’s and assorted other positions. You’ll fit right in.

Bashir is given the dignity of resigning, sparing him the public humiliation of being fired. His resignation also absolves his employer of the need to take a public stand on his conduct. It would have been a more effective lesson for the many other talking heads who are just as filthy and offensive as Bashir if he had been fired for cause. A formal statement defining acceptable v. unacceptable conduct by MSNBC would have shown that the network has a serious policy about civility that it intends to enforce. I can’t think of even one little reason why they would want to avoid doing that, can you? Just kidding. They would have to fire too many other people if they took a stand on Bashir.

[…] William A. Jacobson notes at Legal Insurrection, Bashir is resigning (read: likely being shown the door) after he […]

Waylon Jennings gives up his seat to J.P. “The Big Bopper” Richardson on flight with Buddy Holly and Ritchie Valens.

MSNBC forces Martin Bashir to take a seat on flight with Alec Baldwin.

Trivia: Waylon Jennings is discovered at Luke’s uncle’s and grandfather’s landmark club, JD’s, where he plays 7 nights a week for years:

Trivia: Presidents Lincoln and Kennedy had several amazing coincidences in common. You have probably heard several yourselves. But, the one that is almost never reported – one week before he died Abraham Lincoln was in Monroe, Maryland.

JackRussellTerrierist in reply to LukeHandCool. | December 5, 2013 at 9:56 pm

I am usually so cynical that is surprises me that I find myself wondering what went on behind the scenes here.
I do not like Bashir but I thought he had really seen the light when I watched his apology. At first I thought MSNBC really fired him and he was allowed to say he resigned to save face but now I wonder. I believe those spokes people over on MSNBC are ordered to behave as they do, most of them seem to relish it but maybe Bashir, wanting no more to do with the MSNBC filthy mind set actually did resign on his own.

That’s a shame. It couldn’t have happened to a more prejudiced man.

How about Pears Morgan?

Then, they could share a flight back to England.

Forgot to add – if so God Bless him.

After such crude gutter remarks directed personally at Governor Palin on a national broadcast network, Bashir is being given exquisitely deferential treatment by MSNBC.

By the standards of the enlightened Left, he is at least due for politically correct measures of attitude adjustment and re-education from his blue-state employers. Six months of daily sensitivity training would not be excessive, plus a personal apology publicly expressed to Governor Palin, plus a public statement of contrition and ‘never again’ from MSNBC.

I’d settle for Bashir being ordered to accompany Palin on an Alaskan hunting trip. Alone.

I would prefer he go quail hunting with Dick Cheney!

_Todd_ Palin, polar bear with a baiting station, and I’ll pitch in for the ticket.

May a thousand death panels plague his health.

Indeed. The squalid likes of Matthews, O’Donnell and so many others will be tearful and blame Sarah.

I understand it all now. This is not about Bashir, it is about Sarah Palin hating free speech, especially from a person of color.

“Compassionate and discerning” is a stretch for many MSNBC viewers.

Those that do fit the bill might look to expand their horizons away from the propaganda and hate too often offered at that network.

Fox may have its agenda, but it does not emulate the extremism of MSNBC, and contains more balance. The ones that ridicule it are unaware that most people can see their “emperor’s clothes.”

He should have been fired immediately.

Nothing qualified Bashir in the first place to be a political commentator.

I read somewhere that the WH ordered him off because Obama is on tomorrow .with some porky looking fellow.

Timing sounds about right . The WH is realising the flack has not died down & Obama might be asked about it . Given that he has little knowledge of slavery they know he could give a corpse man type answer.

Or worse he would have to defend Palin.

Dear Martin: As my Sicilian wife says about your type:”Time wounds all heels.”

May it be vastly so in your case.

Martin Bashir Resigns from MSNBC, Disappointing Dozens of Viewers : The Other McCain | December 4, 2013 at 5:25 pm

Shall we start a pool on how long it takes for Bashir to join the Obama administration?

if martin had any common sense…. he would beg msnbc to not let him go. cuz given the job prospect of the country…
at this rate… he will prolly commit suicide or go on a shooting spree. (like what happened with chris dorner… as he couldn’t seem to find a job after he was fired)

…even less likely to find one, since 0bamacare looms over the entire country and will be wrecking havoc on all businesses …who are gonna be cutting hrs to part time on a permanent basis.

….if republicans want an easy victory in 2016 and the next several elections ….all they need to do is focus on the ‘obamacare issue’ and pound that issue non-stop… as it seems to be working to turn the public against the dems… even the dems are scared to show any support of and I hear harry reid exempt his own staff from it.
….why exempt yourself if it’s a good system of coverage?

show how much damage it is doing and continues to do to the country. and also all how all the illegals are prolly getting to use it for free without having to pay either the coverage costs or the obamacare tax footing the bill to the taxpayer …and use the issue of detroit to show how bad liberal policies are for a nation. …the obamacare issue is VERY damaging to the dems… VERY VERY VERY damaging.

Consequences. Not accountability, consequences.
It’s a start. Not much of one, and for the wrong reason, perhaps, but a start nonetheless.