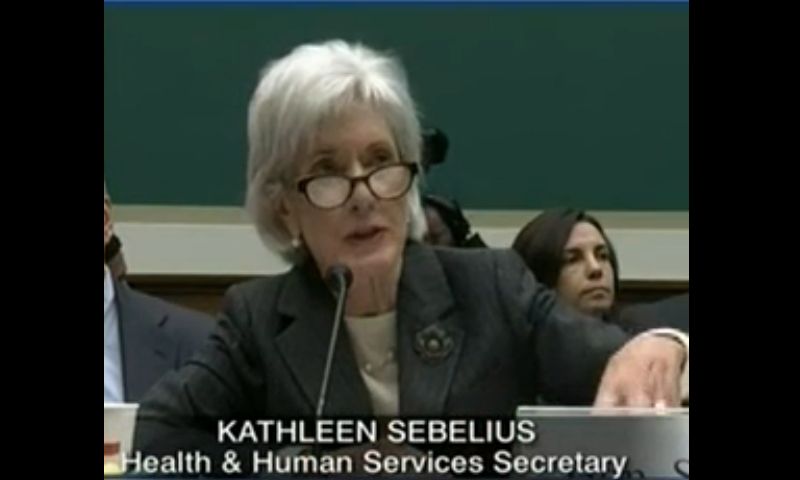 The Department of Health and Human Services released health insurance enrollment statistics Wednesday, and while numbers have increased, they still fall far short of original projections for the end of November.

From the Associated Press, Health care signups pick up but may not close gap:

With time running short, the nation’s health care rolls still aren’t filling up fast enough.New signup numbers Wednesday showed progress for President Barack Obama’s health care law, but not enough to guarantee that Americans who want and need coverage by Jan. 1 will be able to get it. Crunch time is now, as people face a Dec. 23 deadline to sign up if they are to have coverage by New Year’s.

That means more trouble for the White House, too, after months of repairing a dysfunctional enrollment website. Next year could start with a new round of political recriminations over the Affordable Care Act, “Obamacare” to its opponents.

The Health and Human Services Department reported that 364,682 people had signed up for private coverage under the law as of Nov. 30. That is more than three times the October figure, but still less than one-third of the 1.2 million that officials had projected would enroll nationwide by the end of November. The administration’s overall goal was to sign up 7 million people by next March 31, when open enrollment ends.

What remains an issue is how many of those who have signed up for coverage have actually made a payment.

The newest HHS signup numbers didn’t include how many people have actually paid their first month’s premiums, the last crucial step before completing enrollment.

“Our concern is that 364,000 number is fraudulent because it’s not those who have purchased plans yet,” said Rep. John Shimkus (R-Ill.) during the Energy and Commerce Health Subcommittee hearing.

The administration won’t know until early next year how many people completed enrollment, Sebelius said, because Dec. 31 is the deadline to pay for coverage starting January. “Some may have paid, some may have not,” she said, noting that payments are made directly to insurers and not HHS.

Also a sticking point remains the issue of so-called “834 errors,” in which some insurers are still experiencing instances of files that contain data that is incorrect or aren’t receiving files at all.  While those errors have decreased with improvements to the healthcare.gov website, officials indicated last week that about 10 percent still contain errors.

In a blog post on Wednesday, Sebelius announced that she has taken “a series of initial steps in the process of better understanding the structural and managerial policies that led to the flawed launch of HealthCare.gov.”

Among those steps is the HHS Secretary’s request to the agency’s inspector general to review the development of healthcare.gov, which appears to be primarily focused on the work of the contractors on the project, overall project management and on the contractor selection process.

Why are we trusting their numbers?

“Obamacare” to its opponents.

Anyone else cleaning coffee off their monitors?

The other ‘coffee spew’ moment is here: “Nationally, an additional 803,077 people have been determined to be eligible for Medicaid, the safety-net program shaping up as the health overhaul’s early success story.”

Success is adding more people to an unfunded liability?

Only in America would it be considered a success that there are an additional 804,000 people who are so poor that they qualify for Medicaid.
This isn’t the elderly who have spent through their money and are now looking for Medicaid coverage for a nursing home. These are additional citizens who live in such poverty that they qualify for Medicaid, having virtually no assets and little income.
Yip Yip Hooray, isn’t that something to be proud of, Mr. Obama.

Even if the government’s goal is met, it’s only a 1.5 million net gain when you factor in all the policy cancellations as of Jan. 1. But it’s still worse than that, considering that millions of paying customers have effectively been replaced with nnopaying Medicaid recipients. I guess that’s a feature, not a bug.

“Sebelius announced that she has taken “a series of initial steps in the process of better understanding the structural and managerial policies that led to the flawed launch of HealthCare.gov.””

Day late and a dollar short toots. Competent people tend to know these things before they start the project.

Get ready folks. Not only is ObamaCare imploding – it is taking the Entire HealthCare sector with it. It is going to be like the Mortgage Collapse – only with dead people.

Maybe if the Prez offered his recent smiley face selfie, taken at the Nelson Mandela Funeral, with each enrollment the enrollment numbers would explode -one way or the other.

I’ve been meaning to ask. Is the white half of Obama experiencing white privilege? And, isn’t it automatically racist toward the black half?

The administration won’t know until early next year how many people completed enrollment, Sebelius said…

Don’t tell me they paid 600 million for a system that won’t allow them to run such a simple query!
I think they do have the numbers but they don’t look pretty.

That said, the numbers are irrelevant. Participation is mandatory for fear of an audit or worse. It’s just unfortunate that the economy did not improve before they shopped for political capital. Medicare could have worked. It would have been better still to address progressive inflation and other market distortions, which ensure high cost of living that is compensated through redistribution schemes such as Obamacare. It is a myopic vision which is certain to violate civil rights.

Since the payment module hasn’t been completed, no one has paid for insurance. Therefore, no on has insurance. They’ll go to the doctor come January and find out they’re not covered for anything…

It’s going to crash and burn now, hard. There are no fixes or part measures with any chance to save it.

It was ill-considered and poorly structured, more evident of the hubris of the leftist elites than of any competence or compassion.

No payment module? Then how do purchasers know how much to pay and where to send checks?

We should all help test out healthcare.gov. Go and start to signup and take a long long time to make up your mind. It’s a tough form to fill out and so many choices I expect it could take years. There are only 50,000 users allowed in the website at once. It will be hard for anyone to signup if everyone is real careful making their choices.

I probably will signup my children, pets and wife for separate ObamaCare insurance policies all at the same time. Well at least to explore my options. It’s going to take me a very long time to fill out all those forms.