“Our college will not abide by this measure, through which, in our view, the American Studies Association completely discredits itself.” 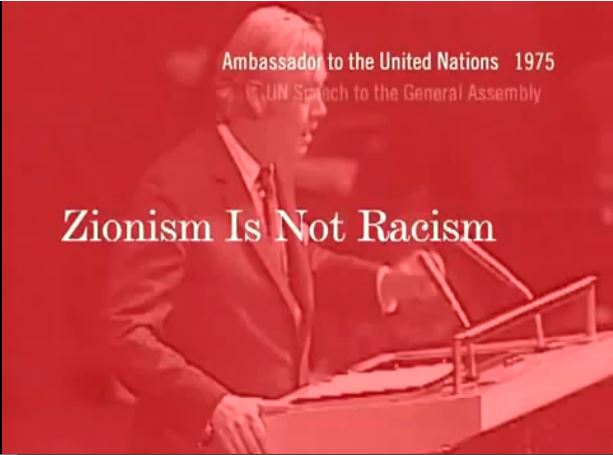 I have been accumulating the list of universities rejecting the anti-Israel academic boycott passed by the American Studies Association and two smaller groups.

Many of the statements issued are eloquent and forceful, but this one from Goucher College in Towson, Maryland stands out for its clarity in pointing out the pernicious absurdity of the boycott.

Goucher is not an Institutional Member of the ASA.

Some of the language is reminiscent of Daniel Patrick Moynihan’s denunciation of the notorious “Zionism is Racism” U.N. Resolution. I have to think the similarity of language was intentional. Here is Moynihan’s famous line:

You be the judge as to whether Goucher was channeling Moyhihan.  The Goucher statement was circulated in an all campus email that was forwarded to me (emphasis added):

Dear Members of the Goucher Community:

We are writing to express our strong concern about, and outright disapproval of, the recent vote by the American Studies Association to boycott Israeli academic institutions, apparently as a result of some of its members’ disapproval of certain policies of the Israeli government.

Goucher College, as we try to make clear by our words and actions daily, stands for open discussion, research, and inquiry about all issues, international or domestic, in every intellectual and political domain. The free exchange of ideas and opinions is essential to liberal arts education and to our very existence as an academic community.

We would, of course, be outraged if any such boycott were launched against all American colleges and universities by any association of alleged scholars anywhere in the world, out of disagreement with a US military engagement or other element of American foreign or domestic policy.

Hence, without taking any particular position on Middle East issues, we must invoke a strong and unequivocal stand against this outrageous and peculiarly selective move by the ASA, which seems far outside the scope of “American Studies.”

Our college will not abide by this measure, through which, in our view, the American Studies Association completely discredits itself.

On the contrary, in the great tradition of academic freedom, we will proudly continue to associate with all colleges and universities in Israel and everywhere else around the world where discussion is robust and open, and where Goucher students are welcomed for their study abroad.

Update: It’s worth noting that President Ungar also was a signatory to the 2007 Boycott Israeli Universities? Boycott Ours Too! advertisement run in The NY Times in response to a threatened Israel academic boycott by Britain’s University and College Union.

It’s good to ave such an unambiguous voice on this matter.

Professor, after all these years dwelling under the incompetency of President Obama, it is so refreshing to see an American take a proper moral stand against the Muslim thugs of this world.

Also Professor, I applaud you for the good work you do with your blog. Your words carry weight and prick peoples conscious – a good thing. Thank you.

I do hope that this letter does not represent a minority opinion of academics in our country. This was a refreshing breath of air in a maelstrom of inane actions taken by school administrations at all levels of our US educational system.

I hope we see more institutions speaking up for academic freedom in all areas of study and international relations.

I don’t object to the boycott as much as the propaganda, false premises and hypocrisy that have engendered it… but more than anything else, I object to these people ignoring the facts, truth, evidence about the actions and ideology of the Islamists.

As Orwell said, “The further a society drifts from the truth, the more it will hate those that speak it.” The boycotters are not in line with anything near the truth.

Jewish Palestine is the land east of the Jordan river, Islamic/Arab Palestine is now called Jordan – that is where these people claiming Israel should be moved and relocated permanently.

It is the Arabs who invaded and are illegally occupying land given to the Jews by international agreement.

The group should be called the American Studies Society (ASS) in view of its cacophonous braying. It’s just another lunatic bunch of useful idiot hypocritical lawless, fascist obscenities incapable of rational thought or discussion, one of many epitomes of today’s “‘shut up’ they explained” mentality, by which I mean the lack thereof; no doubt they’re advisers to the current White House denizens like those who advise the Army to condemn Christians as terrorists to be suspected and deprive them of their liberties (and no doubt their lives if deemed necessary, like they do to the unborn).