Cartoon politics really is what happens in Obama’s America

Cartoon politics really is what happens in Obama’s America

Everything is political. And the race card is an integral part of those politics. 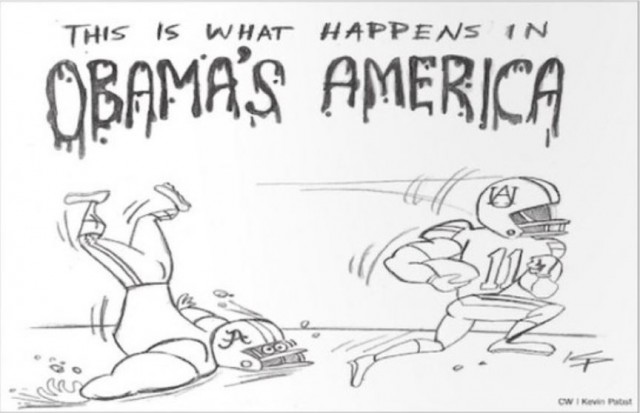 We covered the Alabama last second loss to Auburn.  Even that game became political when the Alabama student newspaper ran the cartoon featured above.

This isn’t a sports column, but there’s a reason we opened with a nine-day-old play-by-play. Back in Tuscaloosa, the Alabama loss led to a kerfuffle last week involving the student newspaper, the perplexingly named Crimson White. Its cartoonist drew a strip, published Thursday, depicting the final play under the title “This Is What Happens in OBAMA’S AMERICA.” The last two words were in massive letters, drawn in horror-movie style, with what was supposed to look like blood dripping from them.

Later that day, editor Mazie Bryant posted “A Statement From the Editor-in-Chief” in which she explained that “the cartoon was meant as satire . . . as a lighthearted look at some of the more absurd explanations given for Alabama’s collapse at the end of the Iron Bowl game against Auburn last Saturday.”Only in Obama’s America could something so obvious have eluded anyone. “Unfortunately,” Bryant noted, the cartoon “has been perceived by many readers as having racist intentions.”

Such complaints are frivolous. The cartoon had no racial overtones. True, Davis, the hero of the game for Auburn, is black, but both teams are racially integrated. It seems, however, that the “racism” complaints centered not on the drawing but on the words–on the reference to President Obama, which likewise was without racial overtones….

As it happens, this columnist has both an odd newfound curiosity about Auburn football and a longstanding expertise on campus cartoon controversies. (Our skill set is unique.) The former is a byproduct of our research into Auburn’s sham campus-justice system, which yielded an exposé on the pages of The Wall Street Journal Saturday. The latter dates back to an experience from our own college days, which this column detailed last May.

Who knew that running the Alabama-Auburn football cartoon would be the new test of journalistic courage.

Tuffy the rodeo clown received a LIFETIME ban from ever performing at the Missouri State Fair again because the Obama cultists pretended Tuffy’s humor was “racist”.

I’m really surprised the editor hasn’t been forced to resign and made to promise never to hurt the feelings of the Obama cultists ever again.

Not much different than fatwas that followed publication of cartoons that offended Muslims.

I am SO glad we have become “post-racial”.

I was just reflecting on the bad old “pre-Baracula” days when race was used as a means of deflecting objective criticism, and was all you heard about 24/7 on TV outlets…

Of COURSE this cartoon was totally out of line. If Alabama lost, it’s George Bush’s fault. Geesh.

Beware. The DOJ and the SPLC are keeping an eye on your intentions with droning journalists. Your intentions were racist and probably discriminatory long before you were even born. Therefore you are subject to elitist criticism and tongue lashings.

Yet, since our ‘team captain’ is half black and half white, I, a white American, am also incensed by such a racist cartoon which intended to make fun of white people as not understanding the black half of Obama.

I still don’t “get it” – if there’s a joke in there, it’s not jumping out at me. I usually get sarcasm and biting humor, but I got nuthin’ with this particular cartoon…..

The funny comes from understanding that all over the Alabama campus (and across the state) people are making ever-more bizarre and tenuous excuses for why Auburn beat the Tide. This is an ancient and deep-rooted rivalry and few take it lightly, at least within state borders. The joke is blaming the loss on Obama, who of course had nothing to do with it.

As Rush Limbaugh would say, the cartoonist is demonstrating absurdity by being absurd.

If the caption had referred to Bush’s America, no one would have said a word.