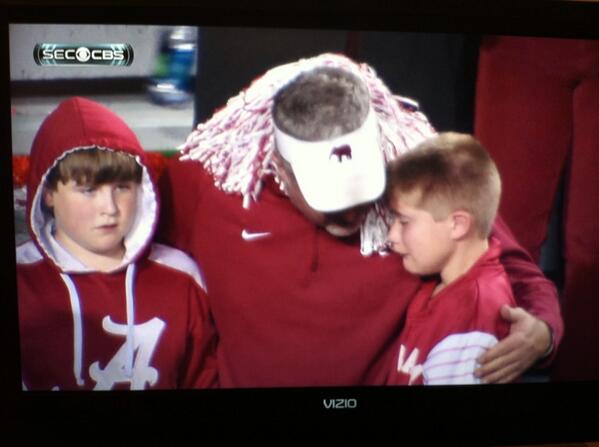 I wasn’t watching live because I didn’t really care.

But the rubbing-it-in that’s going on is quite enjoyable to watch.

(I was tempted to draw political analogies, but that would have cheapened the moment.)

The sweetness of defeating a rival, destroying a perfect season and crushing hopes of a 3rd national title all at once – amazing victory.

Nothing is sadder than being a #bama fan. Just ask this kid. #BAMAvsAUB pic.twitter.com/CAn6PbRdU2

The GIF of Auburn's second preposterous miracle victory, a 110-yard runback of a field goal to beat Alabama: http://t.co/ohqy72HXYm

If only it had been Ohio State as well.

Ain’t that the truth. I didn’t even know about this Auburn miracle so upset was I at the almost upset by Michigan.

I cut football out of my life this year, after being a thirty-year football fanatic.

Despite amazing plays like this, I am pretty glad I did. My productivity has gone up by 28%.

I’ve been getting a kick out the Saban hearts Obamacare signs that have shown up in the hands of rival fans the last couple of weeks. The hand wringing negativists need to think about just how deeply the failure of Obamacare has penetrated the culture for such an insult to be seen at established college football rivalries.

As a Canadian I have never understood America’s infantile obsession with the boring game of football. What a waste of time.

Why not do something more interesting and challenging?
Like watching hockey for example.

Me and all 16 of my teeth agree with this.

Gibbs from Team Barry, probably has a real bad headache this a.m., after spending the night on Toomer’s Corner in Auburn, AL.