A lesson in how unions buy elections, as their supporters scream about “right-wing” money. 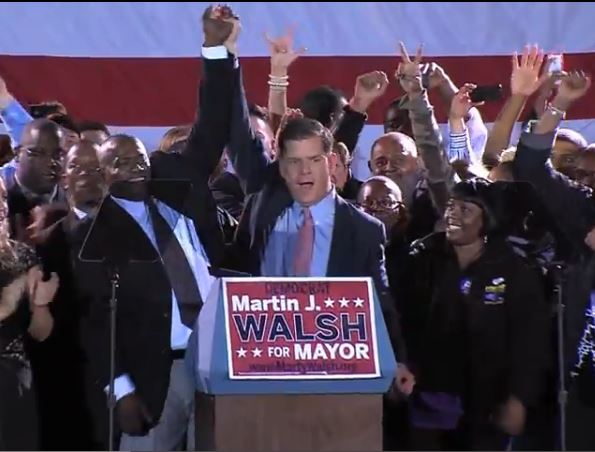 It was “just” a Mayor’s race, but it’s a tale of how unions funnel money to decide elections, often behind the scenes.

The Boston Globe has the scoop, American Federation of revealed as funder behind mysterious pro-Walsh PAC during mayoral campaign (h/t @dbernstein):

Organizers of One Boston, the mysterious political action committee that dumped $480,000 into the Boston mayoral campaign during its final days, confirmed to the Globe today that the American Federation of Teachers funded the group’s efforts to swing the race in favor of Mayor-elect Martin J. Walsh.

In a complicated series of transactions, the AFT — a powerful national teachers union — gave the money to One New Jersey, a teachers union-backed political action committee. That group then donated those funds to One Boston, a local affiliate set up to spend money in the Boston mayoral race.

One Boston used that money for a pro-Walsh television commercial that ran during the final week of the mayoral race….

The only name listed in documents associated with the group is Jocelyn Hutt, a 55-year-old woman from Roslindale who, city records show, had not voted in three of Boston’s past four municipal elections. It remains unclear what role Hutt played in setting up One Boston as well as if she is linked formally to One New Jersey.

Because New Jersey has less stringent campaign finance disclosure laws than Massachusetts, One New Jersey is not required to disclose where its money came from.

These shenanigans didn’t change the party to win the race — it always was going to be a Democrat — but it did put the union’s guy in office.

I just impressed that we still have teachers that can handle numbers that large. Maybe they ought to take up teaching for a living instead of politics.

Boston has recently also published an equity index laying out the Agenda 21 vision it wants to see enacted. It is ground zero for many of the curricula like Primary Sources that are key components of the actual K-12 ‘reform’ implementation. The urban districts have long been piloting what is now being expanded to the suburbs in the name of the poorly understood Common Core. This was no time for there to be any chance of not having a mayor amenable to transformational change

For their next trick, AFT will complain (again) about Citizens United.