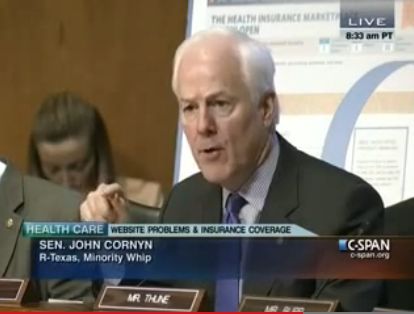 HHS Secretary Kathleen Sebelius testified before the Senate Finance Committee this morning on the troubled rollout of HealthCare.gov.

Not surprisingly, Sebelius was pressed on the President’s promise that “if you like your health plan, you can keep it,” a promise that’s been repeated in various forms numerous times, including on the White House website.

Senator John Cornyn, R-Texas addressed the issue with Secretary Sebelius. “We know that lying to Congress is a crime, but unfortunately lying to the American people is not,” Cornyn said. “I’d just like to ask you a simple true or false question. Is that statement on the White House website true? Or is it false?”

And in another exchange, Cornyn addressed with Sebelius the issue of background checks for Obamacare navigators.  Navigators can assist individuals in exploring coverage options on the Marketplace, “including completing eligibility and enrollment forms.”

“Isn’t it true that there is no federal requirement for navigators to undergo a criminal background check, even though they will receive sensitive personal information from the individuals they help sign up for the Affordable Care Act?”

Sebelius calmly responded, “That is true. States could add an additional, um, background checks and other features, but it is not part of the federal requirement.”

“So a convicted felon could be a navigator and could acquire sensitive personal information from an individual unbeknownst to them,” Cornyn pressed.

Sebelius responded, “That is possible. We have contracts with the organizations and they have taken the responsibility to screen their [inaudible] navigators and make sure that they are sufficiently trained for the job.”

Watch the full exchange below.

For John Cornyn, it’s too little too late for me and a lot of other Texians. When he voted for cloture on defunding ObamaCare, while the real Texas Conservative and Mike Lee stood tall for America and the Constitution, that did it.

I got a call from his campaign yesterday, and I just laughed and hung up on them.

I am all in favor of laughing and hanging up on Cornyn and others who sold us out. However, I think you should take a moment to snarl something at them that explains your response. Otherwise they might conclude that you’re further left than Corny (misspelling intended) and that you object to him because he’s too conservative. Make sure they learn something from your response — then be as rude as your mother would allow.

They call me for a reason. I’m a former supporter, on their call list. A Parthian shot is just that, not a long goodbye.

Sebelius spins rather than testifies. Already some four million know they will lose the plan they liked. Those that would like to keep their full time job if they liked it, but are made part time, are not measured. This is just the first PURGE.

Costs are going up for the vast majority, while there is no indication those that are “pro-choice” and uninsured, will now choose to sign up for expensive plans. So costs for the responsible will continue to escalate for the responsible. And when the exemptions for the employed folks ends next year, there will be an even larger PURGE.

None of this will be funded, because young healthy people have much less incentive now than before, as costs are higher than ever. And people that had a good plan will either drop insurance now, or be forced into the expensive exchanges.

Is there a level of working class that gets free insurance and is actually helped now? I really haven’t seen those stories. That class is instead being pushed into part time work, since employers can’t afford the expensive plans. The fraud and abuse of the system is not touched, as those guys have lobbyists.

The good thing, from a political standpoint, is that when those plans get cancelled next year during the normal benefit enrollment cycle for private companies, it will be in the October-November time frame, right in time for the election. Unless, of course, Prezz-O-Bamma waves his magical EO-Wand and makes everyone exempt for a year.

I doubt it BO will do anything to stop this ship. BO has a legacy to defend, and he will come hell or high water.

Arghhh … not stop this ship.

We continue to analyze things as if we were in a rule of law society, and that gives us false comfort. We are in a lawless society. Is it too large a task for obama, through HHS, to cause the October-November 2014 time frame you mention simply to be pushed into 2015? Whose to stop them from doing that?

This is not working.

What I mean is this: Instead of gleefully pointing out that Obama lied, and having all his minions say “no he did not”

What we SHOULD be doing is this:

“We realize that this problem of people losing their healthcare is purely due to regulatory guidance. And we know the President would not lie. So, we’re not blaming the President, we just need to know the date when that regulation is going to be expunged or rewritten.

The President is not a liar – so all he has to do is tell Sebelious to fix the regulation. Next week?”

The point is it puts him in the position of either fixing the lie, or owning it.

Cornyn, who helped mcconnell and the Senate RINOs knife Cruz and Lee in the back, is a despicable hypocrite who must be replaced in the Senate by a responsible Texan.

Why don’t the Republicans have people who lost their insurance testify? Put human faces on this mess.