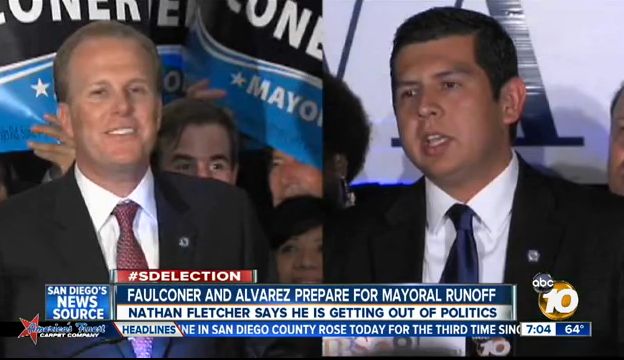 It looks like Gloria is going to continue in that role for a bit longer, as the results of the November 19th special election produced two candidates for a run-off.

As of 11 p.m. local time Tuesday, Republican Kevin Faulconer led a field of 11 candidates with 44 percent of the vote, giving the GOP a chance to recapture an office they held for much of the last four decades and an opportunity for a rare win leading a major American city.

David Alvarez, a first-term city councilman, had 25 percent. Nathan Fletcher, an executive at wireless technology titan Qualcomm Inc. and former state assemblyman, had 24 percent. Alvarez had trailed Fletcher for most of the evening, but had pulled ahead by 1,456 votes as the clock ticked past 11 p.m.

Post-election analysis shows a combination of Latino voters and union support helped carry Alvarez into the next phase:

The city’s burgeoning Latino population helped propel a native son and child of Mexican immigrants into a mayoral runoff against a fellow city councilman to replace the disgraced Bob Filner, who resigned amid sexual harassment allegations.

David Alvarez, a first-term Democratic councilman, began the short campaign with far less name recognition than some rivals but defeated them with heavy financial backing from organized labor and support in Hispanic communities.

And while San Diego has a history of picking GOP mayors, a local pundit worries that the same combination may mean that Faulconer has an uphill struggle to win in the next election in 2014, which has yet to be placed on the schedule. The Liberator Today offers these suggestions for the GOP candidate:

A casualty of this election is former Republican, turned Independent, turned Democrat…Nathan Fletcher. After three elections under three different banners failed to produce a win, he has decided that this may not be a successful career path:

…Nathan Fletcher, standing in front of TV microphones near La Jolla Cove, said, “Today, I am leaving public life. I leave the pursuit of elected office.”

To explain his exit from the political stage, Fletcher, wearing blue jeans and a white dress shirt, spoke about the specific “phases” of his life.

It looks like San Diego is entering a fun new phase of its mayoral cycle. Stay tuned!

And should the *Frito Bandito not win, guess what they will hear..
*http://en.wikipedia.org/wiki/Frito_Bandito

I still want to know how Fletcher, who came out of the Marine Corps as a sergeant, with a degree in Political Science, and who never ran a business, is the Senior Director of Corporate Development for Qualcomm, and paid $220,000/year.

Something smells there. And it smells like Qualcomm, which is headquartered in San Diego, was investing in a future mayor.

Now that Fletcher says he’s done with Politics, we’ll see how long he has a job at Qualcomm.

While the Fletcher issue stinks to high heaven as MikeInCA correctly notes. It is more important that the red tide of unionism be stemmed in my home town. Brian Brady has excellent analysis, along with the commenters on his San Diego Rostra post.