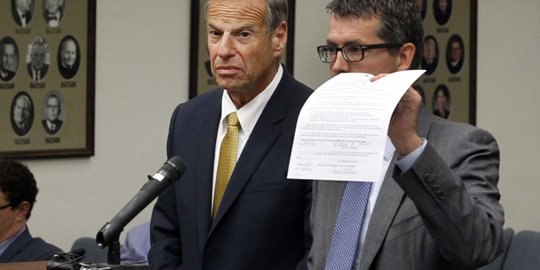 In news that is almost as surprising as the San Diego Chargers’ 19-9 Win over Indianapolis during Monday Night Football, it seems our former mayor is taking a trip down the road of personal responsibility.

Bob Filner (Democrat) has plead guilty to three separate sex harassment charges; the conditions of his sentence include confinement, probation, and a prohibition against serving in office again.

Former San Diego Mayor Bob Filner’s professional and personal collapse continued Tuesday when he pleaded guilty to three criminal charges that he grabbed and fondled women during his brief time at City Hall.

The 71-year-old Filner pleaded guilty to one felony charge of false imprisonment and two misdemeanor charges of battery at a hearing in San Diego Superior Court.

The former 10-term congressman’s pleas came just two days before a criminal grand jury was set to hear evidence against him. As part of the plea deal with the state Attorney General’s Office, Filner will not face any jail or prison time.

Instead he will be sentenced to three years of probation. He will also have to serve three months of home confinement and will be banned from ever seeking or holding public office again.

Filner will also have to seek mental health treatment and surrender the portion of his pension earned after March 6, the date of his felony offense.

The terms of the deal are intriguing, especially as Filner blamed his resignation on a media “lynch mob”  during a speech that followed the public revelations of 17 separate victims of his famed “headlock” and “dance” maneuvers. If the trail had gone forward, it would have been fascinating to have heard the accounts of 90 potential victims and witnesses who called the San Diego County Sheriff’s Department Special Hot Line:

San Diego County Sheriff Bill Gore said his deputies interviewed around 90 people in response to more than 200 calls received by the department’s dedicated phone line in the Filner case.

What began with two investigators soon swelled to a team of five. Deputies met with alleged victims, documented their stories and reviewed electronic and hard copy documents.

They gathered the facts and then sent them to the prosecutors for consideration.

Gore would not go into how many actual victims his department handled since he said some of those who contacted them described conduct that did not rise to the level of criminal conduct or did not meet the statute of limitations.

“It was definitely shocking to hear some of the stories we had to hear,” said one of the deputies on the team Det. Kristin Brayman.

Meanwhile, polls indicate that the race to be the new mayor is tight among the top three candidates:

Nathan Fletcher remains the front-runner in San Diego’s Nov. 19 special mayoral election, but Kevin Faulconer is closing the gap and David Alvarez is garnering a little more support, according to a new U-T San Diego/10News poll.

The poll of likely voters shows Fletcher leading with 32 percent compared to 28 percent for Faulconer and 20 percent for Alvarez.

Hopefully, from this point forward, the only thing out of San Diego that will shock people will be related to this success of our football team.

Huh. I could have sworn he said he didn’t do anything wrong and that he was being lynched by his political enemies in his resignation speech. Who knew that Kamala Harris would be leading the anti-Filner mob?

At first I thought this sexual preditor was a Republican but that designation wasn’t in the first sentence so I knew he must be a Democrat….and sure enough, two-thirds of the way down the second page is the implication: “After 20 years in Congress, Filner had come home to become the city’s first Democratic mayor in decades…” Wonder how many interns and congressional staffers had to suffer his behavior?