Report: Obama aides debated “you can keep your plan” promise

Report: Obama aides debated “you can keep your plan” promise 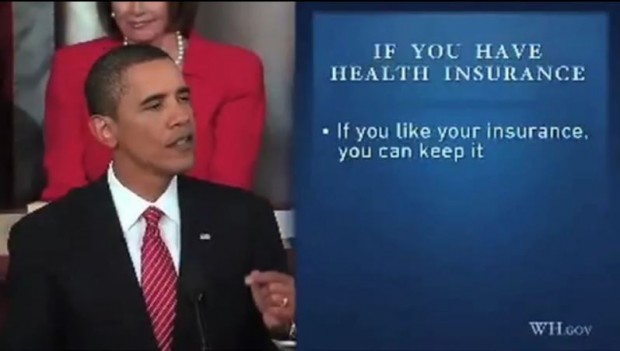 The Wall Street Journal has published this report that Aides Debated Obama Health-Care Coverage Promise, revealing that some questioned whether the promise was one that could actually be kept.

But apparently, it was important that the President’s message not be cluttered. Pesky details.

As President Barack Obama pushed for a new federal health law in 2009, he made a simple pledge: If you like your insurance plan, you can keep your plan. But behind the scenes, White House officials discussed whether that was a promise they could keep.

When the question arose, Mr. Obama’s advisers decided that the assertion was fair, interviews with more than a dozen people involved in crafting and explaining the president’s health-care plan show.

But at times, there was second-guessing. At one point, aides discussed whether Mr. Obama might use more in-depth discussions, such as media interviews, to explain the nuances of the succinct line in his stump speeches, a former aide said. Officials worried, though, that delving into details such as the small number of people who might lose insurance could be confusing and would clutter the president’s message.

“You try to talk about health care in broad, intelligible points that cut through, and you inevitably lose some accuracy when you do that,” the former official said.

The former official added that in the midst of a hard-fought political debate “if you like your plan, you can probably keep it” isn’t a salable point.

Given all the reports of those getting booted from existing health insurance plans, regardless of how some may try to justify the plans being dropped, I think the aforementioned second-guessing was appropriate.

Read the whole thing at the Wall Street Journal.

“You try to talk about health care in broad, intelligible points that cut through, and you inevitably lose some accuracy when you do that,” the former official said.
The former official added that in the midst of a hard-fought political debate “if you like your plan, you can probably keep it” isn’t a salable point.

Better to give those stupid masses narrow, simple lies.

Correct: This was an intentional, evil, purposeful, blatant lie. The junk in the WSTJ article is an attempt to turn the intentional lie into a possible error of judgment along the way of trying to do the right thing.

Would you be surprised to learn that the Republicans actually tried to fix the “grandfather” issue back in 2010? Personally, I’m opposed to Republicans trying to “fix” Obmacare, but they did try back then. Today, Powerline posted Lies of Obamacare, Documented – a great article which contains the text of Mike Enzi’s September 29, 2010 floor speech:

Mr. President, the resolution we are debating today is about keeping a promise. The authors of the new health care law promised the American people that if they liked their current health insurance, they could keep it. On at least 47 separate occasions, President Obama promised: “If you like what you have, you can keep it.”

Unfortunately, the Obama administration has broken that promise. Earlier this year, the administration published a regulation that will fundamentally change the health insurance plans of millions of Americans. The reality of this new regulation is, if you like what you have, you can’t keep it. The new regulation implemented the grandfathered health plan section of the new health care law. It specified how existing health plans could avoid the most onerous new rules and redtape included in the 2,700 pages of the new health care law. …

Unfortunately, the regulation writers at the Departments of Treasury, Labor, and Health and Human Services broke all those promises. The regulation is crystal clear. Most businesses–the administration estimates between 39 and 69 percent–will not be able to keep the coverage they have.

Under the new regulation, once a business loses grandfathered status, they will have to comply with all of the new mandates in the law. This means these businesses will have to change their current plans and purchase more expensive ones that meet all of the new Federal minimum requirements. For the 80 percent of small businesses that will lose their grandfathered status because of this regulation, the net result is clear: They will pay more for their health insurance.

The democrats now OWN this fiasco.

P.S. My wife had her health insurance cancelled.

Not sure of this, but one aspect of those rules seems to including raising rates more than maybe $5 a month, based on Sebellius’s statement before Congreess that $1 wouldn’t be enough, but $5 was. And, of course, premiums do go up over time to keep pace with health care inflation. Either coverage must be reduced, or premiums increased because of that inflation. If the true believers in her department really did include premium costs in their rules about grandfathering, they made sure that pretty much every individual policy would ultimately be cancelled.

One of the most perverse aspects of this travesty is that a law requiring everyone to buy insurance (if they don’t get it through an employer) imposes such a nasty penalty on the very people who have been buying insurance straight from their own bank accounts all along: “Yeah, yeah, you think you’ve been doing the responsible thing, but we’re going to make it a lot harder for you to keep doing the right thing.”

That is so morally repugnant, it’s amazing even from Democrats.

Then there’s Obama’s punky “Hey, it’s only 5 percent of the population!” taunt. Which it isn’t — certainly not when it all shakes out. But for the sake of argument, let’s say it is: Since when is it okay for the government to do direct and unnecessary harm to a segment of the population as long as it’s “only 5 percent”? How does the party that considers itself the compassionate party have the gall to make such a case?

…but Democrats ARE morally repugnant. They support slavery. they support death. They hate the Constitution. Their goal is to turn America into a Facist state.

What percentage of the European population did 6 million Jews constitute? Apparently, according to progressives, as long as it’s sufficiently small, it really doesn’t matter. Fascism is ever the end goal for these moral troglodytes.

Typical Obama elitism. Got to dumb it down for the dumbmasses.

And the political damage from this, and all the other lies will be…zilch, nada, nothing. The MSM media was part of the original lie(s) and will be part of the cover-up(s). Hate to be so pessimistic but that is where we are.

I wonder where we would be if Obama hadn’t delayed the mandate on big corporations?

Did he act like he was doing them a favor, when he gave it?

One hundred fifty years ago Barack Obama’s calling would have been selling snake oil to the unwitting out of the back of a conestoga wagon.
Today, Barack Obama’s calling is the selling of political snake oil to the uninformed.
He got away with the “Let it be known that today was the day the oceans stopped rising and the planet began to heal” whopper from the floor of the Faux Greek temple in Denver. He got away with the sending of two thousand heavy weapons into Mexico in his blatant attempt to destabilize the government of Conservative Mexican President Felipe Calderone and unleash a wave of Mexican immigration into the United States resulting from the civil unrest large enough for him to demand citizenship for the new arrivals as a humanitarian gesture. That was the work of a few rogue ATF agents, remember.
He got away with the lie of a spontaneous demonstration over some internet video being the cause of the deaths of the American Ambassador to Libya and three others in Benghazi.
He got away with the lie that the targeting of Conservative groups by the IRS was the work of four rogue agents in the Cincinnati office.
You have to start wondering what course in NYU’s Master’s Degree Program in Fictional Literature Writing Deputy National Adviser Ben Rhodes was introduced to the old propagandameister Joe Goebbel’s adage “If you tell a lie often enough, the people will believe you”
If Obama survives this, the next three years will be an unending stream of lies, subterfuge, and obfuscations that will make the lies of the previous six pale in comparison. Count on it

I just got a call from the democrats begging for money at a level to help them win back the house. You can imagine what I said.

He asked what I am now, since it was obvious I am not a democrat anymore. I told him I was an American who loves the Constitution and the rule of law. That was when he started trash talking the tea party. I said that is a lie and he said no, I worked for them I know it is true. I said you are lying it is obvious you know nothing about them. We went back and forth till I hung up.

They haven’t called me in a long time they must be getting desperate. And usually when they realize their mistake they end the conversation and hang up, this one wanted to stand and fight,I wonder what that means.

There are some very smart MIT bound students holding up america’s numeracy rankings at number 25 globally for school students.

This level of understanding allowed Obama to state false numerical & get away with it.

The fish has rotted from the head (i.e. fundamental corruption) and tail (i.e. progressive corruption), which is incrementally consuming the body (i.e. dysfunctional convergence). Everyone wants a piece of the rotting fish. It’s notable that America spends more on educating people than any other country and is only sixth or seventh in quality of education. The voluntary and involuntary investors must be disappointed with their decaying return.

That said, there remain a lot of accumulated wealth in this country. We will continue to enjoy unicorns and rainbows, or at least their promise, for the foreseeable future.

Our President is leading from his behind.

Wait, wait, just because Obama’s aides debated the health care promise doesn’t mean Obama knew about it. He could have been golfing or playing basketball.

Paradoxically, Democrats disapprove of democracy and individual choice, and are virulently opposed to diversity. They resent Planned Government and personal privacy.

[…] aides also encouraged him to lie because the truth wouldn’t […]