No, you cannot keep your Obama Halloween costume even if you like it

No, you cannot keep your Obama Halloween costume even if you like it 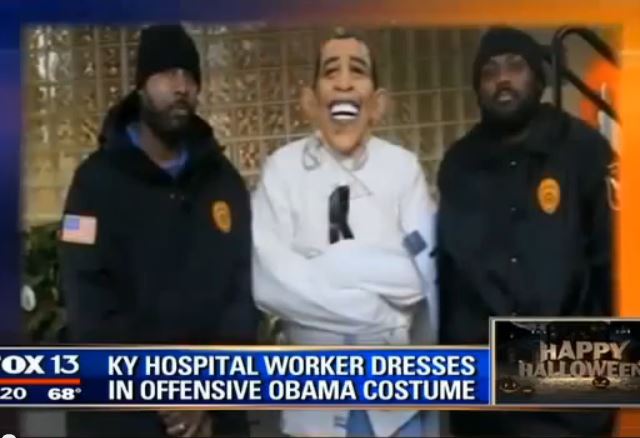 In some countries, making fun of the President results in collective punishment

I would not want to live in such a country. Oh, wait.

At a Kentucky Hospital Halloween party some guy dressed like Obama in a straitjacket.

No, you cannot keep your Obama Halloween costume even if you like it.

Hopkinsville, KY – – One Halloween costume is scaring up plenty of controversy along the Tennessee-Kentucky border.
A person dressed as President Obama wearing a straitjacket is generating lots of complaints….

“I think it’s very offensive and really that shouldn’t have happened,” Timberlake said. “There are other characters they could have dressed up and put a straitjacket other than the President of this country,”

Administrators of the hospital agree releasing a statement saying “no matter who the president is they deserve respect and honor.”

Joe turner is the Vice Chair of the Christian County Republican Party and he points out President Obama isn’t the first to be made fun of on Halloween and believes this costume makes an amusing statement inside a hospital.

As a result, all 750 employees have now been required to take diversity training. The VP of Human Resources at the medical center issued a statement to staff apologizing for anyone who was offended and personally took responsibility since the incident occurred on his watch.

Somewhere a Rodeo Clown is crying because the country has lost its sense of humor.

Vaughn Meader and Rich Little would be felons in America today. Meader would probably be considered an accomplice in Kennedy’s death.

Well, you know, if someone is offended … (Paging Bob Costas!) But if you’re one of those 93 million schmucks losing your health insurance,then that’s different.

…the country has lost its sense of humor.

I don’t agree with that statement, entirely. It’s the liberals that don’t have a sense of humor.

And you can’t lose something you’ve never had.

I don’t agree with that either. Liberals have a profound sense of humor when it comes to lampooning Republicans.

” Liberals have a profound sense of humor when it comes to lampooning Republicans.”

This claim is going to require some evidence. Liberals excel at vindictive name calling, at ad hominem attacks and the non-sequitur, but humor is beyond them.

One reason I stopped listening to Garrison Keillor is that he refused to believe Barack 0bama was elected in 2008. For years afterwards he kept telling George Bush jokes even though George wasn’t the President anymore.

Its worse than that, Milwaukee: Keillor is still telling Jesse Ventura jokes. But somehow the concept of “Senator Al Franken” doesn’t register with him. Lame to the max.

I look forward to the revolution that ultimately must come.

I look forward to the day when political correctness, diversity, liberalism and socialism are nothing but bad memories.

But will it occur during my lifetime?

We could progress a ways by eliminating the first on your list.

There is and never was a right not to be offended although it is increasingly enforced, even extending to private actors.

Eventually, no one will speak his or her mind.

Obama offends me on a daily basis. Can we force him to submit to re-education and diversity training?

An orange jumpsuit, rather than a straitjacket, is attire suitable for him.

When I was a kid one of the most popular rubber masks for several Halloweens in a row was the Richard Nixon mask, and people called him every name in the book.

Presidents since George Washington have been mocked and ridiculed and joked about in this country. But apparently there’s something . . . “special” . . . about Barry Obama that makes him off limits.

Hmmmmmmm. I wonder what it could be . . . ? And hey, didn’t it used to be raaaaacist to suggest that different standards should apply to black people?

This is a dangerous trend of thought-control. When you can’t criticize, that means freedom is OVER.

Obama despises Americans. We need to say this over and over, loud and proud, until our country is saved, or at least individually, we are saved.

Wannabe despots can only be prevented by identification and resistance.

Obama didn’t do this. The fake big shots are much lower on the food chain.

The Ten Commandments make it clear.

Obama is a jealous mortal god. Thou shall not take
the [image] (name) of the lord your god in vain.

It’s unfortunate that neither the supplicants nor their mortal god respect the other commandments. Their god demands [human] sacrifice and tributes.

diversity training is a subset of progressive corruption

This is not a new phenomenon. This is, however, a progressive process. Their name describes both their commission and strategy.

“Administrators of the hospital agree releasing a statement saying ‘no matter who the president is they deserve respect and honor.'”

We must have diversity, but everyone must be diverse in the same way!

Their concept of diversity is shallow and narrow-minded. However, its exploitation has been extremely profitable to their bottom-line. They are not supremacists in the popular sense. They are selfish in the classical sense. Their selective deeds notwithstanding.

I would show up at the diversity training in an Obama mask.

Sorry, the American right to haze politicians is sacred.

In San Diego, three teachers were suspended for dressing up as the Jamacan bobsled team, and *gasp* wearing makeup that somebody said was blackface.

The NAACP settled for having them suspended instead of fired, saying that this happens every year.

I think the real sin here is a white person trying to look black, and if the NAACP has time to deal with such trivialities, its organizational purposes, whatever they once were, have been achieved.

Where does it say that the man in the mask is white? Two out of three people in the skit are Black. Isn’t it racist to assume that only a white person would make fun of Dumbo Ears?

That’s a relevant point. Several hundred thousand black Americans never selected him as their representative. I would imagine that number has grown with the economic stagnation that has developed during his time in office.

Remember the outrage when caricatures of Condoleeza Rice were displayed in major news outlets? Or the push back by the press when Herman Cain was stereotyped as hitting on white women? Or when the media jumped to defend Ben Carson when he was audited by the IRS after making negative remarks about Obama? So yes, there is a standard of what is and is not acceptable.

Hey Democrats! I’ll give your president the same amount of respect you gave mine.

Where was Timberlake during the days of Bushhitler, ChimpyMcBush, and all those assortment of invective. Diversity training needed for wearing a Halloween mask that makes a political statement? The guy should sue the hospital for trampling his First Amendment rights. The hospital administration is basically converting a political statement into a racial one and saying little mean-spirited tin god cannot and must not be mocked, because he is black, you know, upon pain of re-education. That sentiment is racist, The next step will be death.

“The guy should sue the hospital for trampling his First Amendment rights.”

Agreed. For some reason, I was under the impression that this was a public hospital. If so, then there would be state action to restrict expression.

Oprah claimed Obama is The One, Obama seems to believe it, and his whole cult of followers seem truly enraptured (with him AND themselves). They are all genuinely “crazy”.

So political cartoons of the president are OK, but free speech doesn’t extend to Halloween partiers?

Where was the outrage when people were wearing Nixon masks, Carter Masks, Reagan masks, Clinton masks??? Suddenly it is disrespectful to wear these masks? Or is it just the mask of the Chairman General Secretary Obama? This coountry looks more like Communist China or the USSR every day. I hope Americans wake up and see what is happening to this country!

In retrospect, it is certainly suitable for one to wear an Obama mask when robbing a bank. Bringing a teleprompter would be a nice touch.

So how do we ALL get costumes like that to wear in the next ‘mask-in’??

Strangely enough, I went looking for an Obama mask this Halloween and couldn’t find one.

You can make fun of any President you like.
Reagan, Bush, Lincoln, Washington, Carter, any one you choose.

But you better not ever make fun of Obama!!!!
Nobody makes fun of the Obama! You hear? Nobody!
The Obama is never to be lampooned.
Offending even one of the Obama’s supporters may end your career. You shall be made to grovel and beg forgiveness for treating the likeness of the Obama in any way other than with the utmost respect.

Tremble with fear at the thought of blaspheming the Obama.

Your rather erudite post does not state who you are going to choke – the wearer or the authority.

Well, they better start getting used to it. Jimmy Carter has been a laughingstock for over 30 years, and he was almost competent compared to the buffoonish Obama.

He’s going to be the object of ridicule from now, on.

Suck on it, fools.

In Holland when the Nazis cracked down on Jews, everyone showed up with the identifying mark. Where is the courage in this country. Would we all wear that costume? I think I would.

Was there enforced diversity training when Bush was made fun of? I don’t recall any such thing. My collective memory must be slipping.

The diversity police had better round up all of the political cartoonists. You know how they can be.

This parallels the fear of drawing Muhammad, the bloody sworded warrior, leader of the religion of peace. Obama’s leadership is also the opposite of the sales pitch, yet pointing that out is sacrilegious.

“The VP of Human Resources at the medical center issued a statement to staff apologizing for anyone who was offended and personally took responsibility since the incident occurred on his watch.”

Used to be, when something bad happened on your watch and you took responsibility for it, you quit your position, if not your job.

Now, taking responsibility means punishing 750 other innocent people, keeping your job AND your position, and probably getting a commendation and a raise.

I guess that’s “responsibility” in the Age of Obama.

Redistribution. They redistribute others’ money and property inward and their own shames and responsibilities outward.

If this is the same guy, he’s black. Curiously, his brother Ravi is also listed as a “VP of Human Resources” at jsmc.org

Considering that the Jennie Stuart Hospital in Hopkinsville rates below the national average on many indicators, diversity training may not be the most needed training there: