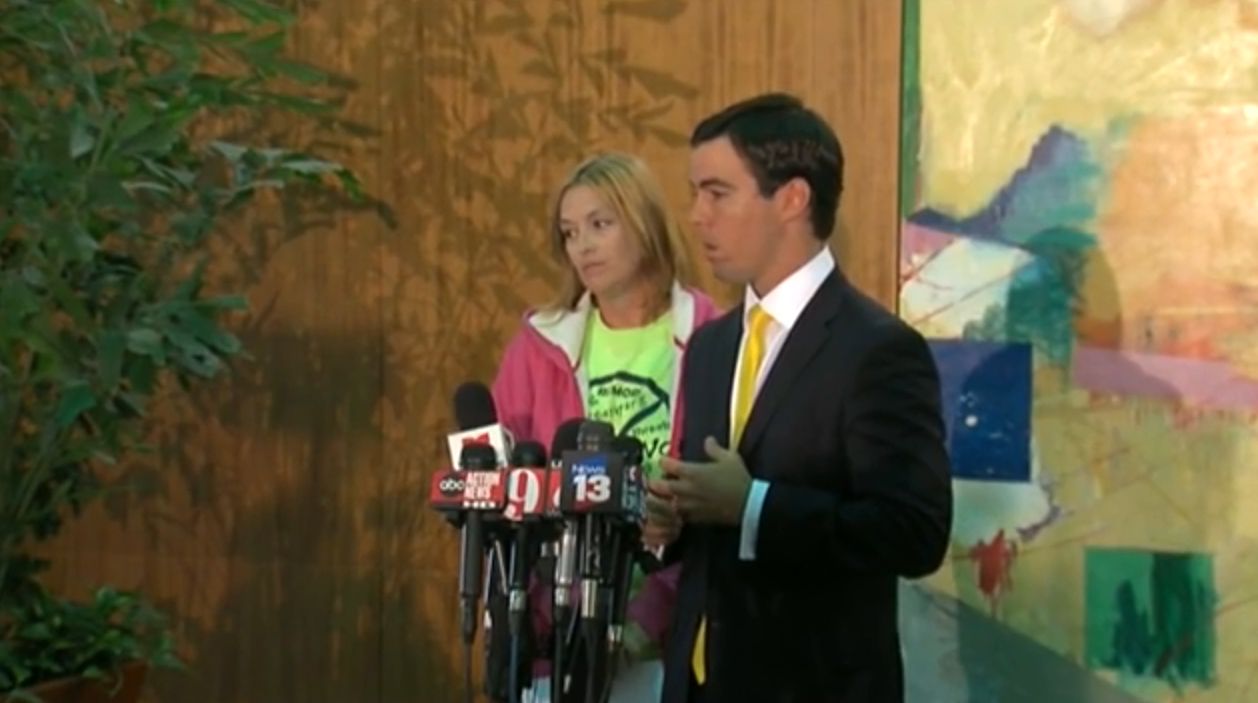 Tricia Norman, the mother of Rebecca Sedwick, said on Monday while accompanied by her lawyer that she intends to file wrongful death lawsuits in a civil court in relation to the alleged bullying endured by her daughter.  She and her lawyer also said they will pursue new laws aimed at curbing bullying.

From the Orlando Sentinel:

The mother of a 12-year-old girl who committed suicide following months of alleged cyber-bullying plans to pursue changes to state and federal law, as well as civil lawsuits against her daughter’s bullies, she and her lawyer said today.

Matt Morgan, an attorney for the mother of Rebecca Ann Sedwick, promised a “crusade” against bullying during a press conference today in Orlando.

That will include pursuing a new state law — dubbed Rebecca’s Law — to criminalize bullying, a new federal law requiring schools to follow strict procedures to curb bullying and civil lawsuits against Rebecca’s bullies, he and his client said.

“Bullying has become a problem of epidemic proportions within our society,” Morgan said.

Morgan added that his firm has “support at the highest levels for” the proposed Rebecca’s Law, though he didn’t specify which lawmakers will sponsor the proposal.

In the meantime, “we intend to use the civil justice system to change behavior while we wait for our legislation to go through the proper channels,” Morgan said.

Last week, charges were dropped against the two girls who had previously been charged with aggravated stalking in relation to the Rebecca Sedwick case.  At the time of their arrest, Polk County Sheriff Grady Judd held the girls’ photos in front of news cameras and publicly announced their names during a press conference. A police statement alleged that the two had “repeatedly and maliciously harassed” Rebecca Sedwick for months.  School officials intervened during some of those encounters, suspending the younger girl from school after she’d had a fight with Sedwick nearly a year ago.  Law enforcement officials alleged that the older of the two girls, whom they claim was the “primary bully,” encouraged the younger girl to fight with Sedwick.

Last month, the Polk County sheriff’s office also released a series of Facebook chats between some of the girls.

Jose Baez, the attorney for the younger of the two girls previously charged, has maintained that there was no evidence of any criminal behavior from his client.  He has indicated that some of the things said by his client were in reference to the fight the two had nearly a year ago.  He said his client felt guilty about having been unkind to Sedwick during that time, as the two had been friends.  The younger girl’s father also said Sedwick and his daughter “had a confrontation at school, they had a fight, and then it was over with.”

There have also been reports that Sedwick had a troubled home life, and Jose Baez has said his client herself had gone through some problems of her own, including having been bullied.

Sedwick’s mother told reporters Monday, “I have decided to file wrongful death lawsuits in a civil court against the individuals I believe are responsible for my daughter’s death.”  Her lawyer declined to name the individuals they intend to sue.

Norman’s lawyer said, “As a firm, we have created an entire department which will deal with nothing but bullying and individuals who were bullied and suffered damages as a result of said bullying.”

The lawyer also issued a warning to parents: “Monitor your child’s behavior.  If you believe that they are bullying another, you must take the steps necessary to make sure that it doesn’t happen again in the future, it has to stop immediately.  Because if it doesn’t, you may find yourself on the wrong side of a lawsuit with your personal assets in jeopardy.”

While I am sympathetic to the victims of bullying, and to the family of Rebecca Sedwick, this is where I start to feel conflicted about the solutions.  Speaking generally and not to this specific case, to start, I think the issue of bullying is often more complex than simply “this person/people bullied this person.”  And in the unfortunate instances of suicide, there are often other potential contributing factors.  Lastly, as I have mentioned previously, new laws often have unintended consequences.  In the midst of emotional cases, those potential unintended consequences often go overlooked.

Yet another example of why we need a “loser pays” system in civil suits.

It is very sad this little girl took her own life. But Mom, the time to be concerned was a while ago. Now you’re just grabbing for loose change.

Oh, and we should have a limited open season each year on all trial lawyers, too.

You know, I am now seriously considering downgrading you for using the word “limited”.

Omg . Another side parting.

Double downing . A side parting ho with a lawyer.

And the “chickafication” of our society continues. Who among the readership has never been bullied? And who among us is damaged forever by such bad experiences?

I learned and taught my sons that the only way to stop a bully is to make the hurt go both ways. When punched – punch back – and I showed them how and where.

Perhaps Mommy didn’t do right by her baby?

I don’t know the specifics of this family nor this case.

But as a general rule adverse childhood experiences correlate with suicide rates over a lifetime like nothing else does (also with just about every other problem one could have). These are usually as a result of parenting. Bullying at school could do it too, of course, and there may be some interrelationship.

Knowing as I do the degree to which parenting is, over a lifetime, responsible for the majority of suicidality, I have reservations about seeing parents profit over their child’s suicide. Not only because of financial reasons, but also such an effort may help them to shift their portion of the blame elsewhere, which provides no social incentive for better parenting in society since many parents are motivated more by self-interest.

It seems like there would be some First Amendment implications for any anti-bullying laws that might be proposed. I haven’t seen a draft of the actual language that they will be putting out there, but I fully expect that there would be some restrictions on the exercise of free speech.

I wish her success.

Hope none of you every go through bullying.

Maybe you guys misunderstood me. I am wishing success to the woman who lost her daughter if she files a lawsuit.

I feel very strongly about this. Yes, it is emotional, very much so. I was bullied for several years by the meanest women I could imagine, all because I was trying to do the right thing. I did stay strong although I don’t know how I did, my life crumbled for a long while. It is a horrible thing to do to a person(s). It is epidemic now because it is being swept under the rug. Places like FB are guilty of it and there seems to be nothing you can do about it. The people I dealt with were not on FB as this was before it’ time; but it’s the same thing. To shut one down for power. In realty people that do this type of thing are cowards.

I just wouldn’t wish it on my worst enemy.

This case isn’t about bullying as much as it is about female socialization. Yes, boys do this too, but not nearly as much and for the most part, aren’t nearly as sensitive as girls.

Suicide sucks no matter the age of the victim, however and looking for a place to assign blame is human nature. Not everything should be dealt with by the legal system… or even the political system….

As a parent, there is always more you can do if you absolutely must. I know parents who have picked up their lives, cut ties with family and moved across the United States in order to protect their sons from the Gangs in Chicago and New York and the cartels on the Borders.

Can’t help but think that some fathers somewhere in the picture might have made for a different outcome.

One of the biggest problems that Liberals have created is the idolization of single mothers.

No new laws based on victimology that can be corrected without laws. Parents have to raise their children to live amiably in society. We don’t need some moron developing a new law which will have all manner of unforeseen and unintended consequences. We are losing our freedom over specificity law making. We are becoming cribb’d, cabin’d, and confin’d by laws, wrapped up in its thickets so we cannot see our way clear to pursue happyness as our founding documents indicate we have a right to. We need to trim the thickets rather than add new laws, even as we try to give the devil his due and ensure that we have laws to hide behind when he turns on us.

My guess is that during discovery there will be much to be found in this young girls home life.

And you have to wonder if her lawyer advised her of this probability. Cripes, her lawyer looks like he just got out of high school. Lack of experience? Youthful enthusiasm rarely cuts it in court.

Would someone please define “bullying” for me such that anyone charged by the state with such a crime — or expelled from school because of accusations — would have had advance notice of exactly what behaviors were outlawed? Huge difference here between a civil wrong and a crime.

Words have no power over an individual except what the hearer gives them; words are simply sounds (or squiggly lines) representing an idea, person, place, action etc. We have been telling an entire generation “you can’t say this word, and you can’t say that word because it is so horrible and demeaning you could psychologically injure someone.” So what happens when those words are spoken? The hearer, being taught how damaged someone can feel, feels damaged. Surprise, surprise!

Exploiting a tragedy to pass legislation that will generate fees for Morgan & Morgan. Nice.

The secular religion is failing to prepare boys and girls to live and survive in the real world. It is also more costly and oppressive than America’s founding Christian religion. I think that a lot of people lack the necessary skill to properly judge a religion (i.e. moral philosophy). Many think that its justification (e.g. God) is its central feature and is grounds for summary dismissal.