Criticism of sheriff after charges dropped in FL cyberbullying case

Criticism of sheriff after charges dropped in FL cyberbullying case 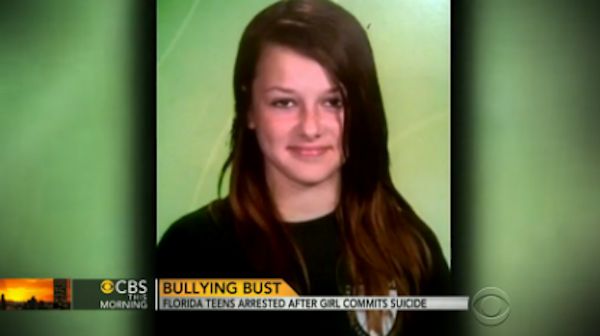 As a follow-up to yesterday’s post on the Florida bullying case of Rebecca Sedwick, the lawyers for both girls who had been charged with aggravated stalking have confirmed that charges have been dropped.

Prosecutors in Polk County, Fla., have dropped the charges against the two girls in a cyberbullying case that the police said led to the death of 12-year-old Rebecca Ann Sedwick, who jumped from a cement plant tower two months ago.

After weeks of investigation and an analysis of thousands of Facebook chats, the Polk County state attorney’s office on Wednesday dropped the charges of aggravated stalking against the girls, one 14 and one 12, their lawyers said.

“No, I do not feel I did anything wrong,” the younger of those two girls, now 13, told the TODAY show in an interview this morning.

The father of that teen says that his daughter never said any of the things alleged by the Polk County sheriff in the case.  He told the TODAY show, “It was uncalled for for Grady Judd to go up there and throw her picture up there and people coming to my house and trying to come and threaten my family, threaten me on the phone, threaten me at my house, I mean it was just crazy the way he did that. Then to put her with all the sayings that they were saying about ‘Drink bleach and die,’ Katie never said any of that stuff. None of the stuff that he put up on there [were things] she said.”

“They had a confrontation at school, they had a fight, and then it was over with,” the father said.

Baez told the TODAY Show, “the family is extremely disturbed and they want to look into any and every possible remedy at their disposal, so that’s something we’re going to of course look into for them. I think his conduct was reprehensible and I’m glad Katelyn has the opportunity to stand forward today and say, ‘I’m innocent.’”

In a press conference yesterday, Baez said that his client felt guilty about having been unkind to Sedwick – the two had previously been friends – and about having had a “schoolyard fight” with her nearly a year ago.  Sedwick had a troubled home life, according to the NY Times.  But Baez contended the dispute ended there and that there had been no evidence of his client having done anything criminal or anything that rose to the level of bullying.  He also said his client had gone through some problems of her own, including having been bullied.

Baez also repeatedly criticized the Polk County Sheriff for posting the faces of the then accused girls on national television and making the rounds on television to discuss details in the case.  “He [Sheriff Judd] should get a lawyer, and a darn good one, because he’s going to need it,” Baez warned.

Sheriff Grady Judd defended his actions in a separate press conference yesterday.  He said that regardless of the charges having been dropped, he was pleased with the outcome because the girls are now getting the help and services they need.

“But let me make one thing perfectly clear.  Criminal defense attorneys deny everything, admit nothing, and raise counter claims.  And I think you saw that,” Sheriff Judd said.  “But at the end of the day, you can be sure of one thing: that if bullying rises to the level of cyberstalking, if there’s a probable cause case, you can write this down, you can make sure it’s on tape, we’ll make future arrests. And that’s a guarantee.  Our goal was to create an intervention; our goal was to bring this conduct to the proper authorities in the proper manner to make sure it was dealt with.  And it was dealt with.  If we’d not made an arrest, if we’d not brought this to the court system, would these children be receiving services today?  And the answer is no.  We were successful, we’re pleased with that.”

She admitted to the schoolyard fight (and things happen).

Let her defend herself.

Let her sue, too, if the Sheriff can’t prove she did the things she was accused of. This led to her being bullied, which is wrong if there wasn’t anything like evidence of her guilt.

I have seen the immediate condemnation & distinct hopes & predictions for this girl ‘s miserable future on ‘ conservative ‘ websites. These extend to violence .

Adults including this Sherriff are just as bad as these kids. Anyone with some life experience can predict big troubles when 12 year olds start ‘dating’ & posting selfies . It is JUNGLE out there .

The lucky award goes to the 14 year old boy who got entangled in this & is away from public scrutiny . A relatives’ 14 year old cousin threw herself off the Cliffs of Dover after a boy decided he did not want to be a boyfriend. The boy was targeted in the big letter of disappointment left under her pillow. that was submitted at the Coronial inquiry & thus public knowledge in a small town . Pre internet but a shocking burden for the boy.

It is sad but this turmoil is exactly what suiciders like this want. She was even signing off as ‘the dead one’.

A circle of blame .

Actually it was not a relative of mine but a former boyfriend . Not surprisingly members of his family were later diagnosed with lithium deficiency.

I think we might want to look at the suiciders family .

Not just for a possible medical problems, but for their own behavior which may have contributed to her suicide.

Yes, I’m not saying the family is responsible, but that would be the way it usually goes.

As one of the largest and best-run studies in medicine, the ACEs study, shows; suicide rates (and pretty much every other negative life outcome you could imagine: physical, psychological, criminal, addictive) rise as Adverse Childhood Experiences increase.

The purpose of arresting children these days is… to get them “services”? How touchy-feely therapeutically jurisprudential.

It’s time for a new sheriff in Polk County.

I didn’t realize that the point of a criminal prosecution was to “create an intervention.”

If what the two young girls required was an intervention, a counselor and psychologist working with the parents was required, not a sheriff, a booking, and defense lawyers.

I shall now pray I am not ever arrested for anything in that county.

Without wanting to hog this thread there has been an almost identical,case in Britain . The public culprit here was ask.fm . The 12 year old victim with a very similar Gloria Swanson side hair sweep & pouty selfies posted questions to herself & obviously did not like her answers!

Freud had an idea about hysteria amongst females . Might be worth revisiting .

Unfortunately, Polk County Sheriff Grady Judd never met a TV camera he did not like. Polk County voters obviously like the morality plays that he creates.