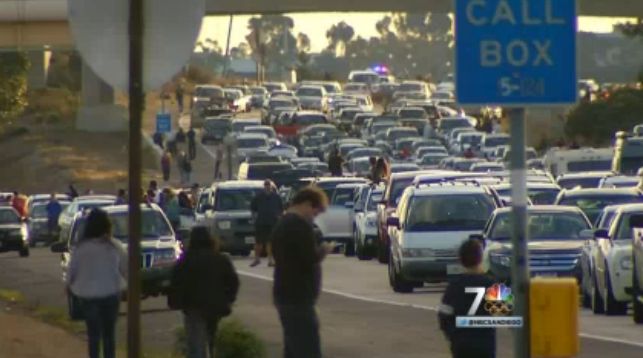 A busy San Diego highway was shut down and snarled traffic for Thanksgiving day travelers Thursday after a brother decided to play a joke on his sister by calling to tell her there was a bomb in her car.

A prank phone call between a brother and sister involving a bomb hoax led officials to block traffic in both directions on San Diego’s busy Interstate 15 on Thanksgiving afternoon.

The freeway shutdown began around 2:45 p.m. at northbound and southbound I-15 near Miramar Way.

Lt. Lorenzo Ruano with the California Highway Patrol said a woman was driving on the freeway with a friend when she received a phone call from an unknown person, whose voice she did not recognize. The person on the other end told the woman there was a bomb in her car.

Lt. Ruano said the woman immediately pulled over by the center divide on northbound I-15, just south of the Miramar Way overpass, and called 911.

You can pretty much guess at least some of what happened next.

Officials with the California Highway Patrol shut down the highway and a bomb squad was called to the scene, all of that snarling traffic for a couple of hours on Thanksgiving day.

Authorities questioned the woman as they investigated, but things took a turn when she got another phone call while authorities were there.  That call was from her brother, who was calling to apologize for the “joke.”

CHP officials said the woman started crying and seemed genuinely surprised that the earlier unknown caller had actually been her brother, so they were inclined to believe her, according to NBC San Diego.

Though the brother was reportedly apologetic when he came to the scene for questioning, he was promptly arrested. His fate apparently rests with the City Attorney or District Attorney, reports NBC San Diego.

The remainder of the holiday season this year should be interesting for these siblings.

The brother should have the following punishment:

1) He shall be locked in a car

2) The car shall have a bomb inside

3) The bomb has the potential to be defused

4) There is a red wire and a green wire

5) The brother shall have a pair of wire cutters

If you listen closely, you can hear Schrodinger’s Cat laughing hysterically.

[…] I: Check out the VIDEO at Legal Insurrection at the 0:17 mark where the fool girl thinks that “this is hysterical”. Wow really? I […]

I drove by this mess on my way home at about 5:45 pm. There was a traffic jam leading off to Miramar road, and a truck with blinking lights. Either this was still going on, or there was a secondary accident.

Assuming there was not added damage by way of an auto accident, I would require the jerk to send a handwritten note of apology to EVERY DRIVER STUCK IN THAT TRAFFIC!

Written with an old style quill pen dipped in his own blood and written in cursive.

This is good, except no one knows who they are.

I’d put the guy on top of one of those water dunking tanks, you know, the ones where if you hit the bullseye, the trap door falls and the fellow goes in the water.

And by television advertisements, invite everyone in the jam that day, to come by and just pull the lever and GUARANTEE the guy goes in the water!

The guy should be caned.
http://en.wikipedia.org/wiki/Caning