Is there even an Iran Nuke Deal?

Is there even an Iran Nuke Deal? 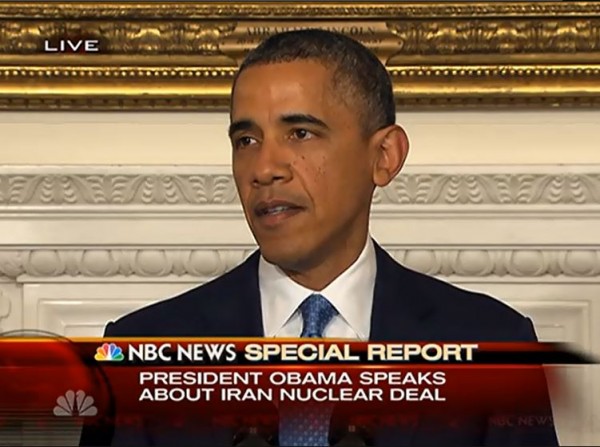 Now comes word that the “deal” is not actually final, that there are details to be worked out, and that there is a window before the agreement comes into effect.

Iran is currently enjoying a “window” of time before the six-month deal signed in Geneva early Sunday goes into effect, during which it is not bound to take any credible steps toward disabling its ability to produce a nuclear weapon, the State Department acknowledged Tuesday.

State Department spokeswoman Jen Psaki said that the six-month interim period, during which Iran would take steps to rein in its nuclear program in exchange for sanctions relief, has not yet begun. Furthermore, there are still a number of details to be worked out, she said, without specifying what points had yet to be finalized.

Her comments created confusion as to whether the much-touted interim deal, supposedly reached by P5+1 powers and Iran in Geneva in the early hours of Sunday morning, had actually been completed as claimed. Iran on Tuesday accused the US of publishing an inaccurate account of what had been agreed. And its Foreign Minister Mohammad Javad Zarif said in an address to the Iranian parliament Wednesday that Iran would continue construction on the Arak heavy water plant, in an apparent breach of the ostensibly agreed terms.

“The next step here is a continuation of technical discussions at a working level so that we can essentially tee up the implementation of the agreement,” Psaki told reporters Tuesday. “Obviously, once that’s — those technical discussions are worked through, I guess the clock would start. Obviously, there’ll also be a reconvening of the political track with the P5+1, which Under Secretary Sherman will continue to be our lead negotiator on.”

Psaki said that she did not “have a specific timeline” for how long the window would be in place before the six-month period began, nor did there seem to be any mechanism in place to prevent Iran from stepping up nuclear production before the scale-down went into effect.

This whole Iran nuke deal is turning into another Obama debacle.

Obama had his public statement, got whatever help in the polls that will create, and then leaves behind a mess.

In regards to nuclear issue, I promise our people that first lock has been opened. We have shook the foundations of the sanctions regime.

Many have tried to isolate #Iran. But in effect, our enemies are the ones who are isolated today.

They have to sign the deal before they figure out what’s in the deal.

In the legal profession, we have a term for this kind of agreement…

Classic. What does he care? He got his press conference and media high-fiving. Does anybody in the media even do follow-ups anymore? No. This guy is unbelievable.

obama pillages America, daily, and America is consistently silent in response. It is not only obama who is unbelievable.

The Iranians better straighten up before Obama plays the Race Card! I can just see him in front of the World Press Corp stating that the reason the Iranian aren’t bargaining in good faith is because…

“You know, he doesn’t look like all of those other presidents on those dollar bills.”

….Or maybe he is just lying to us about the contents of the deal, to blunt the criticism at home…

He’s done it, before.

Actually, I think that this time he got what he wanted: unfettered nuclear Iran. He just lied to us because that’s what he does.

Actually, Obama is not that bright, and neither is Kerry nor anyone else in his inner circle. They are grossly incompetent, dull-witted, and lazy. Our country is not well-served by sending children to negotiate with adults.

He’s not bright. He’s more on the dumb side of human kind due to his narcissism.

He got played.
His only worry right now is his legacy. He wants to go down in history as a big player, but he is now 5 years into the job and has accomplished nada. Obamacare is a stinky pile of dung.
Now his Majesty is on full gambling mode. He played a card (no pun intended) with the iranians, hoping to accomplishe “peace in the Middle East.” He got played.
That happens when you trust your enemies over your allies.
He’s the King all right. Like Midas, everything he touches turns into…feces.

you mean the Queen?

There’s more than one way to skin this cat!

There’s also been a rise in deaths to nuclear scientists in India, where Pakistan and China are considered the culprits because they want to keep India from improving its nukes.

If I had to guess, Kerry saw a Nobel Peace Prize as something he would get. Is that still likely?

Kerry wants another shot at the presidency. And, Kerry is Obama’s friend. Cultivated from the day Obama walked into the senate. And, Kerry saw his meal ticket.

So, if I understand this correctly, the US, under Obama’s omniscient leadership, has released many billions of dollars that was being held as a negotiating chip and putting pressure on Iran and we got nothing, nada, zilch in return. Only in Mr. Obama’s world and the MSM definition of “Deal” does a great deal start with one side giving huge amounts and the other side gives nothing.
>
It makes me wonder whether governing using criminal stupidity or obscene ignorance is considered a violation of the constitution and one’s oath of office. What is even more amazing is how almost 40% American people continue to view Obama as being successful. Perhaps this is the ultimate indication of racism. The latest Reuter’s poll shows that only 30% of white people approve of Mr. Obama’s leadership, but over 80% of black America does so. Considering that Obama has all but destroyed everything he touches and that the unemployment rate for black male adults is around 28%, one can only conclude that the black population is evaluating Mr. Obama’s performance based on the color of his skin and not the content of his character. Isn’t that the definition of racism? Or perhaps it is the definition of a cult and Mr. Obama is the cult leader.
>
It makes one wonder if Obama agreeing to the Iranian “deal” occurred almost exactly to the day that the people drank the cyanide laced Kool-Aid In Jonestown is something more than mere coincidence.

We have a very, very sick man in the White House. And that’s just Michelle Obama.

It is surreal that a contrivance known as ‘Barack Hussein Obama’ is president of the United States. It’s too terrible to face. How this fraud was perpetrated for more than five minutes is absolutely amazing, let alone five years.

Sure, people are waking up. But another 3 years of this insanity?…

How do we know Obama’s lying? He’s breathing.

….or his cheeks are flapping….all four!