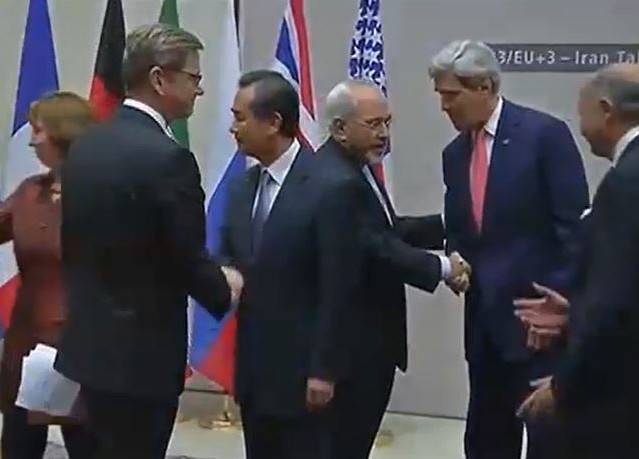 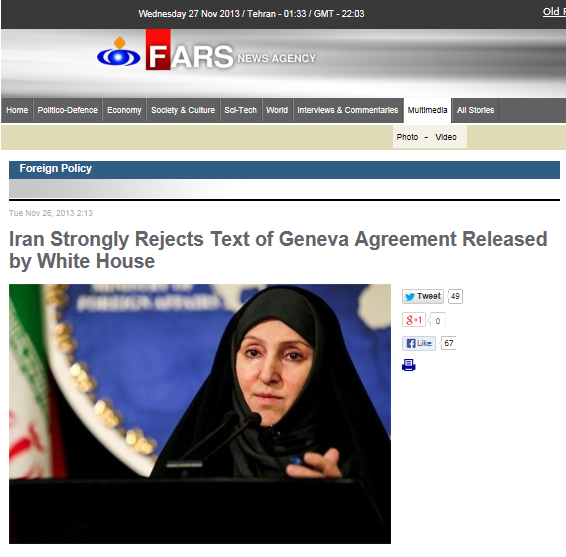 TEHRAN (FNA)- The Iranian Foreign Ministry on Tuesday called invalid a press release by the White House alleged to be the text of the nuclear agreement struck by Iran and the Group 5+1 (the US, Russia, China, Britain and France plus Germany) in Geneva on Sunday.

“What has been released by the website of the White House as a fact sheet is a one-sided interpretation of the agreed text in Geneva and some of the explanations and words in the sheet contradict the text of the Joint Plan of Action (the title of the Iran-powers deal), and this fact sheet has unfortunately been translated and released in the name of the Geneva agreement by certain media, which is not true,” Foreign Ministry Spokeswoman Marziyeh Afkham said on Tuesday.

She said that the four-page text under the name of the Joint Plan of Action (which has been released by the Iranian foreign ministry) was the result of the agreement reached during the Geneva talks and all of its sentences and words were chosen based on the considerations of all parties to the talks. In fact one of the reasons why negotiations between Iran and the G5+1 took so long pertained to the accuracy which was needed for choosing the words for the text of the agreement, Afkham said, explaining that the Iranian delegation was much rigid and laid much emphasis on the need for this accuracy….

According to Iran Pulse at AL-Monitor, the disagreement relates to whether the agreement recognizes Iran’s “right” to enrich uranium: 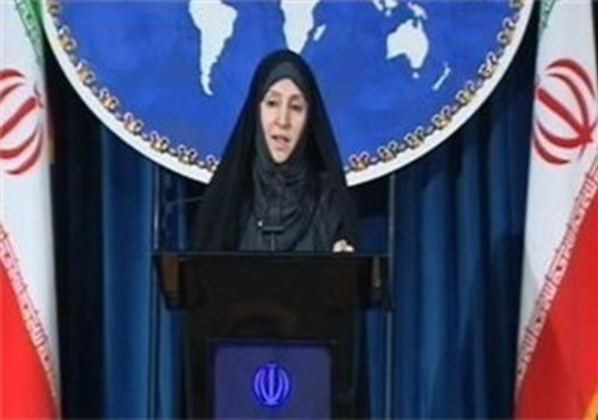 Marzieh Afkham, spokesperson for Iran’s Foreign Ministry, has disputed what was published on the White House website outlining the specifics of the nuclear deal between Iran and the five permanent members of the UN Security Council plus Germany (P5+1)….

Afkham did not go into the specifics of what aspects of the document were inconsistent with Iran’s understanding of the agreement. In the Iranian media, there seems to be confusion over Iran’s right to enrichment. Iran’s foreign minister and top nuclear negotiator Mohammad Javad Zarif said that Iran’s right to enrich had been officially recognized. However, US Secretary of State John Kerry told ABC’s “This Week,” that “We do not recognized the right to enrich,” and British Foreign Secretary William Hague told the BBC that the phrase “right to enrich” is “not in the document.”

From the Iranian statement it’s hard to tell exactly what the problem is, and whether one side has sold the agreement to its respective public as something it is not.

I suspect we’ll be hearing more about this in the coming hours.

Or do I go with the crazies in Iran who think lying to infidels is a virtue?

Do I get another choice…???

I have to go with believing the Iranians, because they know obama is a muslim and therefore they would not lie to him.

Obama is playing that popular Muslim game with us: what’s said in one language is not the same as said in another.

Since the Iranians desperately want to nuke Israel, they don’t want any misinterpretations of the text that might possibly perhaps deny them that pleasure.

It’s not surprising that the Iranians would brand the President of the United States a liar. It is a shock when they give specific examples.

What a world Obama has given us. Iran and Russia can now be more relied on to tell the truth than America.

Isn’t it sad? If we didn’t know that 0bama is a pathological liar, we would be outraged by Iran. If they said it about a Bush administration deal, it would be dismissed as their normal insanity. But as it is, I tend to believe them.

This administration doesn’t ever bother with the truth unless it suits their purposes. And it rarely does.

obama and his crew have an instinctive distrust of the truth.

Or at least a certain Americam

Hahahahahaha. On the Holy List of Honesty, Obama is below Putin, below Iran, below Assad, below Norkia, below Pinocchio, below the Wicked Witch, and putting a major scare into MSNBC. Hahahahaha.

Just received an update to Dinesh D’Souza film of 2012 “Obama’s America 2016”. You might find D’Souza’s update more relevant in light of what has happened over the past 18 months; esp. this past week. A prior prediction and a forward look based on Obama’s desire for not only redistribution of American Wealth and power, but Global Wealth and power. What we find in ineptitude and incompetence may be the public mask he wears to cover a deviant calculated hope and change of a master plan he wrote for himself while at Columbia (?) and his Biography “Dreams of My Father” alluded to be penned by Bill Ayers.No longer can we say “Not Possible” when we continue to allow him, with out challenge, to use executive authorization to take powers never intended both nationally and internationally.

The unwillingness and incapacity of the Republican house to challenge obama successfully in court is disturbing. We hear a lot about the latest and greatest house “investigation,” but the house just gets stiffed and lied to by the administration, and nothing happens. We are, as you point out, at great risk here.

Darrell Issa is a waste of time. He’s a champion paper rustler, and nothing ever comes of his investigations no matter how much evidence he gets. I think Issa’s games (is he Muslim or Christian, by the way?) are intended to keep the GOP faithful fat, dumb, and happy. Every thing that happens, Issa immediately says “investigation”. Nobody ever hears of any results or consequences arising from such.

“Issa, the second of six children, was born in Cleveland, Ohio to Martha (née Bielfelt) and William Issa, who sold trucks and grinded valves.[8][9] His father was Eastern Orthodox and his mother was a Mormon.[10] His paternal grandparents were Lebanese immigrants who both belonged to the Greek Orthodox Church of Antioch, also known as “Antiochian Orthodox”,[11] and his mother is of German and Bohemian (Czech) descent.[12][13][14] The family moved to the predominantly Jewish suburb of Cleveland Heights in the later years of his childhood. Many of his friends were Jewish, and Issa reportedly worked for a rabbi at one point. He became very familiar with Jewish culture.” (Wee-kee)

Issa is Aramaic and/or Hebrew for Jesus.

This is good to know.Thanks.

David, it’s not Hebrew. That would be Yehoshua/Joshua. Not sure it’s Aramaic either, but won’t put my head on a block saying it’s not since I’ve lost whatever little Aramaic I used to have and no time now to look it up. It’s likely Arabic. I thought he was Lebanese.It’s comforting to know that he has that familiarity with Jewish culture. But why is he not producing results for us?

Quite right. It’s “sound and fury signifying nothing.” This may be the bigger issue than Obama (who really is a dull dog, a functionary on behalf of a certain pernicious but common academic anti-Americanism that’s been around for generations. What makes Obama unique or different is his ability to dissemble his true representations). But the Right’s failure is more profound; it suggests that no matter who or what wishes to subvert America, the Right is incapable and unwilling to challenge the cultural monolith behind it. Obama could have been defeated in 2008 by a dedicated and tough McCain campaign. Romney could have defeated him too. But, in essence, they refused to do it. They weren’t willing to cross certain lines that risked their cultural rank, as they saw it. Obama has crossed every line ever drawn in the political-social compact of American governance; the Republicans don’t dare cross their own self-imposed line. That is the bigger story. Obama is just doing, at last, what every anti-American transformational political dreamer has wanted to do for 50 years. The Republicans didn’t see him coming, didn’t want to see him coming, refuse to recognize who he is now that he’s here, so of course cannot act in real opposition, only play-act. Issa must have five open investigations going on. None will ever reach a point of decision and action. It’s not possible, or rather beyond the political psychological limits of the GOP.

The big story is not the threat to America by Obama (easy to diagnose, predict, understand) but that the Republicans can’t come close to meeting this threat on its own audacious terms, or on any terms really. Whatever happens to Obama or the country, the outcome or story will not be influenced by GOP action and character; their role is essentially nugatory. They are just observers.

I mostly agree with you here but think your assumption that Romney and McCain are men of the Right is wrong. They are both Leftists, RINO’s.

The little emperor caught once again with his pants down…

Ruh-roh – Saudis say they were lied to also:

In what languages was the draft agreement written?

Which is considered authoritative by both sides?

I have the funny feeling that the Iranians will insist that their language version is authoritative, not the English one, and that their version permits them to continue to enrich uranium.

I also have the funny feeling that Champ will fold like a cheap lawn chair on this one.

“In what languages was the draft agreement written?”

I’m almost positive that it’s written in Ferengi. I’m quite sure Ferengi has words that mean whatever you want them to.

If only Obama were from Ferenginard we wouldn’t be in an economic mess. Say what you want about the corrupt little cheating Ferengi bastards, they were fervent capitalists with a healthy respect for the profit motive.

Laugh of the day!

If Obama is caught in a lie on this, foreign media will not be as kind to him as our bootlickiing media will be.

Mere days old, and it is in the toilet. Here is the last line, a footnote covering the entire agreement document, making moot whether in Farsi, English, French, Urdu or flipping Bantu:

* “With respect to the final step and any steps in between, the standard principle that ‘nothing is agreed until everything is agreed’ applies.”

Catch-22. It is not a “treaty” and not binding on anyone who doesn’t feel bound by it. Good luck with that.

ROFLMAO! What a flippin’ man of no parts we have for a POTUS. Everything is a lie with him; even a binding agreement is non-binding.Truth really is stranger than fiction cuz no one can imagine the USA ever electing a (fill in your own word here) like Barack Hussein Obama.

Something’s really wrong and messed up when even the Iranians can call out your lies.

Someone had the trick card & it ain’t in the first lot of losers.

Sending out a female to make this announcement is an insult to the Iran’s interlocutors.

I’ll leave it to y’all lawyers to say whether it explicitly or implicitly recognizes a right to enrich for Iran.

Israel has to pull this neat trick off: destroy the Iranian nuclear industry without having their Saudi/Sunni allies turn on them once the Iranian/Shiite threat is gone.

Commentary on the predictions made in 2012 on Obama’s intentions for the Middle East.

I have not been able to find one major media outlet, TV or print that is talking about this story. However, everyone is reporting that Zimmerman had five weapons and a hundred rounds of ammunition in his house. Priorities.

Who knew the Foreign Ministry has hired a Bene Gesserit for a spokeswoman. Kinda’ goes with the Iranian landscape.

The devils are in the details.

[…] as some other, seemingly, minor concessions yet to be clarified by the Treasury Department. Even Iran seems confused about what it agreed […]