Nary a word about why the mad Mullahs are a threat

Nary a word about why the mad Mullahs are a threat

Mideast Media Sampler 11/11/2013 – Media focuses on politics of Geneva negotiations, not why the Mullah regime is a threat. 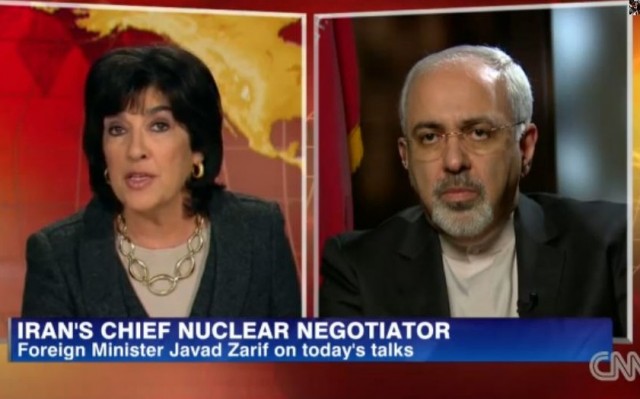 Over the past few days the reporting from Geneva changed from anticipation of an imminent deal to a final “no deal.” Or “no deal” for now.

The New York Times reported Talks With Iran Fail to Produce a Nuclear Agreement. As almost all reporting on the P5+1 talks with Iran go it gives the credit to (or places the blame on) France for the failure of the two sides to reach an agreement.

The proposal under consideration in Geneva was to have been the first stage of a multipart agreement. It called for Iran to freeze its nuclear program for up to six months to allow negotiations on a long-term agreement without the worry that Iran was racing ahead to build a bomb. In exchange, the West was to have provided some easing of the international sanctions that have battered Iran’s economy.

After years of off-again, on-again talks, the deal would have been the first to brake Iran’s nuclear program.Despite the diplomats’ insistence on progress, the failure to clinch an agreement raised questions about the future of the nuclear talks, given the fierce criticism that the mere prospect of a deal whipped up in Israel and among Republicans and some Democrats in Congress.

Unfortunately, this frames the scuttling of the talks in terms of those looking for a compromise versus pro-Israel ideologues. Subsequent reporting in the article is more specific about some, but not all, of the real issues involved.

The Arak reactor has been a contentious negotiating point because it would give Iran another pathway to a bomb, using plutonium rather than enriched uranium. Moreover, the Iranian explanations for why it is building Arak have left most Western nations and nuclear experts skeptical. The country has no need for the fuel for civilian uses now, and the reactor’s design renders it highly efficient for producing the makings of a nuclear weapon.

Iran, which has always contended its nuclear program was for peaceful purposes only, insists that the heavy-water reactor is just another path toward the same goal of energy production.

While enriched uranium is one fuel that can be used for a nuclear explosive, so too is plutonium. Specifically, the PU-239 isotope of plutonium is considered “weapons grade.” The Nuclear Regulatory Commission informs us:

Plutonium-239 is created in a reactor that is specially designed and operated to produce Pu-239 from uranium.

If the Arak reactor was built for peaceful purposes, it would not have been designed to produce PU-239. So, yes, the reporting is essentially accurate, but the skepticism should be universal not qualified with “most Western nations and nuclear experts.” Furthermore, the construction of the Arak reactor proves that Iran’s nuclear program is not for “peaceful purposes only” and the Iranian claim should be presented not as something debatable, but as false in the face of observable evidence.

In terms of the deal being discussed, Iran “…refrain from operating or fueling the facility during the six months the interim accord might last.” But if the reactor is not to be operational for a year, how is not operating it any sort of a concession? (Because the Arak reaction would produce plutonium, once it is operational, it could not be destroyed without severe environmental consequences.) This is a concession on paper only. Regarding Arak, the only term that should satisfy P5+1 is its destruction.

But here’s the problem:

The proposal under consideration in Geneva was to have been the first stage of a multipart agreement. It called for Iran to freeze its nuclear program for up to six months to allow negotiations on a long-term agreement without the worry that Iran was racing ahead to build a bomb. In exchange, the West was to have provided some easing of the international sanctions that have battered Iran’s economy.

This works well for Iran. Iran doesn’t want to roll back any part of its nuclear program. So any deal that “freezes” its gains in place is a victory for Iran. If Iran gets some lessening of sanctions for putting things on hold that’s gravy.

The Washington Post reported that the freezing of the building of the Arak reactor would be a step towards dismantling it in a permanent agreement. But if the reactor is to be destroyed, why leave it intact for now? Is it too much to ask Iran to make a concrete confidence building measure for the P5+1?

The New York Times also reported on an important difference in the way sanctions are viewed by the United States on one side and the EU (as represented by Britain, France and Germany) on the other:

French officials also noted a difference between the United States and Europe on the issue of sanctions relief. The most sweeping American sanctions on Iran’s oil and banking industries were passed by Congress, giving President Obama little flexibility to lift them.

That has led the Obama administration to focus on a narrower set of proposals involving Iranian cash that is frozen in overseas banks. Freeing that cash in installments, in return for specific steps by Iran, would not require the repeal of any congressional sanctions.

France and other European Union countries, however, face fewer political restrictions on ending their core sanctions, which means any decision to lift them could be more far-reaching. In addition, officials said, the measures would be harder to reinstate should the talks unravel or Iran renege on its pledges.

This is important information. It’s been reported that the administration does plan to unfreeze Iranian assets as a way of circumventing sanctions. The United State views unfreezing assets as a substitute for easing sanctions; but Europe has no such leeway. European sanctions, once ease, would be difficult to re-impose.

In the cases of both the Washington Post and New York Times the reporting focused more on the politics of the negotiations than on the actual details. Judgments about Iran were generally suspended, with both papers choosing to cast the conflict as between those interested in an agreement and those opposed to the agreement. That Iran is responsible for much of the carnage is Syria was absent from any reporting. Nor was there any mention of Iran’s involvement in fomenting terror around the world.

Overall, despite the unfortunate emphasis on politics over substance, the New York Times covered this weekend’s summit better. The Washington Post’s coverage was marred by a quote towards the end.

There is plenty of documentation that the NIAC (and Parsi specifically) has ties to Iran. Using the group’s self-description as a “grass-roots organization,” is irresponsible. It is hardly a disinterested party.

In other words instead of framing the negotiations as being about the West trying to rein in a rogue regime, the focus of reporting put the onus on those opposed to the deal.

What? You mean Obama quietly lifted sanctions and the Iranians STILL don’t make a deal?

Gee…. it’s almost like Iran never had any intention of making a deal and just wanted concessions from the US.

Seriously, how stupid are the people in this administration?

Two reasons that the “mad mullahs” are mad.

#1) They’re plain crazy. I’d go so far as to say Batshyte crazy, but I’ll be civil and merely call them bat guano crazy.

#2) If the American people are mad at their own government for a myriad of reasons, how can we expect foreign governments NOT to be mad at us as well? Isreal is pretty steamed at the moment for good reason (Giving away military operations), so our Enemies must be mad at us for some “awful” reason as well, right? /sarc.

At least they can get some satisfaction that the American people can’t get by snubbing their noses at this administration.