How long before Kay Hagan claims she was brainwashed into supporting Obamacare?

How long before Kay Hagan claims she was brainwashed into supporting Obamacare? 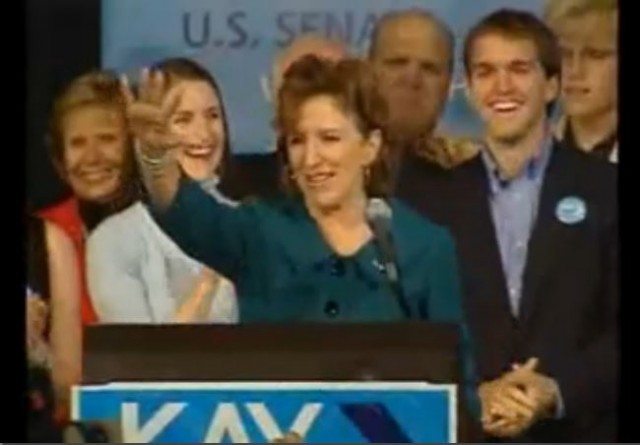 Kay Hagan (D-NC) was flying high in polling prior to the Obamacare debacle being exposed.

Now she’s pretty much tied with any of a number of potential Republican challengers for 2014.

The general election Republican TV blitz should not reqire much work. Just cut this video down to 30 seconds, and run it, run it, run it. Day and night. 24/7. No break even for holidays.

A Democratic SuperPAC is coming to her aid. Good luck with that.

Full probe? What didn’t you understand about all the warnings?

Hagan’s only hope may be to claim she was brainwashed by the Obamacare team. It’s, umm, worked before.

There is a Tea Party GOP candidate, Dr. Greg Brannon, who is already leading Hagan in the polls, albeit by a point or two. Sensing blood in the water, the GOP establishment is swooping in to help. They are sending in Karl Rove to do three campaign fundraisers… but not for Brannon, the TP candidate in the lead. No, they are supporting Thom Tillis, Speaker of the NC state house, who trails Hagan in the polls.

Tillis is a garden variety GOP establishment guy, in the NC House since 2006 after a career in business with IBM and PriceWaterhouse, now drafted by the nat’l GOP to oppose Brannon more than Hagan. Electability, you know, like Romney and McCain.

Brannon is endorsed by Rand Paul and Erick Erickson (Red State), among others, so far.

“Greg’s story is not unlike the miracle so many in our great nation have experienced through hard work and God’s providence. Born in a working class neighborhood in South Central Los Angeles, Greg and his brother were raised by a single mom who set an example of hard work and determination.

In a tribute to this example, Greg was the first member in his family to go to college, earning a scholarship to the University of Southern California, where he received his Bachelor of Science Degree in Biological Science in 1982; his Medical Degree from the Chicago Medical School in 1988; his OB/GYN Residency was performed at Los Angeles County/ USC Women’s Hospital in 1992; and he was a Clinical Professor at UNC/Wake AHEC from 1993-1994 before opening his OBGYN practice in Cary, NC in 1993.

Greg and his wife, Jody, have been married for 25 years and have 7 children.

As a Christian, Father and devoted husband, Greg is involved in coaching his children’s athletic teams, was a Charter Family and Board member of Cary Christian School, is a leader in men’s Bible Study for over 14 years, and has traveled the globe on Christian and medical missions in Africa and Central America.

With a patient network of more than 20,000 built over 20 years on compassion and trust, Dr. Greg Brannon is one of North Carolina’s leading voices on health care. He’s experienced firsthand a healthcare system in disarray.

Strongly committed to the sanctity of life, Greg is a Board Member of Hand of Hope, a pregnancy support group in Fuquay-Varina, NC, and is a member of AAPLOG, an organization of pro-life OBGYN doctors.

Having built his medical practice from the ground up, Greg embodies America’s entrepreneurial spirit.”

Thanks for that info.

I had suspected that the GOP was backstabbing TP candidates. Or making sure that a non-viable candidate ran / co-opted the TP nomination ( i.e. Rick Perry ).

This is the GOP making sure the TP candidate has the conservative support split / diminished , and ensuring a Liberal / Progressive is re-elected.

Its past time for the GOP to ‘go away / disappear’.

An endorsement from Erickson is not something which should be publicized if a candidate wishes respect and support.

Sent Greg Brannon some money and got his sticker on my pickup!

I have been waiting for 6 years to vote against Hagan. I knew she was a liar when she ran and won on Obama’s coattails. Now she may lose on those same coattails.

She lied because they all were lying.

Bashir spouted unspeakable words because his compatriots have been doing it. Etc.

The psychotic euphoria of hoards of otherwise intelligent people about and around Obama since his first presidential campaign is a lesson in the escalating dangers of mob think.

We’ve seen it in other countries where tyrants whipped up the people into worshipful frenzies. We see it where gangs commit crimes that individually no member would do. Moral compasses go into the trash heap and bad things can and do happen.

Hagen was probably far more vulnerable than the early polls indicated because she really has been following in the footsteps of Elizabeth Dole in being mostly vacuous talk and not much performance. A lot of the pre Obamacare roll out support for Hagen in the polls was because of name recognition and because Hagen is such a nonentity it was actually hard for people to work up the energy to actively dislike her. Now with so many people in NC losing insurance, it has become much easier to dislike her and she is in deep, deep trouble.

Kay hagan is a name I am going to put on forms when asked to fill in a survey at the mall.

It is totally nowhere. Thanks NC.

About the only person more purposely obscure in office is… Richard Burr.

Jesse wasn’t always effective but at least you knew he was there.

Leave it to the GO Pee Pee to blow this.

Anyone considering voting for the GOP candidate should have their head examined, because there is a viable Tea Party candidate that won’t stab them in the back once they get to Washington.

i would just add one thing, at the end show Gillibrand saying, of course we all knew (or whatever the exact words were). Love coming here, yes it’s conservative but honest, not a full of hyperbole as so many others are.

Besides the “If you like your insurance, you can keep it” litany, she has bragged about being on the committee which wrote the bill which became the ACA. I hope someone has a screen shot of that claim on her website.

I am more likely to vote for Brannon than for Harris, the Baptist pastor from Charlotte who has thrown his hat in the ring. But, even though Rove is supporting him, I’m not unalterably opposed to Tillis. I have seen him in person and he is far more personable and knowledgeable than Hagan. If Tillis wins the primary I hope NC conservatives would not be stupid enough to sit on their hands and allow the re-election of Hagan.

Has she made any statement lately about her lies?