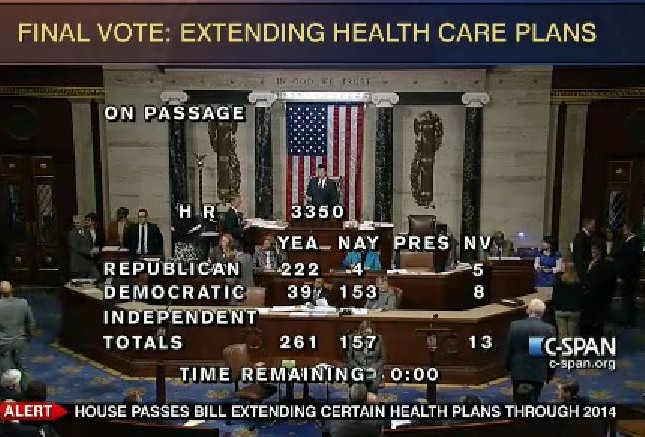 Dem Rep. Jim McDermott ahead of vote on Upton bill: "I haven't seen so much panic on this floor since 9/11."

Having 39 Dems vote for a bill that Dems believe will undermine OCare is an AMAZING talking point for Repubs,. BRUTAL.

You can watch live on CSPAN.

Vote taking place now on the Keep Your Health Plan Act, which Obama has said he will veto.

I’ve watched the debate, and it looks like Obama’s phony and unworkable “fix” likely will keep Democrats in line, which was its intended purpose.

It did not take long for Obama’s proposal as detailed in Obama Changes His Mind (But Only For a Year); You Can Keep Your Plan IF Insurers Reinstate Them to blow sky high.

Two hours, to be precise.”

JackRussellTerrierist in reply to Not A Member of Any Organized Political. | November 15, 2013 at 1:18 pm

Shocking that somebody in that rat-run state is saying no to obastard and his silly antics.

You’d think a “political genius” like Obama (who’s smarter than his political director, knows more about policy than his policy advisers, is a better speech writer than his speech writers, etc.), would have known that state insurance commissioners are often elected officials who rely upon campaign contributions from insurance companies that don’t like being scapegoated by arrogant, narcissistic fools who think they know a lot more than they actually do.

Captain my Captain Obama wants to veto it. Fine, do so.

They are voting to unscramble his omlette.

Once again the Doomocrats want to put your money where their mouth is.

Not A Member of Any Organized Political in reply to JackRussellTerrierist. | November 15, 2013 at 1:09 pm

Or their mouth where your money is.

If there is a political reason to extend these insurance plan now, what makes anybody think that there won’t be an even bigger reason to extend them on Oct 1, 2014, a mere 5 weeks before the mid-term elections, when not only will individuals be required to get new insurance, but so will employers ?

This is pure-and-simple “kicking-the-can” down the road to an even worse time, politically.

And then after 2014, the 2016 prez election cycle starts. If obastard doesn’t get obastardcare rolling now, he’s not ever going to, unless he tells the entire ‘rat party “tough shit”.

Exactamundo. Add in interstate competition, attach plans to the employee, not the employer and ObamaCare is done. Toast.
Won’t matter if it’s still a ‘law’. No one will have to use it and most insurance carriers will go back to the freer market. Democrats won’t DARE try to sunset the Upton Amendment, especially right before an election. (All of the above suggestions are already in amendments the GOP has presented and Reid refuses to bring up to a vote in the Senate. A job for Senators Cruz and Lee: demand they be brought up for votes now.)
btw, Rubio has a great bill to kill the ‘risk corridor’ that basically pays insurance companies for any risk/adverse consequences with tax payer dollars. That would take care of any insurers thinking ObamaCare would bail them out on the tax payers’ dime.

Insured persons who are undergoing treatment are already protected against losing their insurance by a law passed by Congress in 1996, but few people apparently know this. Health insurers are violating the Health Insurance Portability and Accountability Act (Public Law 104-191) when they claim they are forced to terminate insurance for patients already undergoing treatment due to regulations posted by HHS in the Federal Register in June 2010, three months after Obamacare was signed into law. A posting in the Federal Register that has not been passed by Congress does not trump existing Federal law.

So says C. Steven Tucker, a health and life insurance broker licensed in 15 states who is considered to be a “subject matter expert” in the public policy arena of health insurance reform. To put that in terms familiar to LI readers, Tucker is to health insurance reform as Branco is to self-defense law. Tucker explains this violation of the law on his blog at the following link:
http://csteventucker.wordpress.com/2013/11/13/the-truth-about-preexisting-conditions/

By using his knowledge of this law, Mr. Tucker was able to get insurance coverage quickly restored for a cancer patient who was intereviewed on Fox by Megyn Kelly last Nov 7. He explains this case, which is applicable to every insured person undergoing treatment, and includes a reprinting of the relevant text of Public Law 104-191 in his post (section 2742: Guaranteed Renewability of Individual Health Insurance Coverage). Any insured person undergoing treatment can follow Mr. Tucker’s advice to get a cancelled policy reinstated in accordance with the law. That includes all of those cancer patients whose shocking stories have been told over the past few weeks.

In addition, Mr. Tucker’s post includes further evidence against our lying president. Obama has often charged that “health insurance companies can raise your premiums when you get sick” and “health insurance companies can cancel your coverage when you get sick.” Mr. Tucker explains that Public Law 104-191 has prohibited such actions by any insurer since 1997, more than 17 years ago.

So, regardless of the future of Upton’s “Keep Your Health Plan,” Landrieu’s “Keeping the Affordable Care Act Promise Act,” or even The King’s Fix, the most vulnerable patients are already protected against losing their current insurance plans – spread the word.

I highly recommend http://csteventucker.wordpress.com as required reading for anyone who seeks a better understanding of health insurance reform as it exists today, especially in light of the constant stream of quixotic changes that politicians and regulators cannot resist making.

Minor correction, Branco is our subject matter expert on satirical political cartoons, Branca is our self defense guru. 🙂

Aaagh! My apologies to Andrew BrancA.

Thanks for this info. I’m on an attorney email list, and just cut and pasted your post and sent it on.

I’ve had to deal with HIPAA marginally over the years, but wasn’t aware it provided for this.

Thank you, Karen. Your efforts may well help patients who have illegally lost their insurance to return to the care of doctors who were treating them. I am grateful to Mr. Tucker for explaining this legal protection, and I hope his advice will be spread across the Internet to the fullest extent possible.

You are absolutely correct/ Even if you lose your job; they must pay for treatment which has already begun.

The bill passed. The Republicans are walking into a trap with eyes wide open.

the Stupid Party. As someone pointed out on another thread this is the Upton who helped the Dems make light bulbs illegal unless they contained poisonous mercury.

Still, maybe the Pres will raise it a notch by veto-ing the bill. We can always hope.

Obama has already promised to veto it, but he’ll probably never have to do it, since his henchman Harry Reid likely won’t ever let it come up for a vote in the Senate.

I’m not crazy about the Upton bill if it gets signed into law. But if Obama vetoes it, and especially if his “Mr Fixit” scheme gets shot down in the courts, then at least Republicans will have stumbled upon an issue.

We can expect to hear a profuse apology from the Republicans for embarresing Obama any minute now.

Bill Foster, Democrat representing the 11th Congressional District of Illinois, is an Aye.

The 11th is competitive. The GOP is likely to pick this seat up anyway, but Bill Foster is panicking.

I’m in favor of letting the dems twist in the wind, but I want to be sure I understand why y’all think this is a trap for the GOP.

That makes two of us, Karen Sacandy.

Complicating a disaster, isn’t a plus.

Hmmm, maybe the complicating IS “the trap”.

Link to one take on Upton as a trap.

He says it will deliver quicker “rate shock.” If so, I don’t see the Landreiu (sp?) bill as a bad thing. Rate shock makes people ANGRY.

They’re angry now, and going to get angrier. What’s the downside????

Not seeing it. No matter what passes, the thing is going to implode.

The ONLY good news here is that A. dingy harry trash-cans it -so the BLAME GOES TO THE d-cRAT SENATE, or B. OBOZO vetoes it if the desperate d-cRAT Senate supports it (unlikely) then OBOZO gets THE BLAME.

The lead editorial in today’s Wall Street Journal; supports the Upton bill because they say it will allow insurance companies to COMPETE AGAINST the OBOZO exchanges with better, cheaper policies – thus destroying the exchanges and much of the corrupt socialist extremist foundation for OBOZOCARE.

While the Dems are panicking, this is the time to vote AGAIN to REPEAL.

It will be hard for the Dems to resist elevating their re-election chances.

A good explanation of why the “noninforcement” trick by Obama will not work.

In a nutshell, consider if an insurer issues a policy based on non-enforcement. Then a policyholder challenges a non-payment, and cites federal law that something (i.e. free birth control) should be covered. It is impossible for the insurer to defend themselves, as the President nor any federal or state court are bound by the President’s non-inforcement statement.

Guess the Obama just went up there and winged it. The fact that it held the Democrats together means that they aren’t doing of their own thinking.

The bill just passed would also make a bad situation worse. The only hope is that the individual market will be the canary in the coal mine and force a full repeal before the employer mandate occurs.

Thanks for the link, that’s excellent info. Those insurance CEOs need to keep in mind that the statute of limitations will extend beyond Obama’s term 🙂
Here’s another link with details on what can legally be grandfathered…and what can’t.
http://www.conservativeblog.org/amyridenour/2013/11/14/a-surreal-train-wreck.html

It’s a political stunt. Better to do as I’ve argued all along from before the shutdown and before we knew the website wouldn’t work: let the ACA take full effect and fail on its own without any interference from the GOP. Then it is owned by Democrats.

Even “trying to fix” it implies there is something that could be salvaged. This bill if enacted starts a tsunami of red ink because the people who “get to keep their plans” were counted upon to subsidize all the goodies in ACA and all the new freeloaders and tax credits.

Reid can’t really allow a vote on it, so it isn’t as dangerous as it might be, but it is still nothing but a stunt.

Obamacare is not about providing healthcare. It is about controlling the insurance industry. Like somebody said before, it is simply a shell that gives “the secretary” almost absolute power over the whole industry. Something in the lines of, “Nice insurance company you have there. It would be a shame if…”

Like I said, it is not broken.
It needs no fixing.
It needs repealing.
Wipe it out.
Back to the drawing board.

And for Christ sake, get rid of the word “comprehensive”.
Pass individual laws to address each different issue. “Comprehensive” is bullshit to force stuff (that we don’t need or want) down our throats.

Are they all crazy? They could care less about America or Americans.

Making this symbolic vote was a mistake.
The full force of Obamacare should be brought to bear immediately.
But another year, the hooks will be in, this thing will crash and we will be hearded into Socialized Medicine.
Can nobody see that the plan is working just fine?
We are sinking deeper by the minute.