Gonzaga students avoid expulsion for scaring off felon with handgun

Gonzaga students avoid expulsion for scaring off felon with handgun 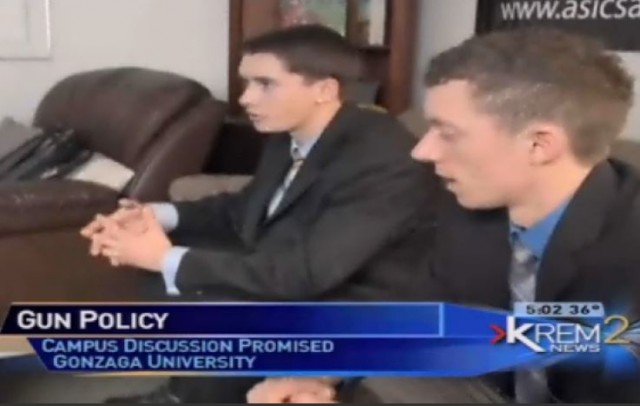 We reported over the weekend that Two Gonzaga students alive but facing expulsion because ignored gun-free policy.

The students just found out that they will not be suspended.  Via KREM.com, Gonzaga Univ. students allowed to stay following gun incident

Gonzaga University will not expel two students for using a gun to defend themselves in an off-campus and Gonzaga owned apartment.

They will be placed on probation for the rest of their time at the university.

Students Erik Fagan and Dan McIntosh were originally threatened with expulsion after they flashed a gun at a man with outstanding felony warrants who came to their door asking for money.

That man was later arrested.

Fagan and McIntosh were told by campus security that they violated school policy by having a firearm on Gonzaga University property.

Gonzaga said the building is part of university property even though it is off campus.

The Gonzaga President sent an open email to students on Saturday acknowledging calls to reevaluate the school’s rules on guns.

Putting aside the wisdom of the underlying school policy, it is gratifying to see an educational institution not invoke the “zero-tolerance” easy way out.

Doubtless on the condition that they give up their guns, right ? And the next 6 time felon that needs a little cash and comes a’ visiting is supposed to be given whatever he asks for ?

And many people are more afraid of a blade than a gun. Nobody has to be helpless.

Metal baseball bats are easier to explain when living in an apartment.

An ax handle for $10 at the local garden supply store also works. It’s about the right length, light enough for just about any adult, and made of ash or hickory. Packs quite a wallop when swung correctly, and you can jab with it in tight quarters.

Wasp spray is pretty good to, and you can hit from distance.

“The Gonzaga President sent an open email to students on Saturday acknowledging calls to reevaluate the school’s rules on guns.”

With all of the federal money that the university receives, is there an argument that, in threatening to punish students for keeping and bearing arms, the school was acting under color of law and thus in violation of the 2nd amendment? Sounds like infringement to me.

you can always give away rights, as these students arguably did in accepting the housing rules.

When I was a kid, no one could “give away a birth right for a mass of pottage”.

You could argue that they did that, but the wording of the applicable policy would not support that argument. The policy in question was worded to apply to locations “on campus”. The apartment in which these young men resided, while owned by the university, is off campus.

It would not be reasonable to permit everyone to set and respect their own policy. It would also not be reasonable to punish someone for legitimate acts of self-defense. This is a good compromise which will allow the university to review the merit and rationality of its policy affecting the right to keep and bear arms.

[Dean Wormer’s plotting to get rid of Delta House]

Dean Vernon Wormer: They are? Well, as of this moment, they’re on DOUBLE SECRET PROBATION!

They will insert the words “including off campus housing” in the current rules.

Anyone over the age of eighteen and free of criminal convictions should be able to possess a firearm, PERIOD!

Does their lease specify that it is subject to “on-campus” rules and regs, or was the university acting in the manner of an ordinary landlord (and is the firearm policy mentioned in the lease?)

My understanding is that the state of Washington is a shall issue state for conceal carry and it permits open carry. The school owns the apartment building, but it is not located on campus. Their rule stating “no guns” would not hold up in court as it is direct violation of the conceal carry law for the state.
The student had a legal carry permit. A landlord cannot ban guns from a private apartment anymore than he could state that the residents cannot have members of particular races visit, etc. Just because something is inserted into a lease doesn’t make it legal, and if it gets challenged(as it should in this case) a court will decide as to it’s standing.

This is exactly what I stated in my comment on the first run of this episode of Idiotic School Tricks. Had they expelled these two, there would have been a huge damage award. As it is, even probation is a tort, since the legal adviser for all schools in Washington is the Attorney General and it is obvious nobody from the school asked for legal advice. We have a useless Democrat as AG but he isn’t retarded enough to have told them it’s okay to play games with gun rights.

As it is, these guys probably don’t have any damages since the publicity is likely positive for their careers.

I think being placed on probation for the rest of their time here creates damages to them. It becomes part of their permanent college record, for one thing, thereby casting a shadow on their good name and reputation.

Keep in mind where Gonzaga is located.

Now now. It’s in EASTERN Washington. They’d secede from the Putrid Sound side of the state if they could.

This is the exact statute in Washington state that prohibits a municipality from restricting your gun rights.

“Fagan and McIntosh were told by campus security that they violated school policy by having a firearm on Gonzaga University property.”

The same campus security that failed to prevent a six time felon from entering said campus and threatening students.

Well, now the university has pinpointed a unarmed residence. Gun free zones are very dangerous. Now if they are injured — they or their survivors can OWN that college.

They will be placed on probation for exercising their constitutional rights? I’d sue Gonzaga.

They still don’t care about the students’ lives. They’re just responding because they got caught. Leftist Ideology trumps human life every time.

Did they back off because this was off campus and they might face a lawsuit that would forever forbid their nonsense?