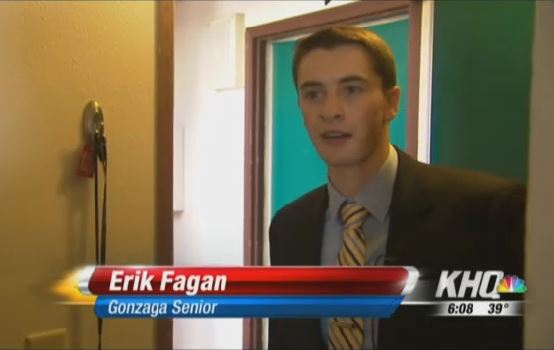 Thanks to reader Michael for the heads up about this story.

Two Gonzaga students are facing possible expulsion from the University after they pulled a weapon in self defense as a six time felon attempted to get into their on campus apartment. According to the student handbook, students may not possess handguns on campus or university owned property.

On Friday a university discipline board decided to move forward with sanctions, including possible expulsion, for using the weapons. The students will learn in the near future about their future with the school. It all happened late in the night on October 24th when roommates Erik Fagan and Dan McIntosh were hanging out in their university owned apartment.

At 10:15 Fagan answered the door and was greeted by John Taylor. Taylor is a felon with an extensive criminal history and when he arrived Fagan said Taylor showed him what appeared to be an ankle bracelet as he tried to intimidate him. Fagan said Taylor then demanded money and was frustrated when he was turned down.

Taylor then attempted to force entry into the apartment. At that point McIntosh brandished his pistol. McIntosh has a concealed weapons permit for the gun and did not know it was in violation of policy at the time. Once Taylor saw the gun he left the property. McIntosh said Spokane Police took Taylor into custody after their report because he was wanted on a Department of Corrections warrant.

Mr. Taylor likely thought…with ample justification…he was predating in a “hunting preserve” where all the prey was carefully made helpless.

Gonzaga utter failed to protect these students as can clearly be observed by the fact that the students were confronted a six time felon, who attempted to get into their on campus apartment.
To take any action against these students, who acted in self defense, is to say that they were supposed to be consigned to a campus statistic, by an administration that places it’s rules above the best outcomes of it’s students.

At first glance I thought this tory was about two fencing students saved by their large breasts.

Erik Fagan and Dan McIntosh will have plenty of support when push comes to shove. This policy is about to become a test case.

WA state is an open carry, “shall issue” CC state. We routinely vote down efforts to ban or limit weapons carrying. Just last week, the Seattle library dropped its no-gun policy because state law prohibits any local infringement on the right to carry.

Gonzaga is supposed to run a law school as part of its method of extracting obscene amounts of money from students and their parents. Maybe the students should apply to the law school as “needy” clients with an important constitutional issue and suggest that their cause become a class project.

This state embarrasses itself with its pathetic leftist policies which do nothing to help the people they are supposed to help. Dumb azz progs can’t even comprehend 2-1 margins on maintaining gun rights.

I only live here for the weather and my cranky conservative friends.

If you could fence off King County and give it to California, you could have your state back.

I really hope this becomes a test case. After all, these men are lawfully carrying a weapon in their own domicile. How can an administrative rule by a third party nullify a lawful statute?

LOL, this was in Eastern Washington. Spokane is famous for it’s lib ideas, probably because Gonzaga is Spokane.

Gonzaga is pretty darned loopy, even for the liberal enclaves in Washington. Maybe if King county were given back to California the rest of the state could just point and laugh; as it stands they seem to be a bellwether of where the state is going.

Umm, Gonzgaga, do the sane among us really really have to notify Pope Francis concerning your STUPIDITY?

They have already been the object of reprimand for deviance from Catholic teachings.

This probably doesn’t violate any doctrine, though. Better to shame them through the state.

Hmm… since the highest principle known to Academe is “carpe pecuniam,” maybe the answer is a law requiring a full tuition refund in cases of expulsion.

Sue the school. There can be no policy that takes away your right to defend yourself.

When did the school discover there were guns belonging to these students? After they used them appropriately to save their own lives.

What’s the value of a lawsuit? EASY! The kids will learn more about the law then they would have if they spent 3 years in law school.

After the lawsuit settles Gonzaga has options:

One: They deliver a certificate of graduation.

Two: They expend capital defending themselves.

3: Perhaps a few of the Administrators will be ousted?

4: What’s needed to turn this into the Streisand effect?

5: Gee. How many parents ahead, celebrate “Gonzaga?”

6: Funny way for your name to hit the heights.

Anybody placing bets that the president of the school resigns?

Yep, they should have called the police, who were only minutes away from responding after the fact; body bags would have been supplied by the local ME, no extra charge.

Progressives want gunfree zones, greatly enhances the survival of its goon squads when they arrive, and those goons will be here as soon as gunfree zones are everywhere. Goon squads aren’t safe until the proles surrender all their guns.

It’s not that they had or even used a weapon that’s the problem. It’s that the kind of people who would legally register a gun just are not higher ed material.

Perhaps the college administrators are just being practical. I suspect that they do not live where the students live. If they make the student area a safe hunting zone for the criminals, the criminals might stay out of the administrators’ neighborhoods where a homeowner might be armed. It may just be an unethical form of crime prevention (displacement) by making another neighborhood attractive to the criminal. This system will not work if the student victims do not cooperate by actually defending themselves. Discipline!

People are slightly off here.

The two men should sue the school for being physically assaulted on campus. The school passes rules which prevent people from defending themselves. At that point they have assumed responsibility for the safety. Now the men are assaulted and potentially avert harm because they violate those rules.

I can’t see how the University is not responsible for whatever damage has happened to their education.

MTLD, you analysis is spot on, at least in what is to me, a logical argument. Certainly would like to hear a first rate constitutional lawyer’s comments on your point.

It’s not the best policy, but the University does have the right to set rules governing what happens on its own property. As a parallel, consider freedom of speech, which is a less controversial right, and guaranteed by the constitution. Yet if you went to a synagogue to unleash an anti-Semitic rant you would be shown out the door, and rightly so.

But I would like to see a test of whether the university incurs additional responsibility for security if it bans defensive weapons, as Mouse suggests.

“It’s not the best policy, but the University does have the right to set rules governing what happens on its own property.”

Not to the point of placing others in danger. Which is what a “gun free” policy does.

The university is not and should not be a law unto itself. It operates in the United States within the context of American law, the Constitution. Just as states can make no law violative of the the Constitution, no school should either.

“Death panels” exist in many places where leftist congregate and make “rules”.

Gonzaga to students: If you like your life, you can’t keep it.

Another “feel good; do bad” Liberal policy that is ingrained in our educational institutions.
That somehow, by banning firearms on campuses, bad guys won’t come there. And that “young people” won’t kill themselves with guns accidentally.

Of course, that isn’t the case. After all, we ask 18 yr olds to go to war and fire weapons that are capable of fully automatic operation. Certainly there are some young people who would shoot their eye out, but hey..how about a college class for freshmen on proper use of a firearm? Not mandatory, since any will come already with some knowledge or perhaps with some philosophical aversion to firearms.

Holophobia can be cured. Maybe we should start with the faculty and administration?

Gun Free Zones are an abomination.

Gonzaga would rather have their students killed and raped. The Liberals, the hoplophobes, the gun grabbers are all enabling rape, murder, robbery, and other violent crimes. They do this by inhibiting honest Citizens from having weapons, and by encouraging the criminals. They don’t care if you are raped or murdered. Indeed, they prefer it if you were raped or murdered. They need victims to fuel their ideological agenda.

Notice that the highest crime rates are in cities where gun ownership is most severely restricted: Chicago, New York, DC … Gun ownership in the US is up, and the death rate is down. Guns save lives. But the Liberals worship victims.

It is time to hold the Liberals personally responsible for the crimes they encourage and for the murders they advocate. Make them social pariahs. Call them out and denounce them.

Hey, Gonzaga Trustees, how many rapes did you enable, today? How many kids did you kill?

Gonzaga has decided the boys can stay, they will be placed on probation for the rest of their time at the university.

It’s outrageous that these young men were just protecting themselves and may be expelled. How long would it have taken campus security to reach them if that intruder had wanted to hurt them? Too long to be any real help. Time to put pressure on Gonzaga with phone calls and emails in support of these young men and their right to protect and defend themselves.