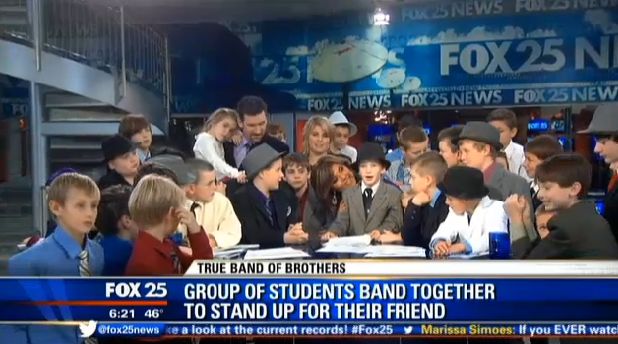 A first grade boy who suffers from a speech impediment got a big surprise when members of a Williams Intermediate School football team in Bridgewater, Massachusetts banded together to support him after it became known the child was being bullied.

Danny Keefe, who is a waterboy for the fifth grade football team, also wears a jacket, tie and fedora to his elementary school each day.  Danny’s differences allegedly made him the target of taunting from other kids.

The Daily Mail has the rest:

So when quarterback Tommy Cooney caught wind that Danny was being teased for his speech and dapper appearance, he jumped into action and came to school sporting a suit in[sic] tie to show his support for the special-needs boy.

The 11-year-old Cooney also spread the word about Danny Appreciation Day among his teammates, including Danny’s older brother, who immediately embraced the idea.

On Wednesday, Cooney and 44 other fifth-graders arrived in school and surrounded the dashing 6-year-old Danny, all dressed in jackets and ties.

‘This is the best day ever,’ a beaming Danny exclaimed as the older kids chanted his name in the library.

The first-grader’s father, Mark Keefe, who is the assistant coach of the Badgers, told the fifth-graders that they should be proud of themselves.

Cooney turned emotional while talking about his team’s beloved waterboy, tearfully explaining to the anchors of Fox 25 that the 6-year-old is part of their ‘band of brothers,’ and they were not going to let anyone bully him.

Danny’s mother said that when she found her son crying in bed the other evening, she asked him what was wrong, reported the Daily Mail. ‘I said, “What’s the matter?” and he said he felt very loved,’ she recounted. ‘So that’s my wish for him every night…’

Bullying, while not a new phenomenon, has attracted national media attention after several high profile stories in recent months.

But positive stories of kids supporting each other are starting to become more frequent.

Last month, a large group of supporters in Oregon rallied around a bullied high school student after the boy’s aunt posted a message on Facebook.  In the end, the alleged bully apologized and the two boys even high-fived one another.

And in September, a child’s letter to Santa asking for him to help put an end to the bullying his twin sister was enduring went viral online.  “I prayed that they will stop but god is bisy and needs your help,” the boy wrote in the letter. “Is it against the rules to give gift early?”

More examples for others like these, there may be hope. Adults need to be better examples for the children too.

This is the correct way to deal with a bully – to punch him in the nose. While the bully in this case does not have an actual bloody nose today, his nose is doubtless out of joint. Ridicule is a very effective devise when used correctly and not one single kid in that school does not know who the bully is.

Encouraging kids to handle situations like this themselves without the preening, condescending school administrators (bullies themselves), teachers and helicopter parents tut-tuting everyone involved. It’s a good way to teach any one of a number of very good lessons.

Exactly! Kids stepping up and taking care of problems like this, seeking the well being of younger kids is wonderfully civilized behavior.Christina Hoff Somers, in her article “Men, It’s in Their Nature” addresses the need for children, boys especially, to be civilized without loss of masculinity. These boys are managing that without the castrating influence of the public school administrators.

Good for Tommy Cooney for teaching his schoolmates a valuable lesson.

This story comes from my state senate district. Despite being Massachusetts, it’s filled with rather normal, hardworking people. It’s good to see this celebrated. Let’s keep in mind, among regular people, this is by far the rule and not the exception. The only surprise is that school officials didn’t cancel the rest of the football season or something.

…wears a jacket, tie and fedora to his elementary school each day…

Because this is America and he can. My brother cried copious tears when the Queen came to our country. My brother wanted to wear a long sleeved shirt and tie. He didn’t care that the Queen would not see him personally. That was what he wanted to wear, and though we did not want to be seen dead with him dressed like that, we could not talk him out of it. So, it’s all a matter of choice.

Aw, c’mon. He’s six years old. He has a wardrobe of regularly tailored (growing boy) suits and fedoras? Who gave him the idea to make this “choice” and turn himself into an attention-getting character?

wah, wah, wah. grow a pair. btw why try to grab attention and then whine when it’s not all positive?
anecdote: started school when i was 4. moved to a different school every year from k to 7th. new kid always is a target. by 3rd grade i knew enough to seek out the biggest kid and jack him one. did it every year. never won, but nobody f’ed with me after that.