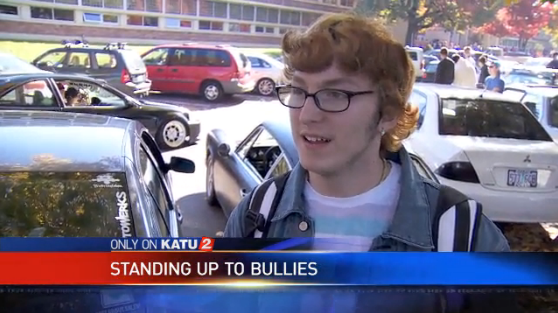 When the aunt of a high school student realized he was being bullied at school, she took to Facebook to invite what turned out to be about 100 of his “new friends” to meet her nephew at school and show their support.  It ended well, even for the bully.

Friday was a rare day when a kid who’s been picked on confronted his bully with the support of 100 people who showed up to rally for him.

It started as a single Facebook message posted by Halsey Parkerson’s aunt. She went to South Salem High School on Thursday to meet him for lunch. She overheard the bully telling her nephew that he doesn’t have any friends and that no one cares.

Halsey told her that it happens all the time. His aunt decided to come back for lunch Friday and through Facebook she invited all of his new friends.

And they came. Car after car showed up until South Salem’s parking lot became a traffic jam.

It was all for Halsey after his aunt put the message out on Facebook to one of her car clubs. The message spread, and at least 50 cars, containing probably 100 people, came – some of them as far away as Vancouver.

And that’s all it took to make a difference.

The influx of cars and people initially caught the school principal off guard, but once he realized why it was happening, he allowed it to proceed, according to KATU.

Bullying has once again taken center stage in the media after two girls were recently arrested for aggravated stalking in connection with the case of 12 year old Rebecca Sedwick, who took her own life after battling bullying for months.  That case has sparked much debate over how to deal with the problem of bullying in the age of social media.  It’s a complicated issue that draws arguments both from those who want more protection for children and those who urge the need to balance first amendment rights and caution against the unintended consequences of legislative proposals.

Bullying is part and parcel of a Democracy. What I mean is this: people think that if they can get a majority of people to think the way they do (the way they project their anger) they will overcome the objects of their disdain. Bullying is the MSM defined.

Forgive me I’m not the brightest bulb, I think I get your comment, you’re acknowledging, tho not condoning, the reality of it.

And commend these car drivers here who showed up in support.
Peace.

I am delighted for Halsey and his aunt and horrified by what happened in Florida but all over the world these bullying incidents are being highlighted and used for the social and emotional learning/Positive Behavior emphasis. Not when there is deficit or poor behavior but for all students. Getting at that affective level of emotion and values is essential if the goal of education has transformed into being change agents for cultural transformation.

http://www.invisibleserfscollar.com/are-educators-free-to-plot-mental-insurrections-in-students-with-impunity/ explains how essential it is to get at this level of consciousness in order to incite students to take action in the future. So don’t assume that every time you hear about bullying it is really about looking out for someone like Halsey or the poor girl in Florida.

Once again, it’s all about peer pressure

It is often associated with youth, and bad acts, but it is a part of everyday society from the West Wing to the news rooms across America.

Positive peer pressure is just as powerful as negative.

Nancy Reagan was mocked endlessly for her “just say no” campaign…it’s goal to instill peer pressure on young adults…and it worked.

The goal of the ‘Just Say No’ campaign was to instill resistance to peer pressure.

A modified version of that concept might help with the bullying problem. Teaching children how to deal with abusive and coercive peers, at school and online is important in a day where sexual harassment is part of that bullying even in Middle School.

The movie Cyberbully had some good insights and ideas about this.

However, parental wisdom and support are always crucial along with school support and wisdom – tragically, these are not always available to kids being bullied.

Salem’s a nice town despite all the libs transplanted from Cali. They once elected Chris Van Dyke DA. You may have heard of his dad, Dick. He had two high profile murder cases and both perps got over 200 years. (I-5 Bandit and The Oregon Museum Tavern shooter)
South Salem High School’s team is the Saxons. (Class of ’73)
Odds are my sister showed up.

Bullying is just a schoolyard term for intimidation, which is an unfortunately inescapable part of life. To believe we can protect kids or anyone else from such realities is nothing more than wishful thinking.

We have laws against physical assault and stalking. In most states, they seem reasonably comprehensive. There is no need to try to add a new definition and lower the level of intervention.

Am I the only one who sees this whole “event” as an orchestrated event? Too canned. Too perfect.

On a side note, I don’t care what the cause, the principle put the student body at danger allowing all the vetted strangers into the school. He completely broke all security rules and placed children at great risk. And in a “free to kill” zone. If I was a parent of that school I would be going after his arse to be fired. Hmmmm. on the other hand maybe a little experiment could be played out. How about a contingency of fifty vehicles show up with Bibles to support the Christian student not allowed to, oh I don’t know, maybe not allowed to pray and add to class discussions from a Christian worldview. See what the principle does then.

The aunt did the nephew no favors. Instead of teaching him to stand up for himself and not give a rat’s arse about being left out or name-called, she taught him the key is to be a bigger bully by bringing a mob to fight a battle that should have been between two people. And call it love.

Just a different perspective. A trap is being set. And we walk right in. Snap!

Oops, that should be ‘UNVETTED” strangers.

From the linked article: “She overheard the bully telling her nephew that he doesn’t have any friends and that no one cares. Halsey told her that it happens all the time.”

Does this mean that that particular kid told that woman’s nephew that he thought the nephew didn’t have friends or that no one cares, or that being called that was a broader concern problem for the nephew?

Unless the kid was consistently harassing or stalking, the actions of the Aunt were way over the top.

Honestly, what the aunt did was itself bullying. Getting a large group of people, including adults, to openly belittle and harass in a targeted manner a child is reprehensible. That the kid was accused of bullying should not justify his being bullied.

It is this type of targeting which actually perpetuates bullying be giving it a legitimate target: It means that there are some people deserving of this type of targeted viciousness. And yes, the type of people who gang up on a kid like that are just hiding their own viciousness and bullying under the guise of anti-bullying.