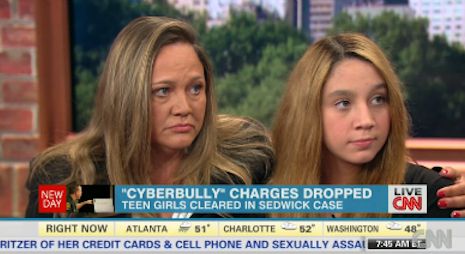 One of the Florida girls who had been accused of bullying Rebecca Sedwick is speaking publicly after charges were dropped in the case, and she says she wants to help stop others from bullying.

Thirteen year old Katelyn Roman (whom I had not previously named in posts until now, after she has come forward to speak), spoke with CNN Friday, accompanied by her parents and attorney Jose Baez.

“Words do hurt, and you should use them carefully and try not to hurt people’s feelings,” the girl said. “You can bully and maybe not even know that you’re doing it…You just need to look at yourself and say, ‘wait, am I doing something wrong here?”  She maintained that while there were some things she could have changed, she “didn’t really do anything wrong,” presumably referring to her dealings with Sedwick.

Roman also said she wants to start a campaign to help other kids stop bullying, even mentioning a desire to work with Omega Man, who champions anti-bullying at school assemblies.

Roman’s mother, clearly upset, talked about the hardships caused by having her daughter’s name and photo released in the midst of what became a very public national story, along with the family’s address and phone number.  “Isn’t everyone innocent until proven guilty?” she asked.

Jose Baez, the attorney for the family, also spoke about the situation.

“I think in the face of trying, in an attempt to try and bring awareness and do the right thing, to a very serious situation, these two children – specifically this child – this child here did nothing wrong, did no criminal acts, and I think, I certainly believe that there’s possibly a place in the justice system for bullying, but this was not the case. She’s here to show her face, in a face of innocence, not on a mugshot, and that’s important to Katelyn,” Baez told CNN.

Baez also lashed out again about the actions of the Polk County Sheriff, Grady Judd.  He said that his client has obtained counseling, “not only because of losing her best friend, but for what this sheriff has done to her.”

The three also spoke yesterday to the TODAY show.

In a press conference Wednesday, Baez asserted much of the same, and mentioned that he and his client’s family are mulling the possibility of a lawsuit.

Sheriff Judd responded in a press conference that same day, saying, “Our goal was to create an intervention; our goal was to bring this conduct to the proper authorities in the proper manner to make sure it was dealt with.  And it was dealt with.  If we’d not made an arrest, if we’d not brought this to the court system, would these children be receiving services today?  And the answer is no.  We were successful, we’re pleased with that.”

Judd has also been making the media rounds since the charges have been dropped in the case.  Speaking to Laura Ingraham, sitting in for Bill O’Reilly on his FOX News show, Judd again defended his actions.  He claimed that the goal was not to drag the girls through the courts, but to see them get counseling.

When it comes to the subject of publishing the young girls’ names and photos, the sheriff tried to rationalize by turning that back around at the media.

“The bottom line is, they were arrested for felonies. By Florida law, their name and their photograph is public record. The fact that you and the other media outlets choose to publish it is your decision, not my decision,” Judd said.

Interesting. “Nothing illegal” is equated with “nothing wrong”.

I’m not sure that bit of sophistry is entirely compatible with the progress of civilization, handy though it may be for those who know GD well that they did something not just wrong, but downright malignant.

This is inappropriate opportunism.

Ah… the precious little snowflake just wants to help others.

Alternate Version: Having avoided criminal prosecution, and upon advice of counsel, family of FL teen puts her out there as anti-bullying activist in advance of potential civil law suit.

Hollywood should snatch this young lady up…she’s got “acting” and lying down pat. Was that some kind of twitch in her eyes that kept them popping to her left at someone or something?

The fact that she got in a school-mate fight with someone who later killed herself does not make her the worst person in the world.

The Sheriff, on the other hand, badly jumped the gun. No way, no how would they have dropped charges against her if they thought they had anything like a case.

May justice prevail in her lawsuit.

That Sheriff really is a piece of work.

Not only did he pull out the girls’ photos on October 15th and call them felons, he calls them felons in this most recent video too. I guess he’s never heard of innocent until proven guilty.

Yeah, that Sheriff is really a rough, hard dude for expecting ugly, mean little girls to stop being cruel to a dead child. And, he expects their mothers to moderate the mean little girls’ awful behavior.

It’s just like expecting men to be responsible for the “thin-skulled plaintiff” — some of us expect to hold people accountable for the harm they do. In this case, honestly, it is the mothers.

The fact is that Baez shouldn’t only be mad at the sheriff for making arrests without evidence, or because he was dealing with children, but also because he was effectively making up laws to arrest people.

There is no reason to believe a single word from law enforcement in this case. Some girls in the middle school age range – who were friends – got into some series of childish spats which led a few to gang up on one of them. There was no physical battery alleged.

This stuff happens ALL THE TIME in virtually every public school in the country, and most of the private schools (some are more tightly controlled, but that isn’t primarily designed to stop “bullying”). It’s part of growing up.

It is very sad that one girl was so upset (and we have no way of knowing if she was reacting solely to the ostracism, or if other circumstances in her life contributed more to it) she took her own life. But if we are going to involve our criminal justice system to stop “psychological” school bullying, we’re going to need a boatload more cops, prosecutors, and courts.

For the love of Pete, did none of you people ever wear an ugly shirt or silly sweater to school, and hear about it for months?

WTF. We don’t get media coverage of the epidemic of violent black-on-white crime, it’s a effective “blackout.” But let some mean girls taunt some poor kid who kills herself, and it’s a freaking federal case.

Ban side partings & all will be well.

Given this thread and the story itself, it appears “rent seeking” is now de rigueur in the US of A. Oh, yippee…now comes the teen-aged twit who can’t speak a syllable without a prompter of some form….not a whisper without that reflexive eyes left twitch of hers.

A young girl is dead due to the bullying of these two. They should be held accountable.