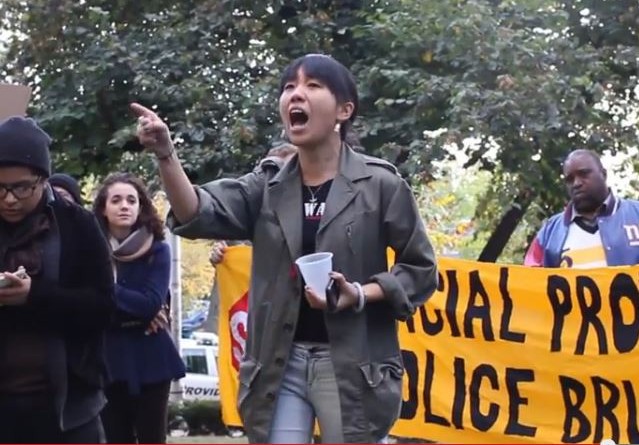 The students who shouted down Ray Kelly at Brown University have received some support on campus, most notably from three faculty members, Linda Quiquivix, Naoko Shibusawa, William Keach.

The Brown administration, however, was not at all pleased and is convening a panel to examine whether to commence disciplinary action against the shout-downers for violating campus policy.

There also has been widespread condemnation of the shout-down from students, who according to one poll, overwhelmingly were against the shout-down, but not against a protest outside the lecture hall. 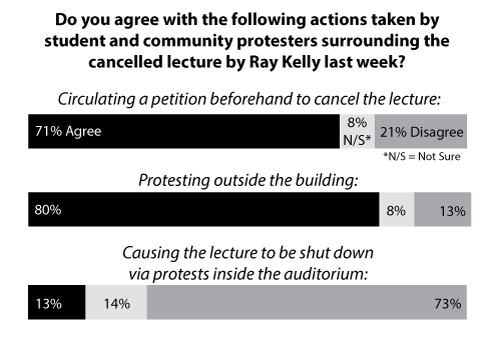 The majority of students at Brown appear able to distinguish that which Profs. Quiquivix, Shibusawa and Keach, and the student protesters themselves are unable to do: It’s one thing to protest, it’s another thing to shout-down.

The shout-downers are in a hole, so they have decided to keep digging, with an “anonymous” column in The Brown Daily Herald, Organizers and supporters of the demonstration against Ray Kelly: Standing for racial justice: A public statement .

It is a model of how grievance politics and loopy leftist social power theories pervert campus politics.  There was nothing that prevented the students from presenting their own views; they could have held a counter-lecture, protested outside (which they also did), or done any number of things to get their view across and present counter-arguments.  Instead, they opted to prevent Kelly from speaking, and thereby crossed a line which apparently is invisible to them.

We are students who organized and supported the Oct. 29 demonstration against the University’s decision to provide a speaking platform to New York City Police Department Commissioner Raymond Kelly. We continue to stand by our actions and the anti-racist goals that motivated them.

In view of the denunciations we have received from President Christina Paxson, media outlets and other students, we put forth this statement to tell our side of the story on why and how we organized.

First, we organized because students have a right to feel safe at their university…. It is unacceptable to invite a speaker to campus who makes students feel threatened or intimidated. Our demonstration was an act of self-defense. We protected our rights to feel safe on the campus we now call home.

We remain unconvinced that this lecture would have permitted a free exchange of ideas….The event was designed as a lecture to give Kelly the primary voice in the room, guaranteeing that any alternative perspective would be placed in a position of lesser power and authority….

In the end, we decided only collective action would protect the rights of students and the larger Providence community and enable us to participate in discussions from a position of equal power and without fear….

Organizers and supporters met after the vigil [the night before the lecture] to discuss tactics for Tuesday’s demonstration. Our plan involved the reading of a collective statement and individual testimonies throughout the lecture. During the question-and-answer session, demonstration supporters would share their stories and challenge Ray Kelly with questions. Though our petition had called for the event’s cancellation, our original plan was not to shut down the lecture but to reclaim the power in the lecture hall by giving voice to our stories….

A subset of organizers and supporters entered the lecture as audience members. The first two rows in the auditorium were reserved for “community members,” almost all of whom were white male police officers, including Providence Commissioner of Public Safety Steven M. Pare. After Ray Kelly was introduced, supporters of the demonstration stood up, raised their fists and read the following collective statement: “Asking tough questions is not enough. Brown is complicit. If Brown won’t recognize it, then we must. We stand in solidarity with the Providence anti-racism movement and all those impacted by racial profiling.” ….

In Brown’s history, student voices have been critical in pushing the University to adopt the progressive and open-minded approach to education that it currently boasts. The establishment of the ethnic studies program, the Africana Studies Department, the Third World Center, the Center for the Study of Slavery and Justice, need-blind admission and even the implementation of the Open Curriculum were all results of battles won through student activism and organizing.

This demonstration against racial profiling has similarly pushed against the status quo and sparked conversations on the issue of racism at Brown, in Providence and beyond. We also hope it has forced the administration to reexamine Brown’s complicity in systemic racism. As we move forward, we hope to continue these conversations in ways that hold the University accountable to its students and the wider Providence community….

The authors’ names have been kept private due to their concerns about possible punishment from the University.

“In Brown’s history, student voices have been critical in pushing the University to adopt the progressive and open-minded approach…..”

If they “continue to stand by” their actions, then they must be willing to accept the consequences, as said actions violate campus policies.

Well, yes, this much-ballyhooed ‘tolerance’ is not so much of a plea from the left, but something to be forced upon detractors.

True tolerance of ideas goes to die at Brown like it does at many other institutes of ‘higher learning’.

Mei Girl Chinese The youngest of …

So umm, loudmouth is Mei Tai Ho. It fits, donut?

Tried reading the comments at the end of the Brown article. Pathetic. What a bunch of sissy losers we’re raising in this country. “I’m scared,” says they, I say, “Go talk to a vet who has seen combat, you lily-livered coward.”

Happy for #BatShitCrazyKids, but can’t help but wonder if they felt ecstatic when Joe Wilson yelled, “You lie!”

As we move forward, we hope to continue these conversations in ways that hold the University accountable to its students and the wider Providence community….

“Conversations”? Is that what they imagined they were having with Ray Kelly?

This part aggravated me:
“First, we organized because students have a right to feel safe at their university…. It is unacceptable to invite a speaker to campus who makes students feel threatened or intimidated. Our demonstration was an act of self-defense. We protected our rights to feel safe on the campus we now call home.”

I think they believe the false narrative that they are threatened, but it is ridiculous. I worked with a woman who escaped Cambodia TWICE with her family when she was 12, because of the Khmer Rouge. (first time, they were turned away at the Refugee camp).

This group at Brown (and others that come mostly from wealth and influence), they confuse the concept of disagreeing with a concept with being threatened.

All leftists are cowards at heart. This is why they form mobs and shout down opposing views – which has been a regular occurrence on campuses in the USA since the ’80s when UN Ambassador Jeanne Kirkpatrick was shouted down at Berkeley.

This is also why their whining justification appears anonymously – the newspaper ought not have allowed this.

True civil disobedience aims to draw attention to unjust laws or regulations by openly defying them – AND accepting the consequences. Dr. King, Gandhi, and Thoreau all willingly went to jail to make their points.

These worthless leftist punks are worthy only of scorn.

They use force to violate the rights of others. Society should protect the rights of those exercising their freedoms, not those who disrupt them. The protestors should not feted and “reviewed” for discipline, they should have been arrested and prosecuted.

They don’t believe this garbage they write! If they really felt threatened, they’d cower, not provoke.

The fact is, they feel PERFECTLY SAFE to instigate trouble because they know the WORST that will happen is a slap on the wrist. They know this.

They bully because they are, like Obama, wannabe dictators. I went to Emory University and U.Ga. law school – saw this type of bully in both places.

And by the wayyyyyy— would they quit dressing like they’re impoverished 17th century peasants! Those girls – too ugly! This isn’t communist China. You don’t have to wear the ugly uniform to avoid re-education camp. If 17th century peasants could even fathom the luxuries of 21st century America, they would find it unfathomable that those so wealthy would dress so poorly.

>>”would they quit dressing like they’re impoverished 17th century peasants! Those girls – too ugly! This isn’t communist China. You don’t have to wear the ugly uniform to avoid re-education camp.”

That’s part of the deal, how they identify with the downtrodden, expiate their liberal guilt and share in the cachet of the victim class (as they tote around their Ipads and Iphones and other indispensable accoutrement of evil corporate capitalism.)

Too true! I don’t see how men can stand to be with them!

What would these brats do if they didn’t have “the issue of race” to screech about endlessly? I don’t know, say, go to classes? But given the state of modern higher education, maybe it doesn’t make any difference whether they go to class or not. In fact, maybe it would be better if they just dropped out and enrolled in trade school. Better for both their minds and futures.

So true – they should go to trade school, a la Mike Rowe’s advice. I have a debtor of a client who went to college, graduated, has $100k of debt, and drives a golf cart to sell beverages on the golf course…. at $8 an hour….

Colleges are taking advantage of our inexperienced youth.

Besides, we ought to be emulating Saudi Arabia and not allowing anyone, I mean ANYONE, from a Muslim country in to begin with.

Muslim society is theocratic, and finds murdering Christians en masse (sp?) to be perfect social policy. Eject them, profile them, before they murder us and ours.

If you can’t put your name on it, don’t write it.

No fascist is as rabid as a useful idiot, such as the woman shown above with her mouth open.

They call themselves free. Ha

Accountability for others. Anonymity for us. The philosophy of cowards.

“The majority of students at Brown appear able to distinguish that which Profs. Quiquivix, Shibusawa and Keach, and the student protesters themselves are unable to do: It’s one thing to protest, it’s another thing to shout-down.”

If correct, this is very promising. Shutting up your opponents, thereby eliminating from consideration any ideas in conflict with your own, is a vital tactic of modern leftism (or socialism, progressivism, or any of the other totalitarian fantasies). If the majority of Brownies realize this, then they’ll never be good lefties. Which is good, and, for Brown, a bit of a surprise.