Breaking: France refuses to allow Obama to sell out to Iran on nuke talks

Breaking: France refuses to allow Obama to sell out to Iran on nuke talks 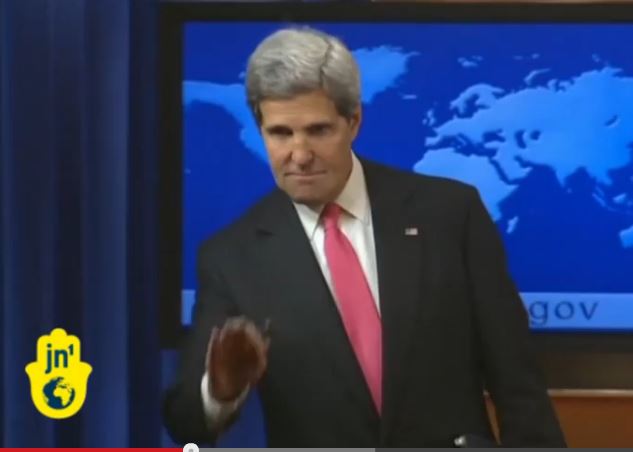 With a fevered and frantic breathless pace, Obama via John Kerry has been pushing to sign a sell-out deal with Iran that would ease sanctions without shutting down Iran’s nuke program.

Benjamin Netanyahu was furious when he found out that Kerry had misrepresented what the proposed agreement would be, not to mention Kerry running at the mouth to bash Israel on the talks with the Palestinians.

Netanyahu was not alone.  France was uncomfortable with the deal Kerry wanted to sign, even as Kerry huddled with the Iranians trying to get ‘er done.

Thank you France for at least buying us some time to prevent the historic sell out of Israel that was in the offing as recently as early today.

Via NY Times, Talks with Iran Fail to Produce a Nuclear Pact:

In the end, though, it was not only divisions between Iran and the major powers that prevented a deal, but fissures within the negotiating group. Earlier in the day, France objected strenuously that a proposed deal would do too little to curb Iran’s uranium enrichment or to stop the development of a nuclear reactor capable of producing plutonium.

“The Geneva meeting allowed us to advance, but we were not able to conclude because there are still some questions to be addressed,” the French foreign minister, Laurent Fabius, told reporters.

Israel lobbied hard against the deal on Saturday, with Prime Minister Benjamin Netanyahu and Strategic Affairs Minister Yuval Steinitz reported to have spoken to representatives of some of the P5+1 nations. US President Barack Obama called Netanyahu on Friday after the prime minister publicly castigated the emerging deal as “very, very bad” and “dangerous” and said he had pleaded with Kerry not to sign it. Netanyahu also spoke to Russian President Vladimir Putin.

The Jerusalem Post reports on how Israel was side-swiped as Obama-Kerry’s negotiating position collapsed in favor of the Iranians:

But over the weekend, Israel learned that the deal on the table is far worse than the one presented to it on Wednesday, and included four clauses for the easing of sanctions rather than just one. Israeli officials said they became furious when the details of the actual deal reached them, describing it as an “enormous mistake.”

“[US Secretary of State John] Kerry left with food for thought after a tough conversation with [Prime Minister Binyamin] Netanyahu,” the political source said.

At the same time, he stressed, the US did not deceive Israel. Instead, the Americans “folded” between Wednesday and the weekend, “maybe because they very much want to reach an agreement and be done with this,” he added.

OmG!! The end is nigh… The French got more stones than Obama and Kerry. Probably know how to use ’em, too.

There is a difference between surrender and betrayal.

When the “cheese eating surrender monkeys” think it’s a “bad deal,” what does that make Mr. Obama ?

Does this mean no peace in our time?

You know that the end times are near when the French are scolding us for surrendering.

Now that there’s downright funny no matter who you are.

Mon Dieu! John Kerry and Obama are more French than the French!

Mon Dieu, France taking a harder line on Iran than the US. It is no surprise though, Democrats have been trying to sell out the Israelis for a long time now.

The French may not be friends of Israel but they don’t like the idea of Iran having a nuke even less.

They have enough on their hands with firebombed cars. They don’t want to deal with nuked cars.

“If you like your security, you can keep your security. I’m sorry if modified sanctions caused some countries to be wiped off the face of the Earth.”

How long until we call it like it is? Is identifying obama as Muslim, as he self-identified, more difficult than pointing out that he is a serial liar?

Oh the bitter agony of defeat!

Unbelievable that France would actually have more balls to stop this deal than our own Secretary of State.

We need to clean out Washington D.C. like Hercules cleaning out the Aegean Stables.

Will the Potomac suffice?

But then, given Obama and Kerry are what we have, perhaps no surprise after all.

Recall that for quite some time, France supplied Israel with modern fighter planes but then in a twist, the USA took over that role.

So, while France has not always been viewed as a strong supporter of Israel, France has had some good moments as a friend of Israel.

Wonder what “Freedom Fries” are now called in Tel Aviv

The French are saving lives here.

Hey, want to read something funny? It’s the Nobel Committee’s press release for Obama’s peace prize:
http://www.nobelprize.org/nobel_prizes/peace/laureates/2009/press.html
I especially like this part at the end of the first paragraph:
“The Committee has attached special importance to Obama’s vision of and work for a world without nuclear weapons.”

Like most of the so-called Peace Activists, that means no nuclear weapons for the US, only.

Have you spit on a pacifist, today?

Thats Obamas game, lie through your teeth and rush to get it done. No matter the consiqueces unintened or not. Then he gets to say I accomplished this or that. He did that with Dodd/Frank and Obamacare

It’s getting to the point where I want to wear a brown paper bag over my head.

Obama and Kerry are two absolutely worthless human beings. Neither one of them has ever done anything of value to humanity.

If they were both boiled down to retrieve their salable essential elements, it would probably be a good idea (after the due process of law, naturally).

That’s interesting. What’s in it for the French Socialist?

Israeli technology. When was the last time the Muslims invented anything that was worth having?

You would have us believe that a member of the administration lied to us. That’s impossible.

Was Kerry forced to surrender his beret too?

The Magnificent US Marines, Remembering Corporal Jason Dunham, and Weekend Links! | November 10, 2013 at 9:59 am

[…] Jacobson at Legal Insurrection has up a post today on “Breaking: France refuses to allow Obama to sell out to Iran on nuke talks”. France. […]

There is a growing anti-islamic movement within France itself. Whether or not this had any influence on France’s position at these talks I have no idea but I’m glad to see that there is at least some resistance out there to Obama selling out our best ally in the Middle East.

I would love to hear Hillary on this. Is she in favor, as former Secretary of State, or against. If asked, she would, of course, give a non answer answer.

We’ve sunk so low that FRANCE is more sensible and reasonable than the US?