You have to understand, they are not his enemies

You have to understand, they are not his enemies

I’m not overly enamored of the complaint that Obama will negotiate with the Iranians, Syrians and Russians, but not with Republicans.

The complaint sounds a little whiny.

But it does prove a point. A point that I made long ago about how Obama treats the Israelis and other friends of the U.S., like Honduras and Hosni Mubarak.

This poster used by Rep. Doug Lamborn on the floor of the House is making the rounds (video here). 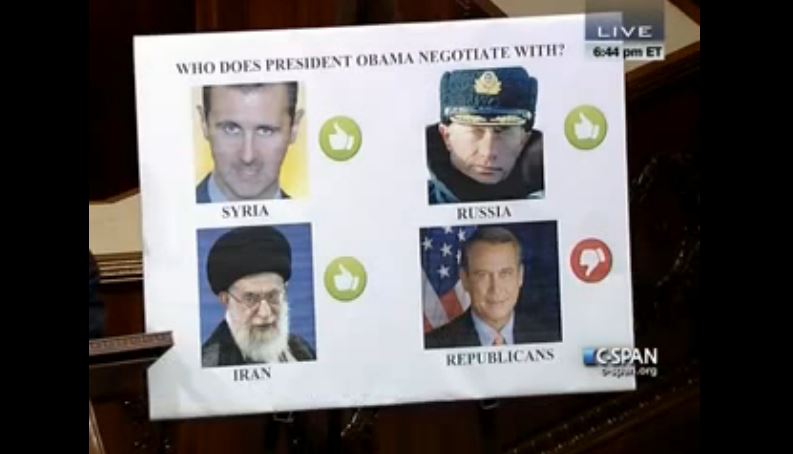 Obama and his supporters do not treat foreign enemies of the U.S. with half the vitriol and name-calling they direct towards Republicans, particularly the Tea Party:

He has deployed German shepherds to intimidate his enemies visiting the WWII Memorial in DC.

Correction: at the Vietnam Memorial.

I initially had a funny vision of the Vets just giving the dogs orders and the dogs obeying: “Sitz!” = Sit! followed by: “Braver Hund!” = Good dog!

Then the seriousness of the claim crossed my mind and I wondered could it really be true? Would they really do that!? Yea, they would and they did. Here is a photo:

The dog is not needed on that site with those visitors there!!!

Wait for the video of the dogs and fire hoses.

Professor, why isn’t the Durbin challenger story on this website? It just barely caught my eye at the top of the scroll.

I would LOVE to see Dustbin fail. He has been in Illinois politics for waaaay too long!

A blast from the past with fallout foreshadowing things to come:

It’s better these days to be a U.S. adversary than its friend.

President Obama promised he would win America friends where, under George W. Bush, it had antagonists. The reality is that the U.S. is working hard to create antagonists where it previously had friends.

That’s one conclusion to draw from President Obama’s decision yesterday to scrap a missile-defense agreement the Bush Administration negotiated with Poland and the Czech Republic. Both governments took huge political risks—including the ire of their former Russian overlords—in order to accommodate the U.S., which wanted the system to defend against a possible Iranian missile attack. Don’t expect either government to follow America’s lead anytime soon.

“If the Administration approaches us in the future with any request, I would be strongly against it,” Jan Vidim, a conservative Czech lawmaker who voted for the system, told the Associated Press.

Exposing Obama doesn’t seem whiny to me, it is important to demonstrate his priorities.

I came across this year old video the other day with D’Souza, which lays out why Obama insisted on shipping back the bust of “colonialist” Winston Churchill. Obama thinks the US is too powerful, so he supported overthrows in Egypt and Libya (whose leaders basically supported us), but not Iran (or Syria, it would seem).

And Obama can’t weaken our military fast enough. He is moving us back toward pre-colonial balance of power, mostly by weakening us in every way.

Obama, like Zinn & Chomsky believes his own folly – America, Big America, is to blame for all the ills of the world.

We ain’t that big.

Lots of others all around the world make their own ills – even their own mental illness and delusions.

To Obama, foreign affairs are a mere sideshow. He can talk to those people because it has no meaning to him. What goes on here is something else, however. This is HIS country and he will NOT tolerate anyone acting as if it is not.

At this point, there seems no resolution possible to us. All we can do is wait. Eventually the public opinion will shift against one side or the other and force them to give in. We are starting off in the hole, but Obama through his ham-handedness is helping to even up the blame, especially when it comes to disrespecting the veterans and closing parks and memorials that require no federal expenditures.

But it is a roll of the dice. It doesn’t matter how right we are or how many normal department-level funding resolutions we pass because the media has stacked that deck against us. So we depend on the public to see through the smoke and muck thrown up by Obama and his propagandists.

Unfortunately, Mencken’s century-old observation still holds water: “No one ever went broke by underestimating the intelligence of the American public.” Forty years of federal control over public education has only reinforced the point. And this electorate elected Obama twice. Think how mind-numbingly stupid you had to be to vote for Obama or not vote for Romney. That’s what we, and the country, are up against.

We are dependent on dumb luck and the good will of dumb people. This is what happens when you follow a loudmouth with no plan over a cliff like lemmings.

[…] You have to understand, they are not his enemies (legalinsurrection.com) […]

I don’t think it is fair to say Obama lives inside a bubble because bubbles by nature are thin, transparent and easy to puncture. If he thinks the optics on his ramping up these moves are on his side he is seeing things through a haze of sycophancy and recreational substances.

I want to throw the same bag or excrement at Boehner as I do at the rest of three other lunatics on that post.

After all the damage he’s done, his presence is just as offensive — and always will be.

If I were Obama, the LAST thing I’d be concerned about is Boehner. That is our problem.