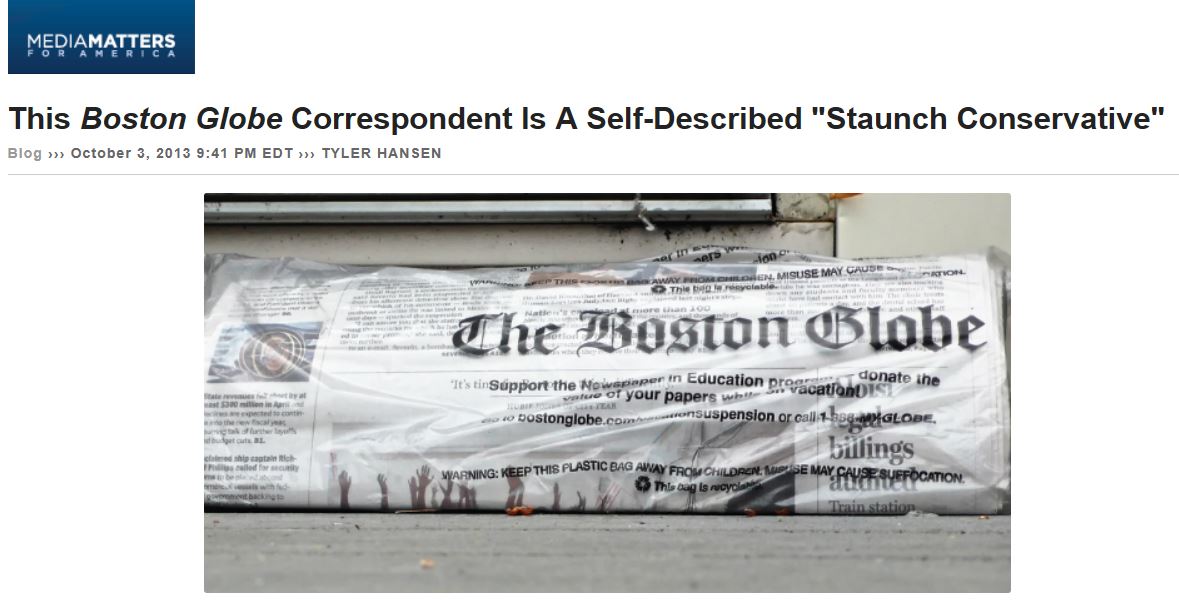 A blog post yesterday at Media Matters pretty much sums up what is wrong with the organization.

The Boston Globe is about as liberal a newspaper as they come.

As we demonstrated during the 2012 Massachusetts Senate campaign, The Globe ran cover for Elizabeth Warren, touting her supposed Native American ancestry but burying the correction when that turned out not to be true, and doing a puff piece trying to resurrect Warren’s flimsy claims of “family lore” when in fact the substance of what the Globe found contradicted Warren.

If there is a problem The Boston Globe does not have, it’s too many conservatives on staff or hostility to Elizabeth Warren.

Media Matters appears to feel differently, because it found a Boston Globe reporter who apparently was not sufficiently deferential to Warren, and he’s a conservative!

It’s not that the writer wrote anything false about Warren, he just didn’t insulate her sufficiently: 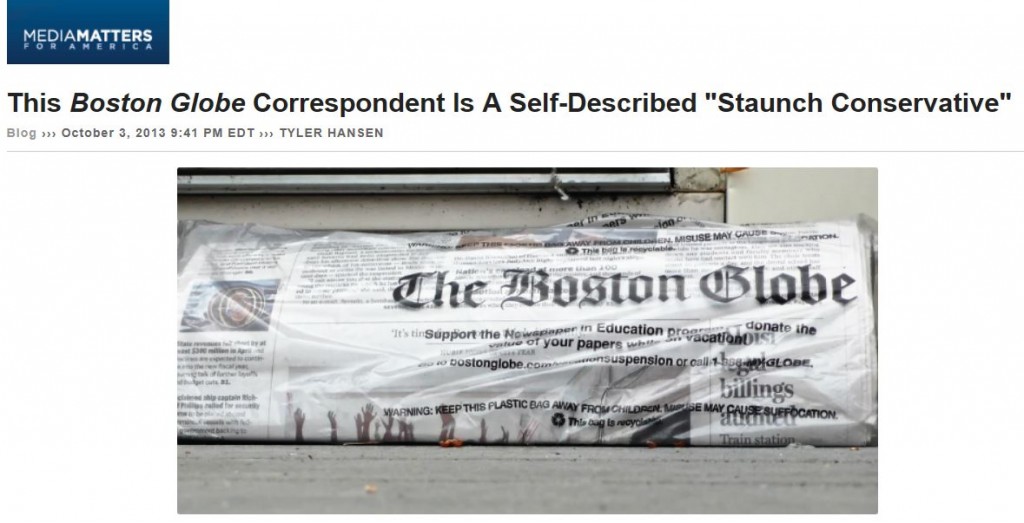 The Boston Globe‘s Mattias Gugel covers political issues like Sen. Elizabeth Warren’s (D-MA) reaction to the ongoing government shutdown and the tea party — but he also has a right-wing resume and is a self-described “staunch conservative.”

On October 2, Gugel authored an article highlighting which staff members in Sen. Elizabeth Warren’s office were furloughed due to the on-going government shutdown — a shutdown led by conservative Republicans in the House that Warren has argued against. Gugel wrote:

Despite the government shutdown, Bay Staters seeking to contact most members of the Massachusetts delegation in Washington can still reach a staffer by phone, with the exception of Senator Elizabeth Warren’s office .

Warren, a Democrat, determined that having staff answer phone calls is not an essential part of her office’s job during a shutdown, leaving constituents to go to voice mail when they call to give their opinion or to seek services or assistance.

Also on October 2, Gugel wrote an article for the Globe centered on congressional tea partiers’ reactions to the shutdown — characterizing them as “combative, defiant, defensive, and resolute.”

But Gugel has previously been vocal about his support for tea party Republicans and once wrote in their defense that, “Bipartisanship ended during the glorious reign of President Barack Obama.”

Gugel also previously worked as an intern for U.S. Sen. Ron Johnson (R-WI) and as a staff assistant for State Sen. Joe Leibham (R-WI). He praised a list of “leading conservatives” from Wisconsin that included Republicans Rep. Paul Ryan and Gov. Scott Walker, and hoped that, “someday my name might be added to that list.”

Gugel, who once described himself as “a pretty staunch conservative all around,” believes that Obama’s 2012 re-election campaign slogan “Forward” is a Marxist code-word aimed at “diehard liberals because of these socialist connotations”…

So?  Are “staunch conservatives” not allowed at The Boston Globe?

If Media Matters had a gripe about the content of Gugel’s writing, that would be one thing.  But to single him out because he is a “self-described ‘staunch conservative'” smacks of a witch hunt.

Following suit, Reid will hold hearings soon with this question in mind …

“Are you now or have you ever been a member of the Tea Party?”

How many people are employed at The Boston Globe? And they found, wait for it, wait for it … one conservative, that’s right ONE.

The least liberal person on the payroll is a conservative.

Comrades, ideological purity at all party organizations and functions is a must. Counter-revolutionary and revanchist behavior must be suppressed in the strictest manner.

Remember comrades, the revolution demands your heart and soul.

There, did I get that right?

I like Gugel’s opinion/statement that “Bipartisanship ended during the glorious reign of President Barack Obama.” Very good observation of fact!

But I don’t give a rat’s butt about anything that Media Matters says or does; they are on parr in significance with The Democratic Underground. This is the first I have heard of them in a year or two since Fox complained daily about their nonprofit status; guess that went nowhere, I don’t know.

Does anyone know what the price of tea in China is this afternoon? (Sarc)

Expect Elizabeth Warren to pull out her scalping knife and tomahawk (you know, the Cherokee-styled ones, put on her hippy macramé moccasins and breechclout(no doubt she uses one), and dump some tea in Boston Harbor in protest.

They’re gonna have to be renamed…..

Crap, I just made the mistake of going to the Media Matters website. It is nothing but Fox did this, Fox did that, Hannity is a *&^%^&*, oh, and Fox is the root of all evil! How did they find the time to scrutinize anything other than Fox?

Here’s what really happened:
George Soros was reading the Boston Globe while taking his daily “constitutional.” It was then that he realized that a “staunch conservative” was infiltrating his outhouse of journalism. George had a s**t fit right then and there and made a phone call.

I hear they’re making those filthy Cons wear a big red-white-blue flag on their clothes so decent people can identify them and steer clear. I hear the mongrel Cons can only shop at stores with big red-white-blue flags to keep them away from pure Boston businesses. But let’s face it, The Con is still in the city. Like rats in the sewer, they commit their vile work under our very noses.

Can there be a solution to the Conservative question?

What blows my mind:

Talk to a liberal / progressive and the honestly see themselves as a rebel, or (aptly named Democratic) Underground, as “one who boldly asserts their high minded individuality”.

The reality is that leftist / progressive thinking is very lockstep (variations of the same color of blue, are still blue), wish to silence those who are not like them (conformity), and are willing to sacrifice all these noble utopian high ideals to get their their “ends justify the means” endings.

“We must have diversity” – so we define diversity so in reality it’s strictly anti-Western/U.S. critical theory, and silence anyone who disagress. IOW it’s based on race and gender, things one cannot choose, but any IDEAS that make one a true individual are squashed.

The “diversity” they’re talking about is LETELU: “Looks Exotic, Thinks Exactly Like Us”.

Media Matters would be shocked if they learned we have Tea Party moles in their organization reporting intel on their operation and connections inside the White House and other communist organizations. shhh…

We are everywhere! From sea to shining sea. And because our mothers don’t abort us, our fathers nurture us, we are growing in numbers.

I have a sister deep the heart of Liberal Land.

And a Niece and her husband working from inside Academia.

They know how to survive being told, “Oh….you’re one of THEM” if they’re spotted looking at Drudge.

Or being called “My Little Conservative” for a semester because you defended the right to own property.

No!!! Americans are everywhere. Even at The Boston Globe. What is happening to this country? People still cling to The Declaration of Independence and The Constitution.