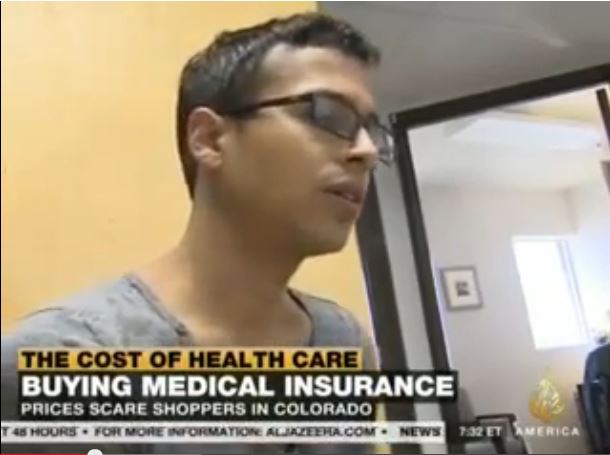 There is so much wrong with Obamacare and HealthCare.gov that the news is swarming.  Or is it swirling?

So we’ll just keep a running list today of what’s new in the past 24 hours.  If you have links, post them in the comments.

We’ll have a separate post, if needed, for “Breaking” news or if we just feel like it.

Let’s start with this Al-Jazeera America story about Colorado (via Weekly Standard):

As the first month of the Obamacare rollout comes to an end, most of Pennsylvania’s navigator organizations said they have not guided anyone to enrollment in the federal health insurance exchange.

The organizations attributed the low enrollment to the lack of a fully functioning website.

Jake Bowling, director of advocacy and policy with the Mental Health Association of Southeastern Pennsylvania (MHASP), told Media Trackers his organization has done a lot of important work leading up to enrollment such as educating, creating profiles, and comparing plans, but they have not been able to complete an enrollment on the faulty healthcare.gov.

“People are making important steps but we haven’t been able to complete any enrollments yet,” he told Media Trackers.

This was the image of the day yesterday: 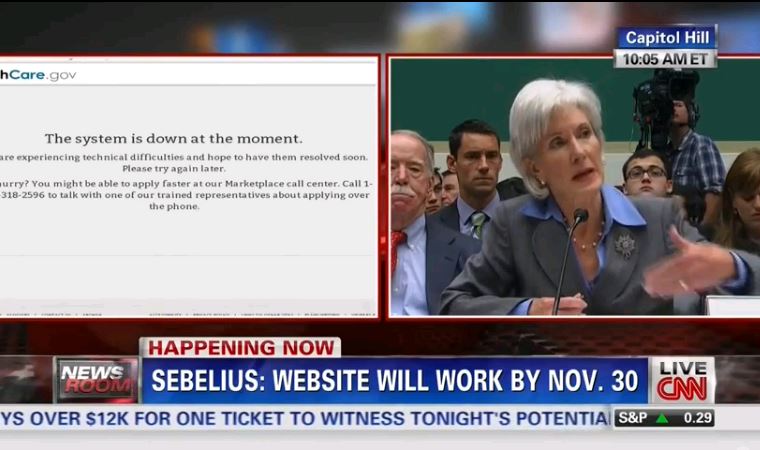 They knew nothing! Umm …

The security of the Obama administration’s healthcare website was at “high risk” because of lack of testing before it opened for enrollment on October 1, according to a government memorandum reviewed by Reuters on Wednesday.

Correctional health care spending in 42 states grew by an average of 52 percent between 2001 and 2008, according to the report by Pew Charitable Trusts that relied on figures from federal Bureau of Justice Statistics, with 2008 the most recent year available.

The researchers listed four ways states could reduce those costs, including Medicaid expansion. Critics of that expansion say states shouldn’t transfer the responsibility for prisoner care onto the federal government.

So Biden is now throwing everyone below him and Obama under the bus, claiming they were misled, Biden: Obama Told Website “All Ready to Go”:

President Obama was told “by the pros” that the website was “all ready to go” before it began operating October 1, according to Vice President Biden.

Given that the website had failed in the limited testing that was done, Biden’s contention amounts to a claim that Obama was misinformed by his staff or contractors about the health of Healthcare.gov. The website crashed almost immediately after going live.

Biden went on to try to further exculpate himself and Obama saying, “Neither he and I are technology geeks.”

Obama Officials In 2010: 93 Million Americans Will Be Unable To Keep Their Health Plans Under #Obamacare http://t.co/kXdEkCBz38 via @forbes

In a bombshell report posted early this morning, Roy links to analysis published in the Federal Register in 2010 that backs up his claim:

“The Departments’ mid-range estimate is that 66 percent of small employer plans and 45 percent of large employer plans will relinquish their grandfather status by the end of 2013,” wrote the administration on page 34552. All in all, more than half of employer-sponsored plans will lose their “grandfather status” and get canceled. According to the Congressional Budget Office, 156 million Americans—more than half the population—was covered by employer-sponsored insurance in 2013.

In other words, the cancellations that heretofore have been limited to the individual market will ultimately spread to the employer market as well. This may explain the administration’s decision to delay the employer mandate by one year.

This video was released yesterday morning by House Republicans:

Someday in the future, everyone will realize what a boondoggle this “Healthcare.gov” really is.

Once you have any experience with a “single payer” healthcare system you don’t want to go back to it. They are really bad at good health care. ( Examples … VA Hospitals, Army TMCs, Walter Reed National Medical Center ).

The UK National Health Service just had a $10 Billion FAIL on IT standardization. Yes, the UK cancelled the project after spending $10 Billion, with no end in sight.

ObamaCare was designed to fail in order to encourage a move to Single Payer. BUT – it was never supposed to fail so soon. Now, it makes people wonder if the Govt can do anything right at all.

Have you read @mflynny’s adventure with the Obamacare health exchange website yet? The storify version is here, and she expands on it in this post at Ace of Spades.

I’ve sent them on to my Congressman (Ron DeSantis), with the query “how many Americans just checking out rates on healthcare.gov have been ‘signed up’ either for exchange insurance or for Medicaid without their knowledge or consent?”

None of this is surprising, but it all is outrageously upsetting.
Will a group arise that will attack obamacare headon, including coming up with a proposal for how to undo the damage and unscramble the eggs if enough elections can be won?
obama and his horde of liars are succeeding in destroying our once great America.

Why don’t all those folks demanding a single payer system go to Cuba to experience the “excellence” of the Cuban health care system?

One thing I’d encourage them to do, though, is take enough money to pay for it because the single payer side comes with little treatment and almost no drugs. If you want to be treated, you’ve got to cough up the big bucks.

‘Biden went on to try to further exculpate himself and Obama saying, “Neither he and I are technology geeks.”’

Nor is either of them literate.

Politico reports “The online website signup procedure is such a disaster that President Barack Obama is urging Americans to go ahead and try to get health coverage by mailing in a paper application, calling the helpline or seeking help from one of the trained “assisters.””

But the truth is those applications — on paper or by phone — have to get entered into the same lousy website that is causing the problems in the first place. And the people processing the paper and calls don’t have any cyber secret passage to duck around that. They too have to deal with all the frustrations of HealthCare.gov — full-time.

“We’re going to do a challenge. I’m going to try and download every movie ever made and you are going to try to sign up for Obamacare — and we’ll see which happens first.” — OFfical Idiot Secretary Kathleen Sebelius Oct. 7