PolitiFact announces it will launch PunditFact

PolitiFact announces it will launch PunditFact 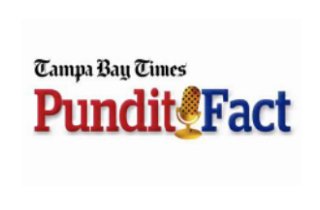 PolitiFact announced yesterday afternoon that it will soon launch PunditFact, a new site aimed at fact-checking pundits and media figures.

PolitiFact, the Pulitzer Prize-winning fact-checking website of the Tampa Bay Times, will soon launch PunditFact, a site dedicated to checking claims by pundits, columnists, bloggers and the hosts and guests of talk shows.

PunditFact is being funded by $625,000 in grants over two years from the Ford Foundation and the Democracy Fund. Seed money for the project was provided by craigconnects, the Web-based initiative to support philanthropy and public service run by Craig Newmark, founder of craigslist.

PunditFact is a partnership of PolitiFact and the Poynter Institute, the journalism school that owns the Tampa Bay Times. Poynter will be analyzing the reach and impact of PunditFact and will hold a conference to discuss the results.

“Pundits on TV and radio, as well as bloggers and columnists, are prominent voices in our political discourse, yet sometimes they blur the lines between opinion and fact,” said Neil Brown, editor and vice president of the Times. “Now we will hold them accountable, much as we’ve done with politicians.”

Well, at least Politifact recognizes (sort of) that bloggers can be prominent voices, rather than just those pesky “just a blogger” ilk.

It should be interesting to see what PunditFact produces, given that Politifact’s claims haven’t been without criticism, as Professor Jacobson has written in several previous posts.  (Setting aside that donors like the Ford Foundation have been friendly to left-wing causes).

But then again, Politifact sometimes gets it right.  And like Prof said, “hey, when it works for us, why not use it.”  I have to say, when they do get it right in instances like the aforementioned, it’s delicious entertainment to watch some of the ensuing freakouts.

“Pundits on TV and radio, as well as bloggers and columnists…sometimes they blur the lines between opinion and fact,” said Neil Brown, editor and vice president of the Times. “Now we will hold them accountable, much as we’ve done with politicians.”

Give me some of what they’re smoking. I’d like an escape from everyday reality, too ~

If the left can use it as a tool, so can we. The tool itself is not (or should not be) aligned to any particular ideology. It just is. It’s how it’s “wielded” that matters.

Unrelatedly, is there a way to disable the auto-play in the video? Or place it below the “fold” so it doesn’t start up again every time I refresh the home page?

I agree “auto-play” is annoying, but it seems that if you watch through the video once, the browser (I presume – speaking for FF, here) recognizes that you’ve already watched it, and it doesn’t afflict you again. At least that’s the case for me 😉

Will Chris Matthews and Piers Morgan have their own pages?

Perfesser, you’ll just have to shame into reporting their facts in an unbiased manner. Repeated exposure and shaming is what it’ll take.

Greg, I agree totally. And I for one, am looking forward to a Great Fisking of their supposed “facts” by the Professor!

Should be mighty good entertainment!

The late Tampa sportscaster always referred to the Times and the Tampa Tribune as “the fishwrap.” He was being too kind.

The late Tampa sportscaster Chris Thomas always referred to the Times and the Tampa Tribune as “the fishwrap.” He was being too kind.

I have to wonder, won’t they be duplicating Media Matters’ efforts in this arena?

We will drive them into a vegetative state from which there is no escape.

ROTFLOL A grant by Ford Foundation? I wouldn’t put to much stock in this. It’s just another stupid way for the libs to hide the truth.

Koch brothers don’t have near the power, or money as the ford foundation, but this should lead the way for them to support a blog-site, with rush, Levin, Hannity, coulter, and others, as contributors, to fact check the fact checkers.
to say the ford foundation, or politico, is left leaning, is like describing Obama as a moderate.

In no time, the lefties will be telling us that our opinions are incorrect and we are not allowed to hold them