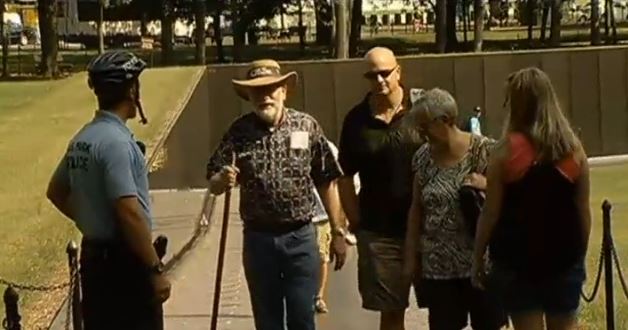 The Washington Examiner reported earlier today that the Park Service will allow an immigration reform rally on the ‘closed’ National Mall in Washington DC tomorrow.

A planned immigration reform rally will take place on the National Mall on Tuesday even though the site is closed due to the government shutdown.

Organizers for the “Camino Americano: March for Immigration Reform” were spotted Monday setting up a stage and equipment on the National Mall for the rally which will take place on Tuesday.

A few scattered barriers around the park have signs informing visitors that the area is closed as a result of the government shutdown.

Susana Flores, a spokesperson for the rally, confirmed for the Washington Examiner that the Park Service will allow the event to take place under the group’s rights granted by the First Amendment.

The report indicated that the rally is being hosted by the Service Employees International Union (SEIU) and AFL-CIO in combination with several immigration activist groups.

As we’ve been reporting here at Legal Insurrection, multiple open air parks and sites have been intentionally closed off to others during the shutdown.

Most notably, visiting veterans who arrived in DC on an Honor Flight trip last week were initially denied access to the World War II Memorial.  Aided by several volunteers and members of Congress however, they pushed past the Barrycades to gain access and get a closer look at their memorial.

(Reason #49 that the hubby is glad we don’t live anywhere that I can cause real trouble easily.)

[…] the government that is somewhat shutdown. It is not really a government shutdown we are witnessing. What we are seeing is an Obama attack against Americans who won’t bow down to totalitarian edicts and corrupt “settled […]

It’s been a few years since con law class but as I recall if they allow one protest they have to allow all of them, right?

Do you think our “constitutional scholar” president even cares? Who would hold him to the rules anyway? The law is whatever Branco Bamma says it is. Welcome to “fundamental transformation.”

Obama must have slept through Property Law when easements were discussed, too. The number of pending lawsuits for denying access to private property is mounting by the hour.

Usually, but as we’ve seen so many times with this administration, illegal aliens have “special” rights under the law that U.S. citizens and legal immigrants don’t have.

All animals are equal, but some are more equal than others.

Equal Justice Under Law. Or, not.

Oh, so the Parks aren’t really closed at all.
It’s just a Private Membership club.

If you have not been following actor James Woods on Twitter, you have been missing out! Really great man. Here is a taste:

Also, he helped to spread the word today about this up coming event: Million Vet March On The Memorials, Oct. 13

This is the longest I have gone without downvoting you.

The ultimate solution is to create a national park that runs along the US border … say 20 yards deep.

The NPS will then replace the border patrol.

Illegal aliens officially have more rights than American citizens. They’ve unofficially had some rights we don’t have for years (e.g. violating traffic laws in places where the local authorities forbid inconveniencing illegals in any way).

Perhaps we should now refer to the National Park Police as Bambi’s Brownshirts. The leadership of the NPS has long had an authoritarian bent that belied its fuzzy image as a bunch of ecological tour guides. I have heard it can be a nasty agency to work for. It is to be hoped that between the Congressional investigations and the lawsuits the NPS culture of entitlement will be permanently changed. They need a big reminder that they don’t own those parks, we do.

These morons stranded a bunch of school kids by blocking the only decent road into a housing development near Smoky Mountain National Park. Obama must have slept through propery law when easements were discussed.

The Obama Administration is a parody of Animal Farm. That’s where all the animals were equal but the pigs were more equal than the others.
Obama takes care of his friends and allies at the expense of everybody else.

Wait, what?? I thought it was supposed to be Washington STATE where all the dope smoking was going on.

And doesn’t every American have that same right? So why should I be barred from the Mall or an open air Memorial just because I am not with some organized group?

I’m beginning to understand why Yogi and Boo-Boo hate the Park Service so much.

Yogi would very much object to those school lunches. And baboon dancing .

With Jellystone closed there won’t be anymore pic inic baskets to raid.

Never fear – a million Veterans march is scheduled to convene in DC and challenge the closure of our War Memorials and parks next Wednesday to challenge the usurped authority of Obama, the Obnoxious.

I hope Obama does not decide to re-enact the Boston Massacre.

I’m curious to see what happens with the truckers’ DC protest on Friday.

So the illegal aliens are using OUR First Amendment rights (as if they are citizens) to converge on the mall with Obama’s blessing, while the WWII vets who fought for those rights are banned from seeing their own memorial??

Obama at his finest.

I hope you liberals know how to speak Spanish and are ready for your kids and grandchildren to have the fights of their lives to maintain any kind of decent standard of living.