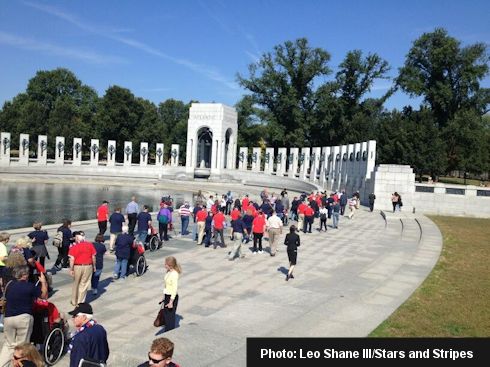 More than 90 veterans arrived in Washington DC today, having embarked upon a visit to the World War II Memorial as part of an Honor Flight, only to be met with barricades erected as part of the government shutdown.

The need for the barricades was questionable:

The Park Service is being used as a political tool today. They're clearly expending more resources to barricade otherwise unmanned parks.

But in the end, this would not deter the men from the Greatest Generation.  They were met at the park by US Representative Steven Palazzo and Senator Roger Wicker of Mississippi and other lawmakers, some of whom decided to move the barricades to let the vets get closer to the memorial.

Honor flight vets just knocked over the barriers at the WWII memorial to get inside, #shutdown or no. pic.twitter.com/T4bx8kvFYj

“These men and women didn’t cower to the Japanese and Germans,” Palazzo said. “I don’t think they’re about to let a few National Park Police stand in their way.”

Palazzo, who was joined by several other members of Congress, moved the barricades at the memorial and police did not try to stop the veterans’ access.

“I’m not going to enforce the ‘no stopping or standing’ sign for a group of 90 World War II veterans,” a U.S. Park Police officer, who declined to give his name, told The Washington Post. “I’m a veteran myself.”

The veterans are traveling as part of Honor Flight, a program that enables World War II veterans to partake in an expense-paid trip to view the memorial. Tuesday’s trip is the second-to-last flight, with the last scheduled for November. But prior to their arrival early Tuesday, there was fear that the government shutdown and federal worker furloughs would mean no access to the monuments on the National Mall.

But with lawmakers leading the charge, the American military heroes, some in wheelchairs, surged into the memorial.

“It’s better to ask for forgiveness than permission,” Palazzo said. “We lined the veterans up along the  blockade, we saw an opening and we took it.”

Republicans meanwhile have proposed piecemeal legislation aimed at keeping some of the national parks open in the wake of the shutdown.  As The Hill noted, the strategy mirrors suggestions made by Senator Ted Cruz.

“We should fund national parks and keep them open right now, today,” Cruz told reporters Tuesday. “And we saw yesterday, that can happen quickly. It doesn’t take weeks or even days, within hours, if Congress wants to, we can fund every single one of the priorities the president laid out yesterday, we can fund clean CRs if Harry Reid and the Democrats don’t object. That is what I hope we will do.”

But several White House spokespeople called that idea “not serious,” and the proposals have already been rejected, according to The Hill.

“President Obama and Senator Harry Reid would rather shut down the government than engage in talks to end special treatment for the well connected under ObamaCare,” a House GOP leadership aide said. “Closed parks and delayed veterans benefits can be easily remedied and allow us to remain focused on forcing the Senate to finally come to the table and talk with us.”

Senate Democrats and President Obama rejected the proposals, with a spokesman for Obama saying he would veto the measures if they reached his desk.

“These piecemeal efforts are not serious, and they are no way to run a government,” White House spokeswoman Amy Brundage said.

GOP targeted funding bills. RT @markknoller: "If these bills were to come to the President’s desk he would veto them," says @Brundage44.

Republicans have offered several compromises in recent days in order to try and pass a Continuing Resolution after the first proposal that included the defunding of Obamacare was voted down in the Senate. Subsequent proposals did away with defunding Obamacare but ranged from repealing the medical device tax to delaying the individual mandate in the health care law.  All have been roundly rejected by Democrats.

Update by WAJ: Ace has to story of how the barricades were all a set up for a photo op: Obama Adminstration Specifically Denied Exception to Permit Veterans to Attend WWII Memorial

When are the Republicans going to go out and start publicly calling President Obama a HYPOCRITE? He’s out there saying “well, if they don’t get 100% of what they want, they’re shutting the government down.”

Hey, Barry Soetoro (aka Barack Hussein Obama), you might want to go and look in the mirror. You’re doing what you’re accusing the opposition of having done(yet again).

In the old days, you know, the ones before Harry and his Senate Dems abandoned their legal requirement to produce a budget, the Feds weren’t funded by a unitary CR Band-Aid. It was a series of a dozen appropriations bills that came to the President in September. e.g. “funding of individual agencies”. How soon we forget….

We have a President who is demanding total obedience from the House of Representatives. Has anyone in his administration let him know that just doesn’t happen in a republic?

Yep. You take what you are owed by the dickless punks in DC if they try to bar you.

While I completely agree that it would be pointless and silly to cite Vets for visiting a War Memorial, it does highlight the problem of:

Equal Enforcement of the Law.

Do Park officers now get to pick and choose what laws they enforce?

Or only those which won’t result in a civil liberties lawsuit for enforcing?

Open the memorial, or spend more money to make it look closed with stupid barricades. Obama wanted his photo op showing those mean Republican terrorists were keeping the old veterans out.

No Barry … those are your orders, to make the people feel the pain, while being confident your media will claim Republicans are to blame for your sabotage.

Those poor Vets first had to fight the Fascists in WWII.

Now they have to fight those American Fascists in DC, known as Democrats…….?

Sometimes the Democrats prefer a scalpel, while other times they prefers a hatchet. It seems that Obamacare is a hatchet job.

…a hatchet job with Death Panels!

Obama and the Democrat Senators are getting sucked in deeper and deeper.

They don’t even know what is happening.

General Sun Tzu: All men can see these tactics whereby I conquer, but what none can see is the strategy out of which victory is evolved.

Perhaps the time has come for all veterans to storm the white house and eject the cabal of Chicago thugs that occupy it.

I’ll be standing by should the call come…

“Once more unto the breach, dear friends, once more;
Or close the wall up with our English dead!
In peace there’s nothing so becomes a man
As modest stillness and humility:
But when the blast of war blows in our ears,
Then imitate the action of the tiger.”

“The summer soldier and the sunshine patriot will, in this crisis, shrink from the service of their country; but he that stands by it now, deserves the love and thanks of man and woman.” Thomas Payne

Mr. President, you got served by a bunch of 90 year olds in wheelchairs and walkers!

This is the perfect time for mass civil disobedience. Everybody should be swarming all these places.

A number of Country’s in the Past have tried to destroy our great Nation. Their attempt’s have all-ways failed, and our Government has become every tired of this. SO!!! in holding to our standards, they are showing the rest of the World, HOW it is suppose to be done. Welcome to, ” Wipe-Out 101″

High time the House GOP stop offering bills and start talking loudly to Americans about what they have proposed and what Obama and the Democrats have rejected. Hold a series of national meetings at these prominent places that have been shut down, encourage civil disobedience by mounting a protest themselves, let their protest be videotaped and put on YouTube. If the LSM won’t out you on the air, make your own. Call for the people to rise up against the tyrants of the Dmocrat party.

[…] first heard the term Barrycade at Legal Insurrection and […]