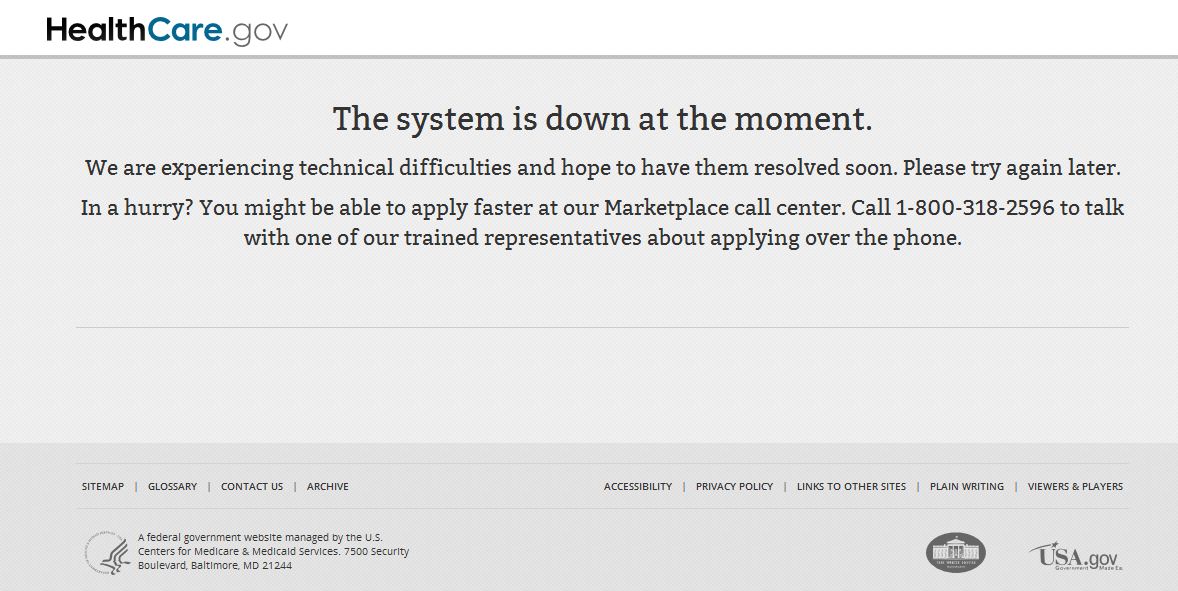 This upcoming week is going to be an interesting one, as more hearings are scheduled on the Hill to address the troubled rollout of the Obamacare website.

Republicans said Sunday they intend to press Health and Human Services Secretary Kathleen Sebelius on the Obama administration’s troubled launch of healthcare.gov, the online portal to buy insurance, and concerns about the privacy of information that applicants submit under the new system.

The Obama administration will face intense pressure next week to be more forthcoming about how many people have actually succeeded in enrolling for coverage in the new insurance markets. Medicare chief Marilyn Tavenner is to testify during a House hearing on Tuesday, followed Wednesday by Sebelius before the House Energy and Commerce Committee. The officials will also be grilled on how such crippling technical problems could have gone undetected prior to the website’s Oct. 1 launch.

“The incompetence in building this website is staggering,” said Rep. Marsha Blackburn, R-Tenn., the second ranking Republican on the panel and an opponent of the law.

Democratic Senator Jeanee Shaheen of New Hampshire, a supporter of the Affordable Care Act, told Face the Nation on Sunday that “The rollout has been a disaster,” and proposed that the enrollment period be extended beyond the March 31st deadline. (h/t Washington Free Beacon)

Indeed, other Senate Democrats have joined Shaheen in support of such a proposal.

Democratic Senator Joe Manchin of West Virginia has also joined with Republicans in calling for a one-year delay of the individual mandate.

Unrelated to the technical problems with the healthcare.gov website, the administration announced last week that it would extend the deadline by six weeks after realizing that enrollees would actually have to purchase coverage several weeks before March 31st in order for the coverage to be in effect by that deadline.

We’re also learning, via CNN, that the numbers of those signing up for plans may not be what they seem.

Kathleen Sebelius meanwhile seems to remain somewhat tone deaf to the criticism, and continues to try and focus on any positive detail.

In an upbeat blog post on Saturday, Sebelius released statistics to illustrate the volume of interest in the Affordable Care Act, or Obamacare, and the speed of the “data hub,” one piece of the complex system behind HealthCare.gov.

Sebelius praised the performance of the data hub, which connects to the Social Security Administration and Internal Revenue Service to verify applicants’ identity and income.

She said it took the hub less than 1.2 seconds to route information, and called it “a model of efficiency and security.”

By the way, Representative Mike Rogers of Michigan, also the Republican head of the House Intelligence Committee, had a few words this weekend about the site’s security.

Even Saturday Night Live gets it.

It’s been almost a month since the Grand Opening. They’re all on the inside looking out, waving gloriously at the curious window shoppers outside wondering what exactly is for sale in there. They’re proud and eager to describe the wonderful products they would have created were it not for those bastard Republicans, beckoning the peasants to come forth, hot to profile exactly what SMART POWER moving FORWARD means for their soon-to-be adoring fans – but the dumbasses don’t realize it’s one-way glass and all the doors are locked.

Kathleen Sebelius – OBOZO’s SECOND TAX CHEAT candidate for HHS secretary – used undocumented, phony deductions to cheat the federal government out of more than $7000 over three years. She LIED repeatedly to the IRS!!! Do you actually expect she’ll tell the truth to the American people or even congress (which has little relation to the American people) ?????

Q: When is a lunatic-left d-cat socialist telling lies about their plan to enact government-controlled, nationalized, limited and rationed American healthcare?
A: Whenever they’re talking about it.

Sebelius: an unethical, lying, incompetent reprobate d-cRAT socialist TAX CHEAT. But then, aren’t they all?

NB: “tough questions” WILL NOT FIX THE OBOZOCARE ATROCITY.

Actually, in Obama’s mind, the ACA rollout might have a few glitches but is otherwise working the way he wants it to work. Remember, all you “naysayers” out there, and that does include me, the ACA is part of Obama’s plan to radically transform this country, and afterwards, the world.

Yep, the ACA seems like it’s just throwing more money down the rat hole and to Obama, that’s more an effect than a problem. The ACA along with Reid’s continuing resolutions are just part of Obama’s plan to weigh down our country with unmanageable debt and his plan is working well. When Obama realized that health care constituted 1/6th of our economy, his plans for the ACA were born.

Of course, otherwise, Obama couldn’t plan his way out of a two line maze!

Lastly, in Obama’s own words, whatever he said on the campaign trail were just words. Plus, Pelosi confirmed that during the runup to the ACA when she said that campaign promises are just mere words; don’t believe anything they say!

I hope some Republicans will ask them if their purpose was to throw people off the affordable insurance they wanted to keep and leave options that are all more expensive and lower in quality.

And, if that was not their purpose, do they have any regrets about causing that result?

And, if that was their purpose, why didn’t they point out that Obama was lying brazenly about what they were doing?

And, if that was their purpose, do they think it’s a decent way to treat tax-paying citizens of a formerly free country?

And, how can they look themselves in the mirror knowing that they are hurting more people than they’re helping?

Apologies in advance to a warrior of the 20th Century.

What happens if kathleen Seabiscuit pleads the 5th?

I’m sure our congressmen absolutely love these dog-and-pony-show hearings. They get to strut and preen and act all outraged in front of the cameras which is a lot safer than actually doing something to stop Obamacare.

Will they do anything about it?