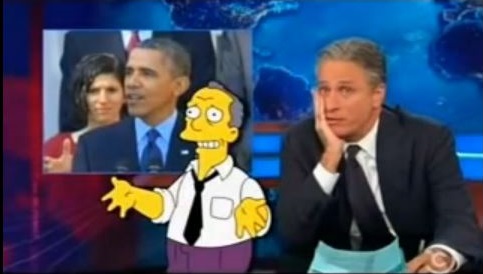 The launch of healthcare.gov, the Obamacare website, continues to be extremely unpopular due to glitches and long wait times. According to Pew Research, only three-in-ten Americans responded favorably to its launch.

The glitches are even turning-off many liberals.

During the week following the failed launch of the Obamacare website, Obama defended the policy and went after Republican critics in his weekly address. But even liberals are not buying the president’s hyper-positive rhetoric.

On Jon Stewart’s “The Daily Show,” Stewart compares clips of Obama speaking at a press conference to the character of Gill, a desperate and unsuccessful salesman from “The Simpsons”.

The clips, which are from 5:02- 5:25, reveal Obama enthusiastically proclaiming things like, “the health insurance that is available to people is working just fine,” “The product is good,” and “I want people to be able to get this great product; and that product is working, it’s really good!”

On a damage control mission in San Antonio, Health and Human Services Secretary Kathleen Sebelius said she will not resign despite unpopularity of the Obamacare website. Sebelius defended herself and the Obamacare website by saying that the critics “really aren’t unhappy with the website, they don’t like the law at all.” At another damage control appearance, she went on to say that:

“The majority of people calling for me to resign, I would say, are people who I don’t work for, and do not want this program to work in the first place.”

In a press briefing on October 23, White House press secretary Jay Carney defended Obamacare by stressing that it is not the same thing as its website:

On NBC’s Meet the Press, Democrat Governor Steve Beshear of Kentucky stressed that the policy “is going to work.” He also said:

“Look, this is going to take some time to get done, but everybody needs to chill out because it is going to work.”

When asked about the Obamacare site’s launch disaster, and why Health and Human Services Secretary Kathleen Sebelius can not reveal the number of people able to successful register for Obamacare, Schultz rambeled:

“HHS has acknowledged that there has obviously been some technological problems with the server, but the good news out of that, is that the server’s were designed to anticipate about 50,000 people a day going on the website and moving around, and it turns out that there has been about 250,000 people. So it is very clear there is demand.”

She then went on to make the *Republicans are burning down their house because they don’t like the kitchen re-design* analogy. Again.

-From The Dept. of Supreme Knowledge, Altruism and Healthcare Imperialism.

This statement is revealing of Sebelius character and sense of loyalty/responsibility to the American people:

“The majority of people calling for me to resign, I would say, are people who I don’t work for, and do not want this program to work in the first place.”

Why not just say “I only work for the people who agree with me, support me and what I’m doing …”

People who disagree, have no standing.

Where these assholes got the idea that they represent only those who voted for them or who agrees with them, I don’t know.

It is for that reason, I’ve wished for a return to constitutional elections, whereby every voter gets 2 votes during presidential elections. One for president, the other for vice president. These DNC/RNC paired tickets effectively rob the people of 1 vote each and ensure a 1 party lock on the Whitehouse.

Imagine if Obama and Romney had both been elected; one president, another VP, driven by the vote of the people? The majority of voters would have a representative in the white house. The VP would cease to be irrelevant.

Unfortunately, the ‘separate vote’ for president and vice president, is carried out only in the electoral college. But if history is any indicator of the framers intent, they wanted everyone to have a representative in the Whitehouse.

The way the DNC/RNC do it now ensures that the Whitehouse is occupied by minority interests in that only the winner of a 3+ way race (Dem, Rep, Lib, independents) is elected. Such also prevents the rise of a viable 3rd party.

As the 12th amendment says:

Of course, the 12th amendment speaks to a number of appointed electors, not the poll (election) by the people.

I’d love to see that changed, to drive the 2 vote concept down to the people, and as long as I’m tinkering, to require the Senate to be fixed at 50 D and 50 R’s so the bastards have to cooperate to get anything done.

“The majority of people calling for me to resign, I would say, are people who I don’t work for, and do not want this program to work in the first place.” So, the only people who want her to resign are illegal aliens who don’t pay taxes? Because the last time I looked she was working for the American taxpayer.

RE: The Al Gore reference by DWS.

The SCOTUS voted 7 to 2 that the Florida Supreme Court was in error and then 5 to 4 not to give them a third try at rewriting election laws.

Almost immediately, major media sent their people to Florida to do a recount, hoping to undermine Bush as president. The little published results were that Bush won the media recount.

RE: the concentration on the glitches

The Democrats should be thankful that the web problems are taking attention away from middle class reaction to the product they are being forced to buy and its cost. A new talking point this weekend was the fact that costs are going up but down for those eligible for subsidizes. No mention is made about where the money is coming to pay for those subsidizes. Some from taxes on insurance companies and some from taxes on medical devices manufacturers. These are already built into the insurance premiums. The rest will coming from general revenue which means will add to the deficit.

Another big Obama lie: No new taxes for the middle class.

Sorry, Democrats, these are the good old days. Take heart in the advice of Virgil: Forsan et haec olim meminisse iuvabit – Perhaps someday we will look back upon these things with joy.

Yet, If it hadn’t been for the ongoing epic failure of healthcare.guv—ObamaCare—we may have missed the long road of computer scandals that seems to now serve as the government’s way to feed mega money to their friends and supporters.

Indeed, the ObamaCare website failure may unwittingly end up blowing the whistle on one of the biggest government slush fund set ups in latter day history because the runaway costs on healthcare.gov uncovers a long trajectory of failed multi-million dollar government websites that point to coincidences way too many.

CGI, the Canadian company that launched healthcare.gov, is peopled with friends of the Obamas, including Michelle Obama’s Princeton school chum, Toni Townes-Whitley. CGI is not just the company behind the healthcare.gov epic fail. CGI is also the company behind the $2.7-billion failed, Liberal-launched Canadian Gun Registry that was so plagued with corruption and mismanagement it brought on an investigation by Canadian Auditor General Sheila Fraser.

Government website glitches can make for perfect stall tactics allowing timelines for election-bound politicians to get past elections like the upcoming 2014 midterms.

Healthcare.gov—Jeff Zeints-guaranteed as “good to go” by the end of November 2013—can rely on a company that could have already proven itself “too big to not fail”.

Right on target, I am afraid.

And I doubt this is the first time (or the last), that a software developer buys time by presenting an empty interface instead of the finished product. It would probably be, however, the first time this is done with the knowledge and consent of the paying client/party.

Neo, thanks for sharing. Quite a damning article.