Posted by William A. Jacobson Wednesday, October 2, 2013 at 08:49am 26 Comments
More Sharing Options

Morgen Richmond, of the former Verum Serum blog, has been doing great research on the closure of parks and monuments in Washington, D.C. by Obama and the Democrats, revealing rank hypocrisy and mean-spiritedness.

For example, The White House now claims that it needed to erect barricades at the WWII Memorial to keep out vistors, including a group of visiting WWII veterans, because parks service personnel know how to perform CPR.  (Seriously, that’s the claim.)

But Morgen demonstrated that the WWII memorial is open 24 hours a day, but only staffed part of the day, which means that for much of the time it’s open there are no parks service personnel there at all.  Such much for the bogus CPR defense.

Obama and the Democrats also have shut the Lincoln Memorial, erecting more Barry-cades. 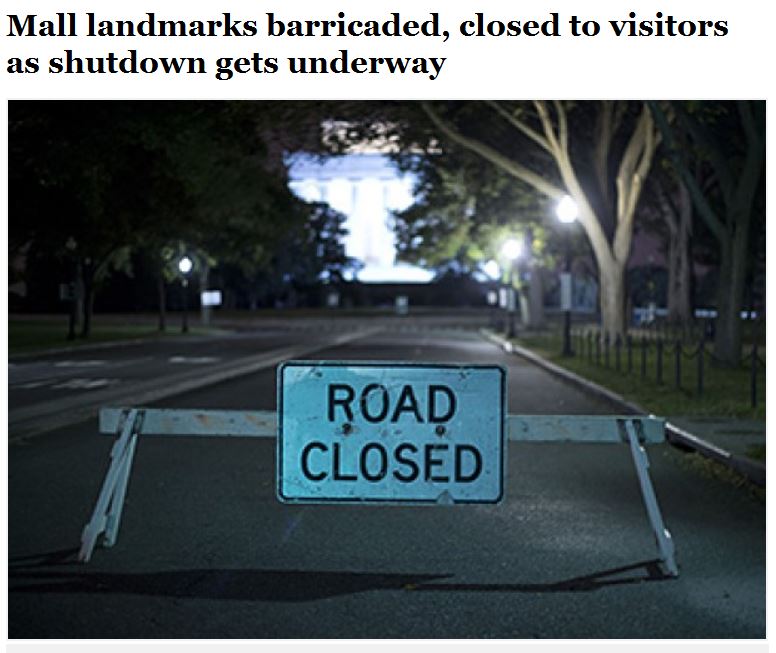 But Morgen did some research, and the Lincoln Memorial was open during the 1995 “shutdown”: 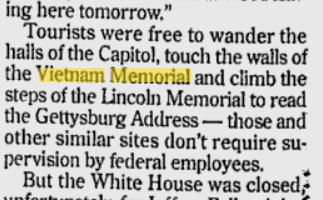 Photo of Lincoln Memorial during '95 shutdown. Info booth is closed but tourists had access to grounds.http://t.co/e8g7pR35kH 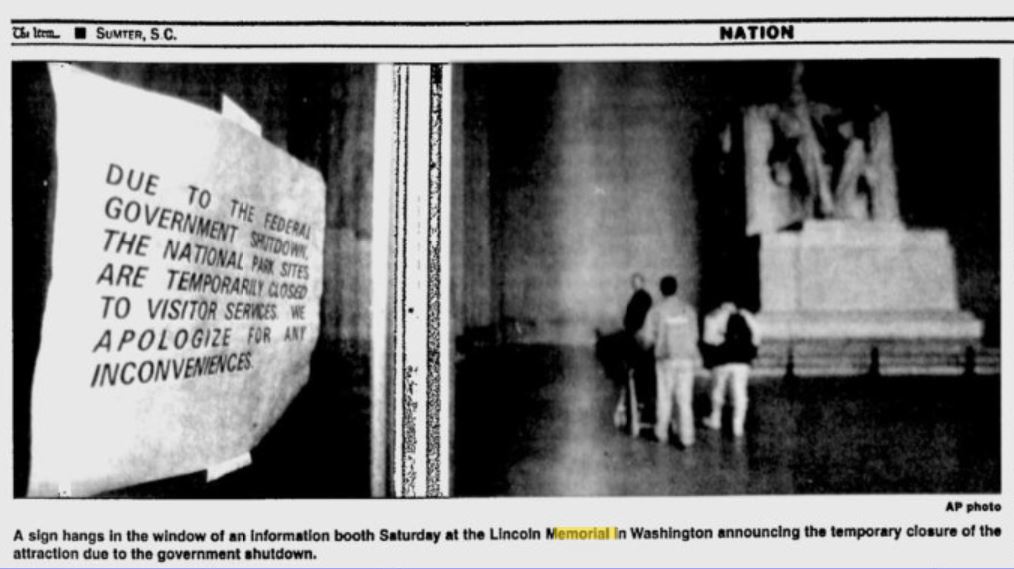 The Barry-cades should be the symbol of this “shutdown” — political opportunism by Obama and the Democrats in Congress who create unnecessary photo-ops, even if it means ambushing visiting WWII veterans and ordinary citizens in order to protect special Obamacare privileges enjoyed by members of Congress.

Update: Someone from The Week found a photo from 1995 showing police shutting off the Lincoln Memorial at the bottom of one portion of the steps, but as the photo above shows (from the same series of photos) people still had access and there is no fencing in sight. (added) Also, this afternoon Morgen found a December 1995 1995 article regarding the second shutdown that year referring to the Lincoln Memorial having been “locked up,” but obviously that’s not physically possible, it’s unclear to what they were referring.

Nothing is gained by this “shutdown” except to punish the public. The employees who were furloughed will eventually receive all of their salaries so this “shutdown” is essentially a paid holiday. Since they eventually would receive their pay, these employees are still working and should not prevent the public from enjoying what their taxes have provided.

I imagine this isn’t really a surprise for anyone who has been paying attention to this guy Barry Soetero. He behaves like an insolent child.

The obvious asshattery of this move is that it clearly takes more people/time to erect all these barriers than it does to staff these sites normally.

This is nothing but the petulant thrashings of a spoiled brat who needs to have his little butt spanked. Oh wait… Vladimir Putin and the mullahs already did that.

The more National Parks are shut down, the easier it will be for them to be targets for terrorist activity…

Examiner Editorial: Only you can prevent terrorists from starting forest fires

The Strata-Sphere » Public Lands Do Not Belong To The Political Party In The White House | October 2, 2013 at 9:58 am

If Obama could withhold oxygen, he would.

No, it’s the impulse of a fascist.

So now the question is, what are we going to do about it?

If all of these Park Police are on furlough, then how does the administration plan on handling it when law-abiding citizens decide enough is enough and they crash the barricades?

If there’s nobody there to arrest them…..

And just how many personnel ARE still there? I guarantee you they don’t have enough bullets in their guns to subdue a large crowd (and I’m betting their ROE are even stricter than those of active-duty soldiers).

Obama might want to think long and hard about the optics of Park Police arresting a bunch of nonegenarians who gave their blood, sweat, and tears to keep the world free all those years ago.

Especially if he doesn’t want to be compared to Hitler…..

Is it time to roll out Occupy National Parks?

This is the time of year when the thru hikers who started the Appalachian Trail at Mt. Katahdin in Maine are in the Smoky Mountains on their way to Mt. Springer in Georgia. They didn’t close US 441 through the park but I read that every other road and trailin Smoky Mountain National Park is now closed. Most of the AT is not in federal park land. The AT thru hikers didn’t need federal nannies to look after them on the first four months of their hike. So why close the trails.

There are NO Barrycades at the Gateway Arch in St. Louis. Even though the interior of the monument is shut, you can still walk up to it. Guess STL is too far off the beaten media path?

yeah Dave, that’s just ‘fly over country’, and the state of misery to boot (sorry, illinois native, had to throw that in there).

[…] exit question via Legal Insurrection while we wait for updates: How come the Lincoln Memorial isn’t open now when it was open […]

You know, I’m beginning to think these closures are arbitrary, a political move, intended to anger citizens who will be led to blame Republicans, specifically conservatives. Naw, that’s crazy talk.

Lord how I wish I could be in DC right now.

I’d dearly love to ask that guy ‘guarding’ the Lincoln Memorial what it feels like to be ‘just following orders?’

They think their offices mean they own our public spaces.

A petulant and hateful Obama just wants to lash out and hurt people.
Progressives in charge are very dangerous people.

Progressives are always regressive. Ever notice that?

[…] Legal Insurrection points out, the same site was open to visitors during the last government shutdown in the 1990s. In those […]

[…] Legal Insurrection points out, the same site was open to visitors during the last government shutdown in the 1990s. In those […]

[…] They’ve even even barricaded the Lincoln Memorial, again unlike the 1995 government shutdown where tourists could still walk up to it. […]

The photo with the police officer in front of the barricades does not reflect the actual situation at the time. The “area closed” signs and barricades were there because of a long term refurbishment project.

http://web.archive.org/web/20021018215633/http://www.nps.gov/ncro/PublicAffairs/LincolnMuralRestoration.htm
You would think that it would be obvious from the wall constructed in the background similar to many large scale construction sites.
Funny how you have to pull this from Internet archive because of the current partial shutdown. It costs nothing more to put up a page saying the site is offline than to just leave the site online in a frozen state. Somehow the whitehouse.gov site is still online and updated.