You probably know how the Obama administration erected barricades at the WWII memorial but a group of WWII veterans burst through the barricades anyway.

The barricades were political theater.

Before we go any further, let us note once again how contrived it is to shut down entryways to a wide open space out in the middle of a park.

This is not a building, like a museum, that has doors and staffers and guides. This is fucking scenery.

And yet the erected artificial barriers to block people from walking through outdoor scenery.

Voila! Now we can pretend a memorial standing unsupervised out in the open is a “National Park” or “Open Air Museum” and close it to pedestrian traffic (and people can in fact just walk through this thing in their normal transversing of the city).

Now, that out of the way: They then took the next step.

When they were informed that the Honor Flight was on the way, and that they should make one exception for the veterans of WWII and open up the artificial barriers they had erected to make a political point, they refused.

The Daily Caller has further details on how the WWII Vets were ambushed by the Obama administration, Obama admin. knew about WWII veterans’ request and rejected it:

Palazzo, a Gulf War Marine veteran who has participated in all five of the Honor Flights, blames the White House for making it harder on veterans and playing politics. “At first I thought it was a huge bureaucratic oversight,” Palazzo told The Daily Caller, “but having talked with the officials I can’t help but think this was politically motivated. Honor Flights, which bring WWII veterans to the nation’s memorials, are planned a year in advance and cost anywhere between $80,000 to $100,000. How low can you get with playing politics over our nation’s veterans?”

In a statement, Palazzo noted that he is introducing legislation to ensure that all Honor Flights are granted access this week. “This is an open-air memorial that the public has 24/7 access to under normal circumstances — even when Park Service personnel aren’t present,” Palazzo said in the statement. “It actually requires more effort and expense to shut out these veterans from their Memorial than it would to simply let them through. My office has been in touch with NPS officials and the Administration to try to resolve this issue.”

Morgan Richmond, formerly of Verum Serum blog, demonstrates that the memorial is open 24 hours. There are no barricades or gates. There was no reason to close it off other than to hassle the Vets and create a propaganda image to blame Republicans.

But it gets worse. Not only did the Obama administration abuse these WWII Veterans by erecting needless barricades, Democrats in the House killed a bill to fund the Veterans Administration.

A two-thirds majority was needed on this procedural vote, and it failed because almost all Democrats voted against it.

Here’s the breakdown of the vote by party:

Here are the NAYS (all Democrats)(click on image to enlarge): 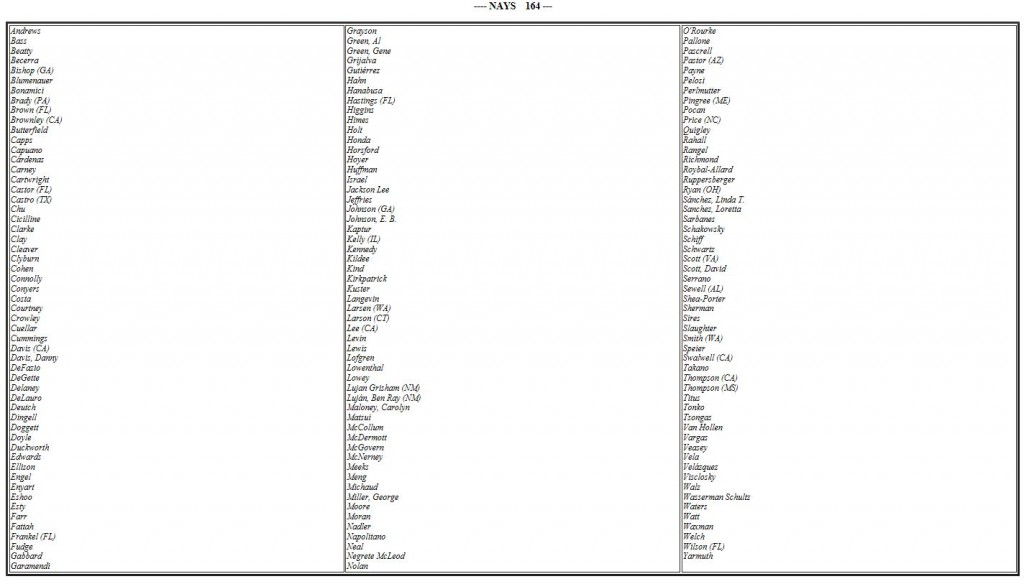 Democrats are so enthralled with what they perceive to be a political advantage, that they are willing needlessly to ambush a group of WWII Vets visiting a memorial to their fallen comrades, and then to deny the Veterans Administration funding.

John Ekdahl has it right:

The man is, at his core, vindictive and small. http://t.co/At66djahYo

Obama and Dems declare political war on Veterans, AND FOOTBALL!

The Department of Defense released a statement early Tuesday that shocked college sports fans. The department said that all athletic competitions at the Army, Navy and Air Force academies would be postponed for as long as the government remained closed.

“The Air Force and Navy are scheduled to square off in a sold-out, nationally televised football game on Saturday, while the Army has a planned match-up against Boston College. If the government impasse isn’t resolved by Thursday, both games will be suspended.

Sen. John McCain (R-Ariz.), a graduate of the Naval Academy, told reporters that the cancelation of the Air Force-Navy game would be the “defining moment” of the shutdown.
“The apocalypse is upon us,” McCain lamented.”

Beginning to believe that the only kinda’ “military” Barry and the Dems like, have the initials A.Q.

Don’t begin to believe it. Believe it. They are doing everything they can to support A.Q.

The Dems are just quite confident that the MSM will spin and cover for them.
Why shouldn’t they keep pushing?

[…] Have you heard about the WWII vets who stormed the Barry-Cades in Washington, DC today? […]

Vindictive, and small? A few more choice adjectives could be thrown his way as well.

He is without a doubt the WORST President I have ever had the displeasure to know in my lifetime.

The Democrats should be horse whipped.

William, I got you linked up: “VIDEO: Veterans Visit World War II Memorial Despite Shutdown.”

I was trying to say the Democrats should be worshiped.

I tfirst thought this comment said “the dome rates should be worshiped.

I’d follow that up with hot tar, feathers and a rail.

Since we are kind people and just joking (I mean we would never shut down an open-air public space by spending tens of thousands of dollars to do it just to torture 90 to 100 year old people…………) how about a big branding iron that spells out the word “T R A I T O R” uh?

Snark Snark – for the humor impaired.

Just when I think I couldn’t despise Obama and the Dems more, they find new ways to be still more contemptible.

The majority of Democrats have gone MAD (mutually assured destruction). Neither granny’s retirement nor children’s lunches are safe in this cold war revival.

Y’all have it a bit wrong. Obama and the Democrats have declared war on America and Americans.

These vets have faced pure evil square in the eye and won. Dealing with a piss ant thug like Obama is like flicking a booger.

Love how this back fired on Barry.

My father-in-law was able to get tickets to the opening of the WWII memorial in 2004. He wore his Purple Heart and had sewn his 5th Ranger Division patch onto his shirt sleeve. It was Memorial Day weekend and hot as blazes in DC. He’s 87 now and he wouldn’t be able to make the trip even if someone else paid for him—it would absolutely exhaust him. Making these veterans pawns in a game of political brinksmanship is unconscionable.

However, he voted for Obama…twice, so there you go.

Where are the Republicans on this? Cruz, Paul, Palin? Come on, let’s go!

You know, this may be a silly question to ask and not really what this thread is about, but I would like to know why do those who spat on our troops in the past calling them “baby killers” support abortion in Obamacare today with such ferocity?

An article dated Sept 30th shows the lengths the administration went to in order to block the vets from visiting the memorial:

“The National Park Service confirmed that the World War II Memorial on the Washington Mall would be barricaded in the event of a government shutdown. An area for passenger buses will be blocked off, restrooms will be closed and the water will be turned off.

Spokesperson Carol Johnson tells me park police will be on duty to make sure no one enters the outdoor plaza.

“These are national security icons,” she said. “They will be on duty to protect the monuments and the memorials.”

They knew the vets were coming and they spent quite a bit of time and resources to block them from gaining access.

If they all donned burkhas, they’d roll out the red carpet.

I have a friend who was a Green Beret officer who was in and out of Iraq and Afghanistan several times over the past several years.

He does not talk (can’t really) much about what he did but he did tell me that the single thing that he did that required the most courage and was the most difficult to do during his 20+ years in and out of combat was saluting this Commander in Chief.

I’m sure those guys were scared poopless of the park service. Heck, some of those guys fought in WWII, Korea and Vietnam.

I suspect it’s just beginning to dawn on our dear leader, Barry, that he’s making a big tactical mistake in his refusal to negotiate.

And this ham-handed attack on the WWII veterans in wheelchairs is going viral, despite the best efforts of those MSM suck-ups to keep it out of the news.

Plus the “rollout” of Obamacare — with the Mother of all GLITCHES — was so bad today that Barry will soon be begging the R’s for a 6 month “extension” of Obamamcare.

I’m loving it, Barry — it couldn’t happen to a nastier, more unpatriotic human being.

So Tammy Duckworth voted against funding the VA. Check out her “get to know her” campaign video and compare it to her actions today.

This is now a public relations and information battle. Republicans need to put some ads out.

The longer this goes on, though, may be surprising just how long a shut down can go and how resourceful people can be without the feds. The House needs to keep passing funding for essential services.

It sounds to me like we need to organize operation Occupy Public Parks.

They are threatening to arrest the next Honor Flight. That is ridiculous. There is no need to close off areas that are regularly open 24/7/365 and which do not involve much in the way of security or maintenance. Near me hikers who started the Appalachian Trail at Mt.Katahdin in Maine and are on the last leg of their journey ow find that the trail through Smoky Mountain National Park is closed. Why? If they walked that far without a park ranger at their beck and call, I say let them pass.

Why? Because this administration is doing everything it can to make the shutdown hurt the public while protecting their cronies.

Very presidential, wouldn’t you say? What a man. (spit)

“Just last year these 80+ year old thugs, who call themselves veterans, left wheelchair skid marks doing wheelies. One thug tagged a memorial with a dab of denture cream as his false teeth fell out when overcome by grief. It took four park employees (unionized) three hours to clean it off! One veteran almost marred a monument when his cane slipped and he fell into it. The disrespect shown by this group was awful – so protect we must!”

If they will go to these insane measures and block and entrance to a park just to get their way politically, it’s going to be awesome when they exploit our healthcare as a political football to exert their will.

Drudge now reporting that our hero vets are being threatened with arrest.