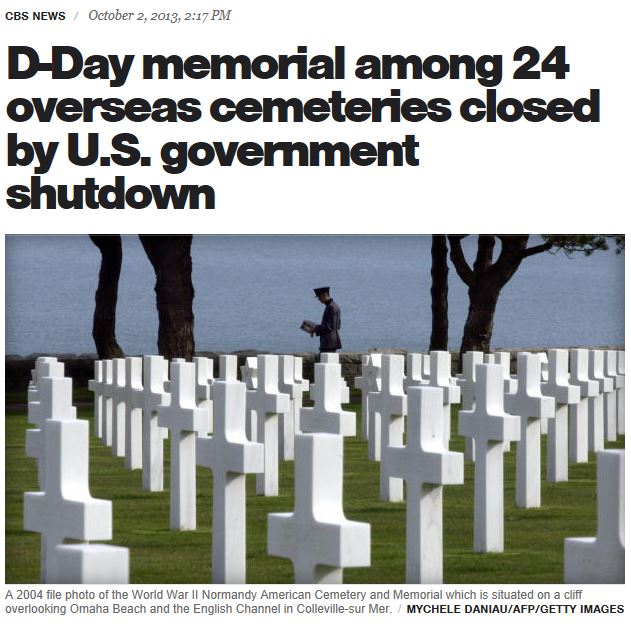 It appears that Obama and the Democrats will leave the WWII Memorial in its natural open status, and drop the barrycades, after the negative publicity.

That said, the Senate is likely to kill the House funding bill passed yesterday to reopen various Parks Service monuments along with the Smithsonian and Holocaust Museum.  The NIH funding almost certaily also will be killed by Senate Democrats and Obama,  even as Democrats accuse Republicans of denying cancer treatment to children because of lack of funding.

Here’s another funding bill the House should pass promptly, overseas military cemetaries, which have closed allegedly due to lack of funding for the American Battle Monument Commission:

It’s hard to know if battle monuments and cemeteries really needed to be shut, or it’s just another barrycade game.

Regardless, the House should fund overseas military cemetaries like the Normandy memorial (h/t myiq2xu):

Let Democrats be the ones to deny funding for the other Private Ryans who wish to visit their fallen comrades:

At least the golf courses where Odumbo traditionally plays are still open ….

Now military cemeteries, even overseas? Are there barrycades at Normandy? I was wondering what could be more egregious than the WWII Monument, that is an open space, or Mount Vernon, etc… Just outrageously pitiful. Does anyone have a photo of what Arlington Cemetery looks like today? Is it barrycaded and manned by guards prohibiting the family and friends to enter too? I’m not sure that any of this crap is even lawful.

I took a look, Arlington Cemetery is open to visitors, reduced staff. I guess The Machine has its limits. (sarc) They will only close veterans cemeteries that are overseas.

But not so good for Mount Rushmore:

“Because of the federal government shutdown, all national parks are closed and National Park Service webpages are not operating. For more information, go to http://www.doi.gov.”

So they actually “closed” a mountain? Wow!

Asininities of the Human Kind

“Caution: Cigarette Smoking Idiocy May be Hazardous to Your Health”

So, are they going to drop blankets over Mt. Rushmore next lest anyone see them from afar and assume the government is open for business?

If these “parks” are closed because the Parks Service can’t man them because they are “non-essntial”, but can man the shutdown of the Parks, it’s a clear violation of the Law.

Walker tells them to pound sand-

I read your article, thanks for the link.

Funny, another “open” and presumably unmanned federal park space, tiny remote islands, that citizens can no longer set foot upon:

“He can get visitors close to the islands for sightseeing; he just can’t put them on the islands.”

Walker has a Republican congress so he can do what he likes in his state, and I am impressed with his decisions regarding this issue. Not impressed with him grandstanding, lying about working across the isle, and him blaming both parties for the shutdown – but he is a politician.

Reading about the Fed’s take on this and their heavy handed actions that are all encompassing in Wisconsin, frankly it is shocking and disgusting. It makes me look back on Nixon and wonder if what he did was that bad, what about… Never mind.

In a sane world:

In this crazy Obama admin world:

They are still non-negotiable … but in the wrong way.

As for this kind of administration, let us say, “Never again.”

Citizens in large numbers should attack the open air sites and liberate them. This administration needs to be sent a message that the country is ours not theirs. The police would be hard pressed to jail hundreds or thousands.

[…] Legal Insurrection is calling on the GOP to offer a small funding bill aimed at re-opening the cemeteries. No doubt they will, given the play this story’s getting in the news today, and no doubt Reid will instruct has caucus to vote no on it just like he wants them to vote no on restoring NIH funds for kids with cancer. It’s more important to maintain the “no negotiation” posture and deny the GOP any opportunity to ease the consequences of the shutdown than to, say, let the kids of the men who died on Omaha Beach into the cemetery in Normandy. If they can’t impose a hardship on living vets to teach people that Shutdowns Are Bad, maybe they can get ‘em in death. […]

Ahem. If these cemeteries are on foreign land they do not belong to the US.

Who would arrest a French person visiting one to pay their respects or to pick flowers?