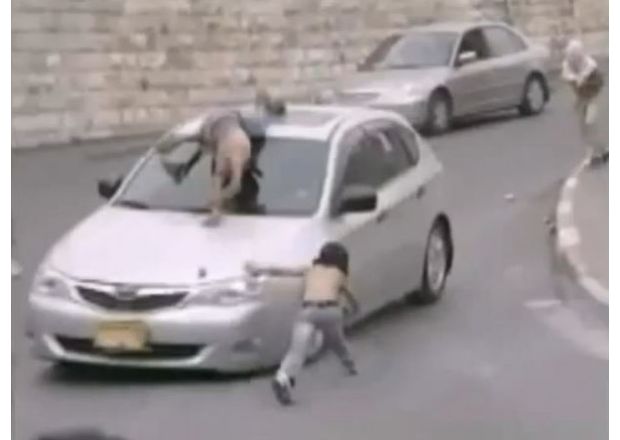 One week ago we posted about how a new website exposed The Truth About Palestinian Rock Throwing.

We featured a video exposing the The Wadi’a Maswadah Hoax, about a 5-year old Palestinian rock thrower allegedly “arrested” by the IDF.  In fact, the child was brought to his parents, contrary to media hype, which ignored a culture that pushes young children to the front lines. 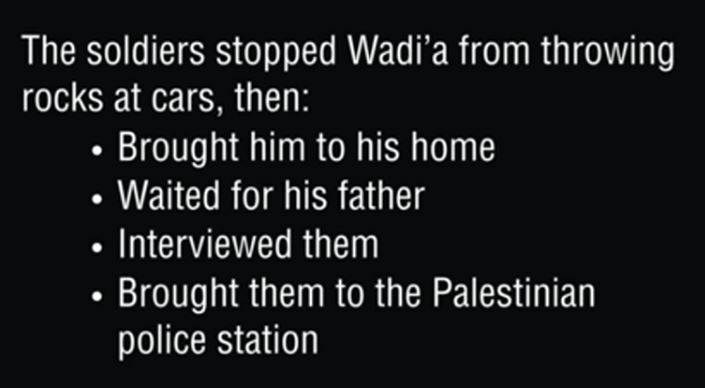 The website has a second video, about the misleading media narrative surrounding an Israeli driving into a Palestinian boy in East Jerusalem, The 2010 E. Jerusalem Ambush-Hoax:

On October 8, 2010 major elements of the Western and Arabic “news” media engaged in a campaign to elicit sympathy for a two pre-teen Palestinian boys, whom they claimed were “run down” by a Jew in E. Jerusalem.

The situation was greatly aggravated by dramatic photos and selectively-edited videos, which, on first glance, seemed to support this incendiary allegation.

In reality, these children – along with a gaggle of international “news” photographers – waited at the bottom of a hill for Jewish cars to roll past, at which point the children hurled rocks at it, and actually charged the car as it attempted to swerve to avoid hitting them.

Here’s the video, which was produced in 2010 by an unknown East Jerusalem resident:

In Iraq, fathers would blockade the entrance to the Green Zone by forming walls of their children strapped in car seats. When Americans would stop – a car would drive in from a side street loaded with explosives. This would kill Americans and all the little children lined up in front of them.

Little hands and feet would be blown 100 yards away.

That said, we are fighting a war of equivalencies. With sufficient distribution this video represents a successful effort to resist a single assault. The war will continue.

Israel just needs to take this bull by the horns and declare the territories gained after the ’67 war theirs period.

Then deport any protestors…

Yup. They should NEVER have ceded any territory. Wholesale deportation would’ve spared them thousands of dead and on-going terrorism. It would’ve given the world’s hypocrites only one thing to cavil against, to which Israel could have replied: show me the thriving Jewish communities in any Muslim country.

Native “activist” protestors in Canada have beenhave using the same tactics for years, although they not to date used explosives on the police.

The groups push women and children to the fore of their scrimmage lines along with “elders” (frequently nothing more than intoxicated middle aged men. Younger men and women move through the throng yelling threats and armed thugs wearing masks stand off to the rear and sides.

The thugs will wait till the mob has distracted the police and security, locate isolated vehicles and set them on fire with gasoline “Molotov Cocktails”.

The recent violence in New Brunswick followed this method and included some additional explosives that were seized before they could be used.

In this episode which spanned two and a half weeks, the drama was mostly contained until they had enough thugs and weapons in place to firebomb eight or so cars. There was also an incident of media people being forced from their vehicles and assaulted.

Professional organizers contribute to the activities but usually bug out if it looks like arrests are going to happen.

Apologies for the editing failure there ….

I guess the same applies for bludgeoning (by rocks or cars) as well.

The whole culture of using children as weapons and shields is despicable. I pray that this practice stops before God’s judgment is enacted.

I think the kid was not hit by the car but catapulted himself onto the hood to make it appear as if he was hit. The car was not going fast enough to flip him that high. I think he may have been selected for his athletic prowess.

I don’t get it. I would have backed up over them.

Too bad they did not get confused and start throwing cameras.

The 2010 video fisking the propaganda fails – too much text, too long a wait in the opening to get to the meat of the video. Americans don’t have the attention span to wade through it.

Reminds me of some of the american videos trying to counter the MSM spin about the shutdown.