We have featured Pallywood here many times, the Palestinian industry producing everything from outright video hoaxes to mere gross exaggerations all in the name of demonizing Israel.

But there is an even more pernicious western media version of Pallywood, the outright bias and misleading characterization of acts of terror against Israel.

These actions often are deliberate provocations set up by media and activists who side with the Palestinians, in which a phalanx of photographers and videographers waits to catch an Israeli soldier responding to a provocation.  The use of children as provocateurs is a common tactic — nothing plays better in the media than the image of an Israeli soldier confronting a child.

But those children often are engaged in violent behavior, particularly rock throwing.  A “rock” can shatter a skull, or in where thrown at a moving vehicle, can cause a serious accident.

To the media, rock throwing is no big deal.  Because the media has not been on the receiving end.

That’s where a new website, The Truth About Palestinian Rock Throwing, comes in.  The website, which just went live, aims to expose the western media failure to report the truth about these acts of violence, often committed by “children”.

On July 12, 2013 major elements of the Western and Arabic “news” media engaged in a campaign to elicit sympathy for a 5-year-old Palestinian boy, Wadi’a Maswadah, whom they claimed was “arrested” or “illegally detained” by the Israeli military.

The furor began after videos were posted by an anti-Israel “human rights” group, that depict the boy erupting in a crying tantrum, amidst heavily-armed Israeli soldiers.

In reality, the boy was caught throwing rocks at passing Jewish cars, the Israeli soldiers stopped him, brought him to his home, waited for his father, then delivered them to the Palestinian Authority police.

What these “news” entities and “human rights” group did not present, however, is the names and stories of any of the Jews who have been maimed and killed as a result of Palestinian rock-throwing — including 3-year-old Adele Biton, who was left with traumatic brain injury just four months earlier.

In its initial press release, the group explains why the website was started:

The website contains a chronology of rock throwing attacks that caused serious injury, and also explores financial contributors to the entities behind the rock throwing.

There is a particular focus on The UN-RWA’s enabling of Palestinian terror incitement and child indoctrination, and has started a Petition: 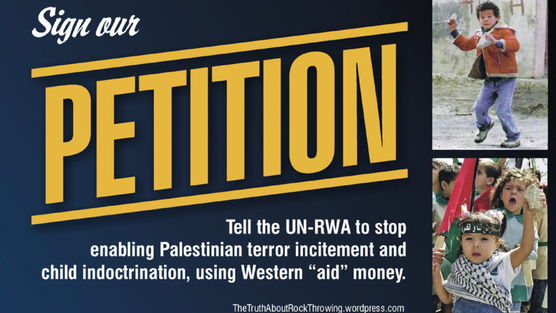 The anonymous creators of the website do not receive any government funding, only private donations.

The website also has started documenting how western media glorifies the rock throwers, but ignores the victims, as in this Huffington Post slide show (image via TTAPRT): 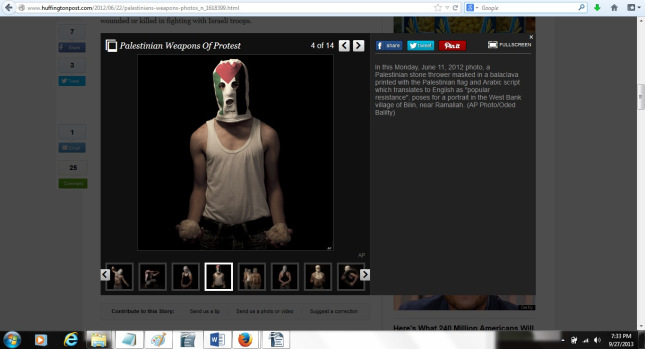 Legal Insurrection will continue to publish this excellent work exposing The Truth About Palestinian Rock Throwing.

As a resident of Shiloh, the home of Yehuda Shoham, who was killed by a rock in 2001 (http://www.shilo.org.il/shoham/yehudaShoham.htm) when he was but 5-months old, I salute this attempt to counter terror, the terror even Prof. Edward Said got caught up in at the fence in Lebanon in the summer of 2000.

the terror even Prof. Edward Said got caught up in at the fence in Lebanon in the summer of 2000.

Let me correct this clause for you.

the terror that Columbia University’s Edward Said willfully and joyfully joined in at the fence in Lebanon in the summer of 2000.

There! That’s better now! Said did not deserve the title “professor”.

I’ve never understood where people got the idea that rock throwing was harmless. Just what do they think being “stoned to death” is? I remember the riots shown on tv in the 80’s or 90’s and how they always talked about how the Israelis responded to “sticks and stones” being thrown with tear gas, water cannons and less than lethal rubber bullets as being an excessive use of force and brutality. Still the lies get propagated and Israel is, somehow, always the offending aggressor.

I wish the people at The Truth About Palestinian Rock Throwing much success in their efforts to correct these lies.

The people of Israel has proven to deserve our respect and admiration. In little more than 60 years, they have built an economic, scientific and technological powerhouse.

They have made such accomplishment in their land, one that is extensively documented as theirs, and from which they were exiled by the same kind of hatred that today throws rocks at their moving cars and at the skulls of their children. That same land was never made to prosper over hundreds of years.

Those who show support to Hamas and other terrorist organizations don’t deserve our respect, but especially don’t deserve to receive a cut of my tax dollars. The US government must immediately suspend any kind of aid until this abhorrent practice stops. We, as individuals, should immediately stop buying any products or services sold by those who announce said products on terrorism-supporting media outlets.

Pallywood and its western supporters regretfully have but one lie to give: the David and Goliath narrative turned on its head.

If this narrative were any more formulaic, it would be its own branch of chemistry.

LukeHandCool (who, as a five-year-old tyke, was one day sitting at the edge of an elevated, dirt-clod strewn, vacant lot with his buddy, hidden behind a tall line of vegetation. Wearing their army helmets, Luke and his buddy threw grenades (well, big dry dirt clods that seemed to explode like grenades) at the occasional enemy tank (well, car) passing by on the street below. They always seemed to miss, but Luke threw one large clod that exploded (just like a grenade!) when it landed right in the middle of the front hood of a Panzer (well, Ford).

The tank stopped, parked, and the driver got out and walked up the dirt slope towards Luke’s platoon’s position. Luke’s buddy fled, and as the enemy tank commander parted the tall, gangly foliage with his hands to find Luke sitting cross-legged, frozen in fear, upturned palms each holding a large dirt clod, the officer asked, “Did you throw that dirt clod that hit my car?”

Luke nodded silently. “Where do you live? I’m going to have a talk with your father tonight.”

Luke pointed out his house, and when the man mistakenly thought Luke meant the house two doors further down the street, Luke corrected him.

Luke remembers returning home soon afterwards, sullen, war-weary, and forever changed. His mother was vacuuming and Luke asked her if Dad was coming home that night. Luke’s mom looked a little puzzled, and she assured him his dad would indeed be home after work. Luke then asked her if Dad would maybe be away on another business trip, starting tonight. Luke’s mom’s look went from mildly puzzled to suspicious. Over time, Luke would find that to be the default setting for mothers of boys)

So where’s the rest of the story? I want to her the spank your arse part.

Sorry, that should’ve been “So where’s the rest of the story? I want to hear the court martial part”.

The guy never came by. I guess he realized I was just as shocked as he was that I actually hit his car. My secret mission remained a secret. No spanking.

But, around this time, one day I was eating lunch and I told my mom I could swallow a hot dog whole. I started choking and I remember seeing my mom and older sister just staring at me in shock … until my mom ran over and started hitting me hysterically on the back. That hurt.

Never again did I throw dirt clods at cars or try to swallow hot dogs whole. Fast learner, I guess.

What a very, very powerful video! This deserves to go viral. Thanks to whoever worked so tirelessly and creatively to put it together. And thank you, Mr. Jacobson, for posting it here. I’d say you got yourself quite a scoop.

This is excellent that they are doing this t o reveal global LSM and UN bias and complicity with anti-Israel terrorism. It is sorely needed because these days the Muslim countries seem to control the UN and stifle any criticism of the Arabs’ jihad against Israel.

Of course, they /could/ start throwing rocks back. Or would that be cheating?