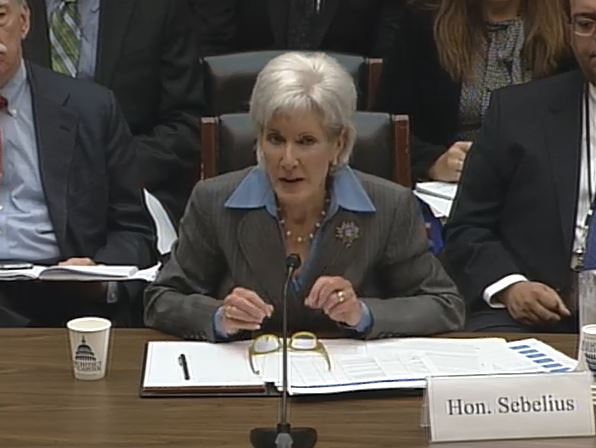 Health and Human Services Secretary Kathleen Sebelius will testify Wednesday morning at 9:00am ET before the House Energy and Commerce Committee.  The session, entitled PPACA Implementation Failures: Answers from HHS, is expected to focus on issues with the troubled rollout of healthcare.gov and address questions about why, despite such issues, HHS officials “repeatedly assured the public that implementation was progressing on time and as intended,” according to an advance memo on the hearing.

CNN reported Tuesday afternoon that the Obama administration was warned only a month before the launch of the federal health care website that were still some significant issues facing the project, according to a list of open risks outlined in a document from CGI, the main contractor on the project.

HHS Sec. Sebelius takes a seat as she appears before the committee on reviewing the implementation of #Obamacare pic.twitter.com/WlEYAEITmr

Sec Sebelius insists that website "never crashed" but rather "slowed." This is like a NASCAR that should run 200mph only "cruising" at 5mph!

Day 30 in my daily attempts to create a functioning acct. As Sebelius testifies: "The system is down at the moment" pic.twitter.com/kRti0phd3i

Sebelius does not release enrollment numbers in health care law. Says "The system isn't functioning so we are not getting reliable data"

Best Sebelius answer yet: "Whatever." Also known as "Bqhatevwr."

Video of Sebelius captured on hot mic saying "don't do this to me" http://t.co/HTLZgP1j1C

Mr. Obama doesn’t know a lot of things. What does he read on that iPad of his?

He plays poker with Sen McCain

So, would it be wrong of me to say She’s-bilious is facing her own “Death Panel” today, employment-wise…???

Actually, I bet she stays where she is as long as she wants. Accountability is not a trait of this nest of outlaws.

She will be rewarded for her loyalty.
Republicans in Congress should push hard to get her fired.

Kathleen Sebelius is not and was not the problem, and we know it. The problem has to do with the notion of nationalizing the health insurance industry.

But, Valerie, that “notion” doesn’t exist as an abstract in a jar somewhere.

It exists as a driving dream of the Collective, who are people who are prepared to do evil things to effect their designs.

Your statement is like saying Che was not the problem, it was the notion of Communism.

Worse, it exists as an enforced body of law.

Well, quasi-enforced. Waivers and such…

The “fire Sebelius” idea feeds the notion that the “glitches” in the website roll-out are the problem. It would also give Obama & ValJar a chance to posture as if they cared about serving the citizens competently.

Sebelius would be replaced by another coldblooded apparatchik who would proceed with the agenda of pounding down the citizenry — especially the kind of citizens who have been purchasing their own insurance all along.

She is not “the problem” but definitely she is part of the problem.

She went out of her way to lie and deceive the American people.

She’s the fall guy gal for Obummer – the ‘face of failure’. Unlike smiling Healthcare.gov girl, she can’t have the webmaster replace-the-face.

One look at CGI’s Monthly Status Report and deliverable data list is enough to assess the root cause of failure.

If Obama refused to NEGOTIATE with the GOP with regard to Obamacare, what makes you think he would negotiate more realistic schedules / requirements, etc., with his own HHS Sec?

But she’ll damn sure take the fall for him. And that’s the only thing I’d really fault her with, or anyone in the Obama administration for that matter. Why is it considered duty and honor to fight and take the blame for someone who has no sense of duty and honor to the people who elected him?

How I’d love to see Sebelius pull out a few memorandums or emails from the ‘coward-in-chief’ that holds her feet to the fire in the face of this disaster.

Wake me up when McConnel, McCain, Boehner and the GOP establishment are in that chair being grilled for funding this tool of tyranny.

Obama reads nothing on his iPad. It’s not even turned on. He thinks it’s an Etch-A-Sketch.

Is that a racist innuendo? I’m sure I can find a way to twist into just that, you racist!

If Sebelius were really accountable, the words “I’m accountable” would be followed by “and therefore I have tendered my resignation to the president, effectively immediately.”

…should be followed by

“and will submit to an investigation of how I systematically plotted to destroy America’s private insurance market, the economy at large and the freedom of my fellow human beings from my party’s extortionary laws”

Sebelius: “Hold me accountable for the debacle.”
[Sec. Sebelius throws herself under the bus.]

Blackburn: Is Obama keeping “if you like your plan you can keep it” promise?
Sebelius: “Yes he is”
[LOL] Next question: What color is the sky on your planet?

So sick of all the happy talk about “consumer excitement”. Keep pounding again and again that you cannot equate legal compulsion with “excitement”.

Why isn’t she being fired today? And why isn’t Obstaclecare being shutdown until notice?

The blatant bald-face lying of this administration is truly breathtaking.

And will the public FINALLY see it is Obama at the core, at the center, of these – ALL THESE – problems? Finally?!

Not as long as the MSM and tools like Sebelius cover for him. The “Limbaugh Theorem” in action…….

But, really, it was that disgusting video by that guy…that nobody saw…that caused the spontaneous systems crashes…that never were really crash-crashes, because the system always worked…except really slow…unless you compare it to a glacier. ‘Cause then it was really, truly, honestly FAST and NEVER crashy…

Sebelius is already backpedaling from the November 30 date for a fully functioning website. She is now stressing the concept that “continual progress is being made”.

In order to have coverage on 1/1/14, you must be enrolled by 12/15. All the talk about months left to sign up is meaningless for the millions who will be losing their existing coverage on 12/31.

Someone needs to pound this message home and ask Sebelius what contingency plans she has in place for these millions if they are unable to sign up by 12/15.

Braley makes an abject fool of himself trying to be cute.

“People went to see the Wizard of Oz because of the wonderful things he does!”

Uh, yeah … and when they got there they discovered he was a fraud.

Braley was my representative for a while. He’s not the brightest bulb on the string but he figured out Wonderland Washington in no time. Three months after he arrived in DC he was sending out trifold, full-color, heavy-stock mailings to everyone in his district on a monthly basis…all paid for by the taxpayer. That went on for years until the people of Iowa screamed about the expense.

The Wizard of Oz reference was unfortunate. I don’t believe there was a person who heard it who didn’t think, “But the Wizard was a fraud!”

As I said, Braley’s not the brightest.

When government procurement is handled by the DoD, system requirements are usually fixed by a configuration/revision-controlled system specification when the DoD awards the contract to the winning bidder. Any change to the contract or system specification by the DoD requires the contractor to prepare and submit detailed engineering, cost and schedule estimates to the DoD for approval. Attempts by the DoD to change contract or specification without contractor cost/schedule assessment are held to be “out of scope” and not acted upon by the contractor. In the defense and aerospace business, we often referred to such DoD attempts as ‘gold plating’, etc. The government can mandate contract changes, but usually they are reluctant to do that because contractors often react with exorbitant cost increases and schedule slides.

This contract/arrangement between HHS and CGI sounds like a fixed set of system requirements and schedules were not established. In fact, the CGI monthly status report showing a highly compressed development, test and deployment schedule, together with reports elsewhere of new regulations being dropped monthly well into this year, proves the fault of system failure rests with the Administration, HHS, Regulatory Agencies, etc.

It would be very interesting to me at least, to compare several consecutive monthly status reports from CGI, to assess the impact of fluid contract and specification requirements/changes upon product development.

By “testify” I presume you mean obstruct, obfuscate, and equivocate?

Of course! It’s par for the course for every Congressional hearing focusing on Administration officials’ misconduct.

The list goes on, but none – I repeat, not one – of the people “responsible” have been disciplined, sanctioned, charged with crimes, dismissed, fired, or held accountable in any way, shape, or form. (OK, AG Holder was held in contempt of Congress over F&F stonewalling, but it’s not like that’s made him more cooperative. If anything, he’s less so.)

“I accept responsibility..” (for developing a list of external entities to blame for this, which is precisely what she has done).

Someone please ask Sebelius why she isn’t admonishing the Democrats touting enrollment figures that there numbers are by her definition “not reliable”.

Guthrie asks the right question about what happens to those left in limbo. Sebelius has no response.

The contractors never suggested a delay because they testified that they had no authority to to do so you idiot!

C’mon Republicans! Up your game for christsakes!

Fire her. If you can find a reason, any reason, indict her.

Does anyone know if Sebelius’ claim that part-time jobs are at the lowest level in years is true? That flies in the face of everything we’ve been hearing.

The truth is probably that the part time job stats are printed at the bottom of the page in her jobs briefing – lowest place in years.

BCBS has been telling me I can keep my (high deductible) plan, so I have survived the first purging of the individual purchasers. But there will be wave after wave, pushing more onto government plans with fewer doctors.

And rules will keep changing till they drive insurers out of business. Then Hillary or Warren will run on the only solution … complete government control of health care and diet … with a new healthy product … Soylent Green!

They don’t care at all that people that had plans they like are losing them. It’s a feature, not a bug. And as Ace suggested, MOST of the increase is likely not because of the little added benefits, most is to pay for the uninsurable insurance deadbeat, that gets put in the same pool as the responsible person.

They openly stated with a smile, destroy private insurance to usher in glorious government care.

They should have hired EA(or any gaming software company) to oversee the rollout. They know how important it is for the software to work right on release day.