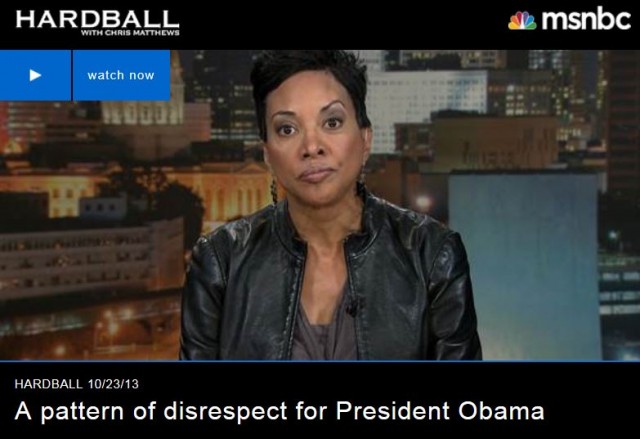 Dick Durbin’s Facebook comment that a senior House Republican told Obama “I cannot even stand to look at you” was exposed as a lie.

The lie did not originate with Durbin, he merely passed on what Harry Reid told the Senate Democratic caucus based on information provided to Reid by The White House.

That White House lie, now admitted but chalked up to a “miscommunication,” inspired Chris Matthews and guests David Corn and Cynthia Tucker, to lash out at Republicans for demonizing the President: 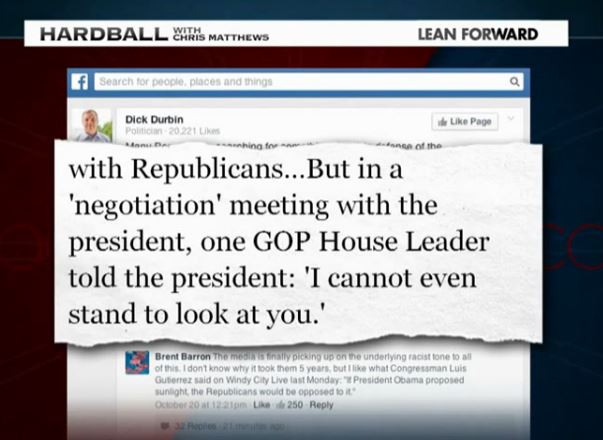 A main focus was the disrespect shown by Republicans by repeatedly calling Obama a liar, which the panel agreed was because of hatred of Obama for the “other” and not one of us, and in the case of Tucker, coming right out and calling it racist:

Because, you know, repeatedly calling a President a liar is beyond the pale.

Mere policy differences, or mistaken communications and assessments, never should be cause to demonize a President.

On that point, I’m sure all the panelists would, ahem, agree. 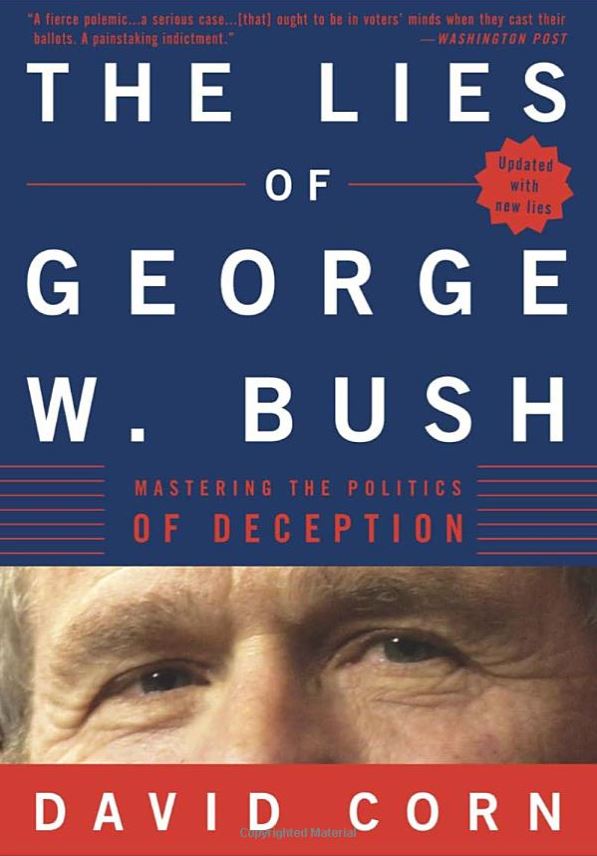 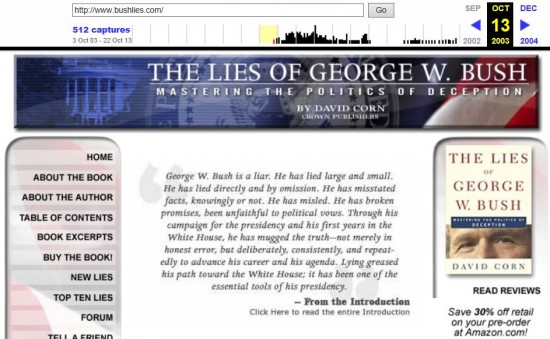 In our surreal culture no lie by the ruling class and its minions is out of bounds.

Heck, I can’t stand the sound of his lying mouth.

Same here. I mute the TV, change the channel avoid links with his name or picture on them. I know that everything he says, every time he says it, regardless of what he’s said before will be just another lie that millions of stupid people will believe.

If Obama’s mouth be movin, he be lyin’
What else is new?
“If you like your insurance plan you can keep it”
“What we saw last night was the result of a spontaneous demonstration over some heinous internet video”
“We don’t want to tax every business out of business”
“If you own a successful business, you didn’t build that!”
“I’m not a dictator!”
“Al Qaeda is on the run”

Well, Bush lied, while Obama merely miscommunicates. Not Obama’s fault if he has better euphemisms.

Exactly what did Bush lie about?

That the Longhorns would win the national championship.

He lied about quite a few things, like the cost of his (i.e. Ted Kennedy’s) medicare and education plans. And in general about how his spending like a drunken Democrat would not drive us into penury. But of course those aren’t lies the Dems care about. They claim he lied about the war, and the evidence shows that he didn’t.

Dems are losing it. Utterly delusional.

Why don’t they go back and look at how people thought of Jimmy Carter. Or, on the other side, Nixon.

They wanted him to be great. They wanted desperately to have a sign of greatness rise from the suppressed minority masses, so great that all the people recognized that their efforts, their life’s work, and that their cherished ideas, their do-gooder programs of decades finally have succeeded. And so brilliantly. The savior after that last miserable incompetent rich white guy who got into office only because his father was president. The final nail in the racism coffin. They were all deeply personally vested. The validation of their belief system, their ideology, and everything they would like to take credit for, from the civil rights movement onward. The messiah of the progressive vision.

That he’s incompetent, that they built myth upon myth, and that a narcissistic empty suit, a front man with no experience, was elected merely because he was “black” (he would never have been elected if he weren’t), and that they pushed this story for the ages, this saga for the history books, this heart-swelling, tear-jerking epic, all because they were so hungry for a hero and for validation (never mind that there are candidates but they don’t fit the ideology), is just not something they can admit to themselves.

It couldn’t be just a black president. He had to be among the greatest of presidents. So if the widespread dislike of Obama and his incompetent “leadership” is justified (and it appears that it is, so expect them to become more and more delusional and foaming), if those who are against him are not acting from racial animus, if he’s merely ordinary, or even less than that, then that leaves only one conclusion: not only have they all have been patsies, fools blinded by their own selfish needs and their own racismm but they know that they will not ever again have this moment in time. There can only be on “first black president”. The story doesn’t work if he’s mediocre. And the history book epic, the dream they harbored, is not just gone, but irrevocably gone forever.

“We elected the first black president!”

Wait, is this the guy who got into college as a foreign student?
What could go wrong?

Gah, you’re even worse than them. Are there not enough truths to be told about this man, that you must spread bizarre lies about him?

Then there were those who desperately wanted this product of selfish parents who deprived their son of a stable home life to succeed so they could continue to pretend the dysfunction in their own children was not the fault of their own irresponsible lifestyle choices. Is it a coincidence that the last two Democrats elected President were both the sons of multiple divorced mothers who pushed their sons to be somebody and that neither had a relationship with their biological fathers? While Clinton and Obama are different personality types, both are pathological liars prone to grandiosity who seek to avoid responsibility.

What on earth are you prattling about? Bill Clinton had no relationship with his father because he was dead. Just like Andrew Jackson. And how was his childhood any different from Gerry Ford’s, or Andrew Johnson’s? Or Herbert Hoover’s?

It’s my understanding that Harding was actually a pretty decent president as such things go.

Obama is not only a lying incompetent buffoon, but embarrassingly so.

Oh, I wouldn’t watch a second or read a word of anything by that filthy leftist hack David Corn. I’d rather watch Snooki or a Kardashian – they are far more sincere, and far less toxic.

When I see the name Cynthia Tucker, I know the word “racist” is going to be tossed out. She’s made a 30+ year career out of racebaiting. She is the main reason why I canceled my subscription to the AJC when I lived in metro Atlanta. She’s a typical MSNBC useful idiot.

The most polarizing president known to America: POTUS Obama – Iconoclast

icon•o•clast
noun \-ˌklast\
: a person who criticizes or opposes beliefs and practices that are widely accepted

This is very instructive of how the Collective works.

They sponsor a lie…or any meme.

That narrative…regardless of its being shown a lie to objective, informed people…is then built on and embellished until it becomes conventional “wisdom”.

Then, the very darkest of motives are imputed to those who are SAID to embody the problem.

You can see each step demonstrated in this little story.

I have a pattern of disrespect for MSNBC too.

Oh boy…. a ‘pattern of disrespect’ huh? The pattern of disrespect I have seen is a guy named Barry Soetero who has consistently lied virtually every time he has opened his mouth to the American people since he’s first ran for President. He has done nothing but use divisive language to further his political agenda. He demonizes his political enemies. He disregards the Constitution and the rule of law (hell, even laws with HIS name on them). Basically the guys is so incessantly full of shit that I don’t see how anyone could possibly have any respect for him. I know I sure don’t. But he brought it on himself so his sycophants need to just shut up and own it.

I’m gonna pat myself on the back and say I called it right cuz here it is on Wm’s Saturday night card game. https://legalinsurrection.com/2013/10/white-house-gave-false-cant-stand-to-look-at-you-meme-to-harry-reid-who-gave-it-to-durbin-who-went-public/comment-page-1/#comment-482560

From now on, another Obama lie, intended to smear the GOP as racist, will be print rayed as the “truth”.