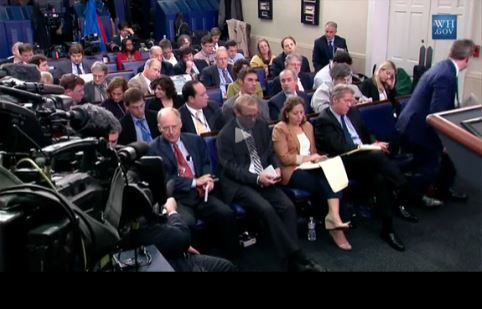 There was one singularly most important aspect of the Obamacare computer problems detailed in this NY Times article, From the Start, Signs of Trouble at Health Portal.

In March, Henry Chao, the chief digital architect for the Obama administration’s new online insurance marketplace, told industry executives that he was deeply worried about the Web site’s debut. “Let’s just make sure it’s not a third-world experience,” he told them.

Even some supporters of the Affordable Care Act worry that the flaws in the system, if not quickly fixed, could threaten the fiscal health of the insurance initiative, which depends on throngs of customers to spread the risk and keep prices low.

These are not glitches,” said an insurance executive who has participated in many conference calls on the federal exchange. Like many people interviewed for this article, the executive spoke on the condition of anonymity, saying he did not wish to alienate the federal officials with whom he works. “The extent of the problems is pretty enormous. At the end of our calls, people say, ‘It’s awful, just awful.’ ”

Why would he be afraid?

Well, just ask any journalist who dares even ask a hard question of the Obama administration, like Ed Henry of Fox News, via Mediaite:

Carney’s snub of TV reporters Wednesday followed recent sharp exchanges with some TV reporters, particularly Ed Henry, whom Carney repeatedly posed as a partisan opponent. At Friday afternoon’s long-delayed briefing, Carney had gone through every TV reporter when Ed Henry began to ask his question. He got out “Jay…” before Carney called on The Chicago Tribune‘s Christi Parsons, and as she asked her question, Henry could be seen shaking his head.

Henry tried again on the next question, and when Carney ignored him again, Henry smiled, got up, and walked out.

While Fox News hasn’t always gotten a question at presidential press conferences, this was the first time in memory that a Fox News reporter wasn’t called on at a daily briefing.

Or just ask other journalists, assuming they are not too scared, about how their sources have dried up:

Or veterans trying to visit the WWII Memorial.

Among Obamacare’s many problems, technology is the least of it.

Obamacare vests more power in more bureaucracies which have shown themselves willing and able to act with petty vindictiveness, spite and political partisanship.

Nice little medical condition you have there.  Would be a shame if that leaked out.

I’ve been watching Carney grow increasing snarky (dismissive even derisive) and become downright hostile to Henry over the past few weeks.

I’m surprised Ed has enough self-control not to smack the little twerp in the head.

Why waste your time and watch at all? I have never heard an Obama speech, and if he appears on a news segment, I walk out of the room. Not going to get my BP up.

I was thinking about that this morning, and the best analogy is the “battered spouse syndrome”…

the are hurt, but they’ll defend Barracula against all others.

That doesn’t address this issue at all.

There’s only one press secretary, and he holds only one of these “briefings” a day (if that, I don’t follow these). Fox has to be there.

And isn’t it major news if the Administration stops talking to Fox altogether?

Henry should continue to attend, and continue to walk out if snubbed. With any luck it’ll become a notable news story.

Notice how all the other ‘journalists’ up and left with Henry in a full throated defense of the First Amendment, journalistic courage in the face of power, solidarity in the Fourth Estate and all that crapola!

This is going to hurt but I must confess.

Due to my inability to secure a favorable custody outcome (in a previous marriage experiment), my son spent too many years under the watchful care of his mother, who proceeded to pump him full of lib/left/prog juice. By the time I got him, it was too late.

What does this have to do with the thread? Well, my first mate was wandering around like weaselzippers and found the kid’s linkedin page. His bio contains his description of his current job – writing code for ACA implementation. Of course, this is in Seattle and he’s a UW grad and this is employment via stimulus grant. I’m seeing a pattern here.

All these kids being rammed through with tons of student debt are being conscripted (selective service, anyone?) into certain jobs thast promote the crap they were fed in college.

Now for the big question: is he sabotaging the code writing assignment in an effort to reject his lib training because he realizes it’s a loser lifestyle? Or did he get certain instructions which he is following to the letter even though he realizes that the result will be junk?

I would ask him which it is but I couldn’t trust that the answer he’d give would be the truth. He sees all paternal interactions as a competition, and he thinks it’s great sport to mentally outperform the old geezer.

I bet he is getting a few dollars of his college debt forgiven for writing this code. I hope the hell they are sabotaging it.

I highly doubt he is intentionally sabotaging the code. But it doesn’t matter. The brightest software developers on a multi-million dollar project like Obamacare can easily be stumped by idiot project managers with feuding/uncertain project specifications.

My prediction for the exchanges is that they will continue to have severe problems for the next 12 months as the idiots in the federal government try to patch and hack their way into something that works. At some point it will become clear that the architecture and design is so bad that only a complete re-architecture will resolve the problems.

Your son will have gotten some valuable experience and have some of his debt written off. That is the good news.

The bad news is that as a UW CS graduate he could go to just about any company and get a high-paying job. Twitter, Facebook, Salesforce, Google, Microsoft and gaming companies are just a few of the very large companies desperate for engineering talent in Seattle. So he is working for the Obamacare idiots because he wants to do that.

Ed Henry; The White House Face for Fox News.
An irritation in of itself.

The action defined more than the act itself. Ed could not have made a better public statement of the Carney Snark or the White House bias than by his standing up and leaving.

The problem is what Ed Henry didn’t do. As discussed in last night’s thread about calling out leftist behavior, Henry should have done more than smile ruefully and slip out the back. He should have stood up and called out the insulting sham of the White House press briefing, not on behalf of himself but on the American people’s right to have full and fair hearing of the news. He could have made himself a hero and launched a viral video in the service of press freedom and America. He could have spoken up for millions. But I guess that wouldn’t have been “professional” or proper etiquette. Forfend that we disrupt the decorum of a great American journalistic-democratic tradition, right? Better to slip out the back.

Until we take it to the next level, risk making spectacles of ourselves to confront these liars and bullies who exploit our forbearance, nothing changes. They just get more confident and abusive in the face of our long-suffering good manners.

It is another great service from Prof Jacobson that we are now talking about how to handle these situations. From Ed Henry to our individual lives we are facing this and grappling with how best to respond. As you say, “our long-suffering good manners” and, for many of us, our “turn the other cheek” upbringing are not serving our cause. The Founding Fathers overcame all of that, and we should, too.

Well, before he does that, perhaps he should speak with his employer. And if his employer doesn’t concur, he should quit, and let someone else be the patsy.

“Barack Obama has vested more power in more bureaucracies which have shown themselves willing and able to act with petty vindictiveness, spite and political partisanship.”

Fixed it. Fish rots from the head. This problem is systemic, showing up in the DOD, EPA, and DOJ, at least.

Perhaps he learned it from Pelosi and Reid.

Well, playing “hard to get” backfires sometimes. But don’t fret, Jay Carney. As the saying goes,

There are plenty of barking seals in the press pool.

This is just another instance of the arrogance of this Administration as they, now openly and overtly, amass more and more power. They ignore 200 years of traditions and openly sneer at the Constitution and the Bill of Rights.
And why not?
The Media is either in their pocket or too afraid of losing access and in their minds, relevancy. They, for the most part, admire Obama and agree with his goals but, even more so, they fear him.

The Republicans, except for a few exceptions, are so afraid of bad press that they won’t attack Obama directly but labor to keep their criticism reasonable and well mannered while Obama undermines our Constitution and ruins our economy, and while he emasculates all political opposition.

And we are not much more effective. We act like we have accomplished some great victory because we ran through a few barricades keeping us from our own monuments as we quietly acquiesce to all of Obama’s
other excesses and depravations.
What will it take for a groundswell of Americans demanding impeachment now! More likely, to be decorous, we will sit in the pot like good lobsters till the water boils.

I wish Ed Henry had stood up, in silence with his hands politely grasped in front of him, and waited for Carney to acknowledge him. And continue to do that at every press conference until Carney calls on him. It would make those lap dogs in the room uncomfortable, and expose them for the frauds that they are.

by leaving, I think most of the room just said, “Good, he’s gone!”

BTW, it’s the end of week 2. Nobody, nobody, is talking about numbers this week.

Doesn’t anyone have some clue about the numbers signed up for Obamacare this last week? After the big revamp last weekend?

I don’t believe anyone has a clue. I’ve read reports stating that the healthcare.gov website software is repeatedly enrolling, dropping, enrolling, dropping some percentage of the same enrollees, skewering the numbers, along with all the other ‘glitches’ we’ve heard about, and now we see that firms doing bidness with the federal gub’mint are afraid to speak out on problems, concerns, etc. Factor in that the fed gub’mint will flat out lie about anything and we couldn’t trust any numbers even if they were being offered.

I haven’t been keeping a scorecard but I have the impression many of the negative reports are originating from the software contractors, who are between a rock and a hard place. They want to get paid by the government. They also want their other customers to know that the government was a lousy client that gave them impossible to meet demands.

Why I am not a journalist: Because if I were Ed Henry, I would have stood up, walked over to Carney’s podium, pissed on it, and THEN walked out.

[…] Nice little medical condition you have there. Would be a shame if that leaked out.” –William A. Jacobson […]