Traditional press reduced to begging for information bones thrown to them by a “closed, control freak administration” 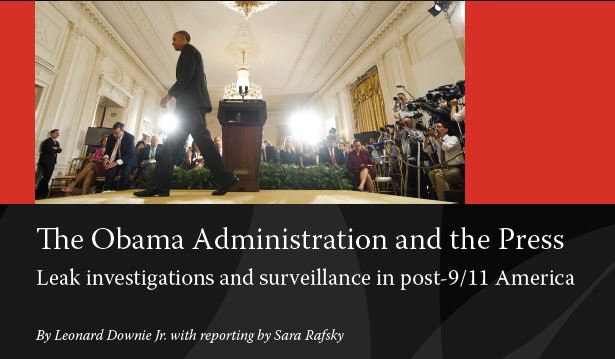 The report by the Committee to Protect Journalists on The Obama Administration and the Press has received a lot of attention because of the details about Obama’ extensive use of the Espionage Act of 1917 and relentless pursuit of leakers, drying up confidential sources:

“I think we have a real problem,” said New York Times national security reporter Scott Shane. “Most people are deterred by those leaks prosecutions. They’re scared to death. There’s a gray zone between classified and unclassified information, and most sources were in that gray zone. Sources are now afraid to enter that gray zone. It’s having a deterrent effect….”

But there is an equally important aspect of the CPJ Report that has not received press attention — the extent to which Obama has managed to create his own social media news operation that complete evades the traditional press:

The Obama administration has notably used social media, videos, and its own sophisticated websites to provide the public with administration-generated information about its activities, along with considerable government data useful for consumers and businesses….

Instead of providing greater access for reporting by knowledgeable members of the press, Compton noted, the Obama White House produces its own short newscast, “West Wing Week,” which it posts on the White House website. “It’s five minutes of their own video and sound from events the press didn’t even know about,” she said.

The Obama administration is using social media “to end run the news media completely,” Sesno at George Washington University told me. “Open dialogue with the public without filters is good, but if used for propaganda and to avoid contact with journalists, it’s a slippery slope.”

The press has been marginalized as a source of hard news not just by the aggressive leaks, but by Obama’s alternative, completely controlled news operation.  The press needs the bones of information thrown them by Obama, much more than Obama needs the press.

How did the Espionage Act of 1917 pass muster?

We should repeal it, and place it alongside the “Alien and Sedition Acts” of 1798, on the dustbin of history.

BTW, I saw the term “seditious” used yesterday in a Beastly Day piece on the shut down.

So the Beastly Drag is being seditious eh?

The major media is complaining? It’s their own fault. Maybe it’s time they re-learn how to do real investigative reporting, which doesn’t involve merely parroting unnamed leaker sources and official answers to questions.

It’s their own DAMN fault.

But they’re too busy staring in the mirror and up….Obama’s…….. to do REAL WORK!

In a fascist takeover, it’s always the facist’s enablers who get taken out first. (Just ask Ernst Rohm, or Stalin or Saddam’s early associates.)

The corrupt hacks who enabled Obama are under a threatened seige by the justice department. Chaos reigning aside, it’d be fun to watch a few of them get locked up.

The LSM asked for it, and they got it. Obama began treating them with cold disdain during the 2008 election, and they lapped it up. He went months without doing interviews, and they gave him favorable press. They were selling him, and he was showing them that they were so invested in him that he didn’t need them. Now, the LSM’s own actions are coming back to bite them on the arse. Well, good luck with that, suckers.

They never think the beast will turn on them.

They never think the beast will turn on them.”

If the little puppet emperor were to succeed with total socialization of America, most of the lamestream media would be shot or imprisoned.

or his Sex Slaves! lol

The Ugly Beast turns on the ugly beasts…….

The press has been marginalized as a source of hard news … by Obama’s alternative news operation.

They were certainly complicit in their own marginalization. Their decision not to report eventually undermined their ability to report.

Suicide by rusty, dull sawblade across throut …. is what they have done to themselves…..

The expression of a policy is a written plan in detail, something more substantial than a scribble on a cocktail napkin or a few comments on a teleprompter. The public has already lost when the discussion of legislation comes out of a back room deal or a press conference. The US populace deserves more respect than for a President, Senator, or Congressman to limit explanation to press conferences and speeches.

There was no reasonable debate on healthcare, for example, because Team Obama and Democrats in Congress did not release a readable document spelling out thepolicy that they wanted to implement and the research supporting that policy. We needed to know why it was supposed to work.

We need proposed results, expected evolution, methods, justifications, comparative studies, past successes of similar policy, funding sources, expected difficulties, the works. What has worked, not what might work.

I hope people of all parties and positions could agree that this is fundamental. It is non-partisan to demand that the President and all politicians show the careful research behind their proposals. If there is no such plan, then that is a horrible misuse of office and a betrayal of the public trust.

The Congress and Obama should proudly present the careful research that supports their proposed rearrangement of healthcare, and all other things.

Each government program should have this explanation, revised and updated according to measured results. It should be the official product of government, not the result of supporters pointing to academic papers.

The government presents less planning and justification than a contractor does for a house renovation.

Where are the policy papers which explain and justify the giant experiments that our government is forcing on the people? Where are the measured results of government programs? These are things we might get if we ask, or demand, and shame them into a response.

You live in a world where data, facts, reason and logic rule. In the political world dominated by Democrats, those things are completely irrelevant. The only thing that matters is emotion.

Take Medicare. The average couple retiring today earning an above average $89,000 will have contributed $114,000 in Medicare during their life. They will, on average, consume over three times that amount in Medicare benefits.

In a rational society ruled by reason, we’d understand that there is a serious financial problem with the program. When Paul Ryan proposes a solution, what we get from Democrat allies are television commercials with a Paul Ryan look alike wheeling a wheelchair bound granny to a cliff where he dumps her off the mountain.

Democrats talk about how popular and wonderful Medicare is. If I deposit $10,000 in a bank and the bank let’s me withdraw $30,000, that’s going to be my favorite bank. Of course, in the long run that bank will be ruined financially. But until then, it’s going to be very popular with the people sucking it dry.

Obamacare was sold on a complete pack of lies. I submit to you that virtually all elected Democrats and most of the MSM were fully aware of the lies. But they just did not care. And they won’t care unless and until Obama supporters actually feel it in THEIR pocketbook and start giving elected Democrats an earful.

We live in a post-reality and post-truth political world where emotions rule.

Simple – Obama punishes all dissent. Since taking office, he has used every agency of government to persecute the opposition, whether the press, taxpaying citizens or legislators. He has shown himself to be ruthless, hateful, spiteful and self-absorbed.

Of course, during the Watergate scandal the Nixon administration gave the media all the access and information they needed. It wasn’t necessary for the media to do any investigative journalism in those days. /sarc.

Do they expect to be spoon fed?

Do they expect to be spoon fed?

Of course they expected that. They dragged Obama across the finish line in 2008 (he’d have lost if they’d actually reported on his past), and they felt that they were part of the team and were in line for their rewards. And it’s taken more than four years for the scales to fall from some of their eyes.

Worse, many still willingly wear those scales, and still put their kids to bed with the lullaby ‘Obama’s gonna lead us…’

To me, it does not appear the majority of the press will be affected by this- it is right where it wants to be.
They are in this thick with Obama and are relishing every minute they can demonize Republicans. Many have an incurable infection of ideological emotionalism that results in sentences or words saturated with outrageous adjectives and extreme metaphors. They are thriving in this environment.

The media has been complicit in their own subjugation to this administration. The media love of this President and their own liberal agenda is leading to their downfall, and they don’t really care. Agenda trumps everything.

The media are owned by Soros and the progressives. They only do what they are told and allowed to print/say.

What we have is Pravda USA.