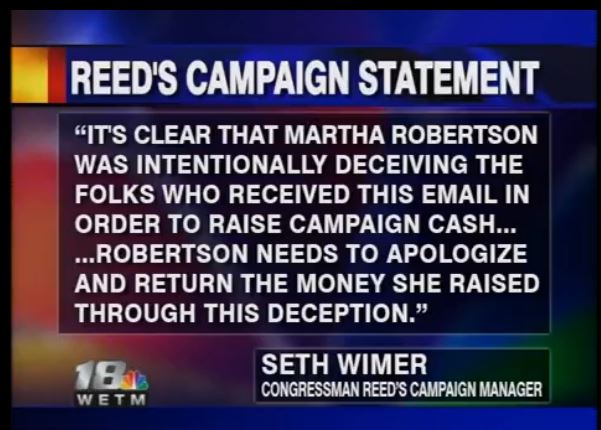 NY-23, a Republican-leaning District that includes Ithaca and most of the Southern Tier, is a high profile target for national Democrats.

The DCCC has it on its Jumpstart Candidate list and MoveOn.org via PPP Polling is claiming the district is competitive. (See this critique of these PPP messaging polls.  Frankly, several of the PPP questions sound more like push polling.)

Yet Martha Robertson, the Democratic challenger to incumbent Republican Tom Reed, has a fundraising problem as to which her campaign has been on virtual lockdown.

Robertson sent a fundraising letter claiming her campaign had “caught” GOP operatives trying to take down her website. That pitch, just hours before the September 30 quarterly deadline, was meant to fill what the letter claimed was a fundraising shortfall.

But the campaign repeatedly has refused media requests — including by Legal Insurrection — for proof of the accusation.

In the one statement she did give on the situation, Robertson appeared to back away from the accusation of GOP hacking, merely stating that her website operator noticed suspicious activity. But neither Robertson nor the campaign has addressed the situation directly, drawing local television coverage.

Now the Reed campaign is demanding Robertson admit to the false fundraising solicitation and return the money raised.

(WETM-TV) – Congressman Tom Reed is calling on Democratic Challenger Martha Robertson to give back the money she raised from a September 30th e-mail to supporters where she claimed “GOP ops” were hacking her site.

In an interview with the Star Gazette, Robertson said her web manager “noticed some very, very unusual activity,” but did not say the site was hacked.

Congressman Reed’s campaign, through his campaign manager Seth Wimer, responded Wednesday, saying in part, “It’s clear that Martha Robertson was intentionally deceiving the folks who received this e-mail in order to raise campaign cash… Robertson needs to apologize and return the money she raised through this deception.”

WETM reached out to Martha Robertson’s campaign for comment Wednesday. Our calls and e-mails were not returned.

This morning we made yet another request to Robertson’s campaign, including Chair Nate Shinagawa, for comment, but have received no response.

This issue is not going to go away.

I would love to see this issue go all the way through the court for a ruling.

Though such fallacious claims have been made since the days of the campaign between John Adams and Thomas Jefferson, it still doesn’t make it right; especially when false accusations of criminal behavior are used to solicit funds over the internet. (I.e. constituting “Wire Fraud”)

I am shocked – shocked! – to find gambling going on in here.

Boy howdy, does she ever have the look of a Gender Studies Professorette!

The 23rd is really closer to a “safe” Republican seat. It contains all or part of eleven counties and stretches from Ithaca to Lake Erie. It is an R+4 district and in 2012, Nate Shinagawa did not dent the R+4. Yes, he took about a 10,000 vote plurality out of Tompkins, but lost by a wide margin district wide. Why? Because Ithaca is not the central factor in the district. It is outweighed by the other towns and rural areas, including pro-fracking areas in which Robertson’s anti energy development ideas won’t play. Robertson, coming out of liberal Ithaca, doesn’t understand the 23rd or the uphill challenge she faces.

The “scandal” around Elizabeth “Fauxcahontas” Warren’s laughable claim of Native ancestry never “went away”, either, for all that was worth. In the end, I’ll be very surprised if this bogus “hacking” claim affects a single vote.