Martha Robertson in NY-23 has yet to provide proof of the fundraising solicitation that GOP operatives tried to hack her website. (Update – NY Daily News picks up story based on LI reporting)

Martha Robertson is the Democratic challenger to Republican Tom Reed in NY-23, one of the few competitive districts in the House. While the District leans Republican after redistricting, it contains Ithaca where a heavy Democratic turnout could make the race competitive.

Robertson is a Jumpstart candidate for the Democratic Congressional Campaign Committee and a priority candidate for Emily’s List.

As I previously posted, on September 30 Robertson’s campaign sent out an email soliciting donations as the fundraising Quarter was ending based on the accusation that the campaign had “caught” “GOP Ops” trying to take down Robertson’s website. 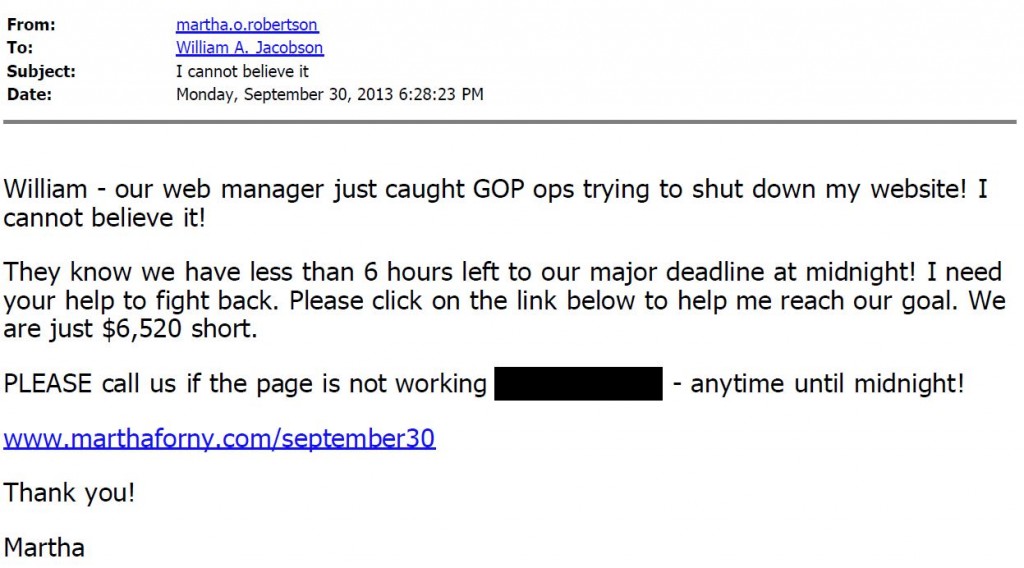 Yet Robertson’s campaign would not speak on the record as to any evidence supporting that accusation.

This refusal to back up the accusation raised the possibility that if Robertson had no evidence supporting the hacking accusation, the fundraising solicitation was made based on false pretenses.

Despite my follow ups, including with the campaign Chair, the Robertson campaign has not provided any proof to back up its claim. 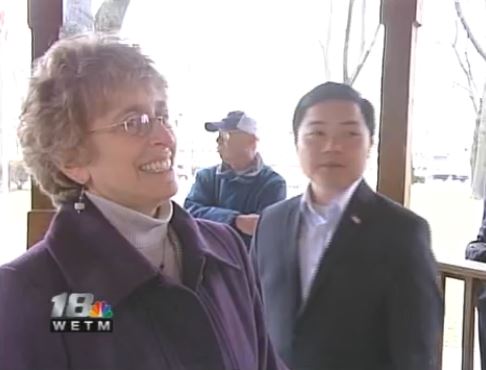 I have left a phone message seeking an update as to Robertson’s proof, and emailed her campaign requesting comment for this story.  I also contacted the campaign’s Chair, former congressional candidate Nate Shinagowa (in image above), who told me by email that he had no day-to-day involvement in the campaign. As of this writing, no response from the campaign.

Apparently I’m not the only one getting the silent treatment. A local television station also received no response from the Robertson campaign:

WETM reached out to the Robertson campaign Saturday for comment on the Congressman’s statement. Our e-mail was not returned.

The Reed campaign jumped on the accusation, demanding an answer.  (Letter embedded below.) but also received the brush off, commenting as follows in an email to me:

We’ve received no response. We believe Martha Robertson needs to either explain what happened or explain why she is lying in order to try to raise campaign funds. These are legitimate questions and she is refusing to answer them.

I reached out to the DCCC for comment for this story, but no response. The National Republican Congressional Committee provided this statement:

“Every report out there has Martha Robertson refusing to answer questions about this alleged “hackergate” situation. The logical conclusion to be drawn from her silence is that her campaign made a false accusation via email solely for the purpose of soliciting campaign funds. At the very least that shows a stunning lack of judgment and integrity on Robertson’s part and voters should really start to ask questions about Robertson’s values and fitness for higher office. Whether that email also constitutes something even more serious is certainly a legitimate question that only Robertson can put to rest by facing the music and talking to the media about why this email was sent and for what purpose it was sent.”

Update:  The NY Daily News has picked up on the story based on our reporting:

Republicans are privately convinced Robertson’s campaign concocted the claim. They are stopping just shorting of saying so.

“This is about her credibility,” Wimer said Monday. “Is she going to blatantly lie to raise money?”

“She’s gotta take responsibility and ownership for it, if she’s telling a lie,” he said. That’s her name on there and nobody else’s.”

A Washington lawyer tracking the case noted the lying in a campaign solicitation may be wire fraud.

If she’s elected, she’ll fit right in with the rest of the Democratic caucus.

I thought being a liar and a criminal were prerequisites for Democratic candidates.

And starting with Obama, it violates their Diversity Outreach Program to require any actual accomplishments, qualifications, or verifiable transcripts.

Looks and acts like Elizabeth Warren. The new face of the Dems.

It’s not a California-girl look, fur sure.

This as almost as bad as when Anthony Wiener claimed he was hacked. I say almost because he should have been tech-savvy enough to at least realize that those kind of things are logged. But that’s the signature of a Democrat, never learn anything from history.

She looks Commanche to me.

Can’t wait for her ‘buffalo tips on toast’ and ‘deer meat soup’ recipes to come out.

nah, the Comanche were fearsome warriors.. she is just a soft, pudgy, androgynous dough-girl looking thing.

“This is about her credibility,” Wimer said Monday. “Is she going to blatantly lie to raise money?”

Elizabeth Warren lied to raise money. It worked before.

I read an interesting article quoting Bill Ayers today… he was quoting as saying that basically the Democrats had devised a strategy to simply ignore any media requests that happened to stray off the approved proggie plantation. Why not, when the vast majority of the press won’t call them on it?

Thank you for this post, professor. Congressman Reed has been a breath of fresh air after years of Maurice Hinchey, a true dim bulb and Democrat rubber stamp, the gift of one of the more egregious gerrymanders in the country.

For the benefit of your other readers, Hinchey was a NY state union guy (what more do you need to know?) from the down-state, mid-Hudson population center region whose district snaked up creek beds, through cuts in the hills, picking up population-175, blinking-light, cross road settlements along the way to bring in the Socialist People’s Republic of Ithaca.

Upstate New York needs desperately to get out from under the heel of down-state, eternally corrupt, muscle-machine politicians in Albany, NYC, and Washington. Congressman Reed appears to be his own man, it would be a tragedy to lose him to to another rubber stamp puppet for Cuomo, Schumer, and the NY State Republican party (from whom I pray he remains distant).

Thank you for the continuing details that Robertson and her campaign continue to display, which resemble so much the nasty character and behavioral traits of Elizabeth Warren. Additionally, it’s doubtful she has anywhere near Warren’s crust and would simply be another rubber stamp puppet for Schumer and the Democrats; a congressional version of our Senator, Kristin Gillibrand, another gift from NYC, Albany, and the Working Family Party, an ACORN spin-off.

do people really fall for these “midnight deadline to meet our goal” fundraising pitches ? has any candidate ever admitted to not meeting the goal and, therefore, dropped out of the race ?

I, being the “Other Paul”, have pretty much given up on donating to the political process at all.

Where’s the return for my money? 🙂

In all seriousness, It seems that anyone actively seeking a political office these days is either fighting for their liberties, and the donations will flow naturally,

or they have to lie, and obfuscate the truth in order to con people out of hard earned money.

I guess it doesn’t help that I’ve not been represented by my “Representative” now for almost 20 years, having lived in California, and now Oregon.

Standing next to the Jap-American I guess her first name is really ‘Marthra.”

Martha Robertson has proof and plenty of evidence. But to quote Liz Warren, “They’re not for you.”