It’s a scale-back, not a shut-down, and therein lies a solution 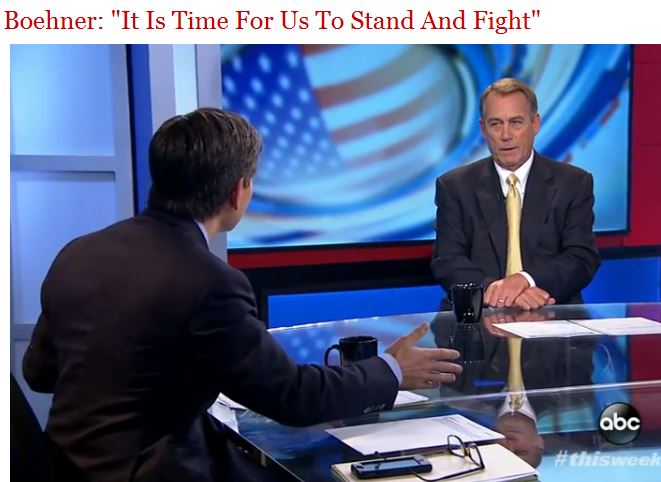 Rahm Emanuel, speaking soon after Obama took office in 2009, famously suggested that the Obama administration would not let a serious crisis — the Fall 2008 credit crisis — go to waste:

Republicans would do well to heed that advice, advice which Obama used to his advantage to push through the failed Stimulus and then Obamacare.

Republicans have an opportunity to turn the government “shut-down,” which really is a modest “scale-back,” into a lesson on how we have more government than we need to provide essential services.

While the fight over Obamacare led us here, and the debt ceiling is approaching, the budget is the battle which is winnable, and the current scale-back may be a road map.

We’ve been here before.

In the summer of 2011, just after the debt “deal” that led to the Sequester, I wrote, Dog, Car, Debt Ceiling:

But the debt ceiling was an imperfect device on which to mount the effort to change the direction of government. Unlike a “mere” budget impasse resulting in a partial shutdown of government, the debt ceiling holds more risk. I never bought into the August 2 drop-dead date, but I do accept that with $100 billion per month deficits we could not last long after August 2 before collateral effects were felt. Those collateral effects go beyond a debt downgrade (which probably will happen anyway), and include economic dislocation would be hard to predict politically….

The Sequester, once viewed with dread by both parties, now mainly dogs Democrats.

Byron York points out that the federal government continues to spend 83% of its total spending authority, Where’s sense of crisis in a 17% government shutdown?  What we are experiencing is a government scale-back, not a shut-down or even partial shut-down.  There are few if any government departments that do not operate at all; some have been scaled back more than others.

The Pentagon even is recalling almost all of its civilian employees starting today.  Republicans in the House already have passed several funding bills for other departments, such as NIH, Veterans Department, FEMA and more votes are on the way in coming days.  The scale-back would scale down, if Democrats would let it.

What started as a fight over Obamacare that Republicans “stumbled into,” now presents a broader opportunity about excessive government.

Contrary to the mainstream and Republican punditry, the government scale-back is precisely the hill to fight on because it causes the least impact on the nation.  We have had 17 prior government “shutdowns” including 12 when Tip O’Neill was Speaker, and the long-term effects were minimal.

The extensive efforts the Obama administration has made to make life as difficult as possible for Veterans and others seeking to visit high-profile monuments and memorials reflect the reality that a government scale-back does not impact most people.  Obama needs to show the public some horrific effect of a scale-back, even if it means contriving the horror (which has backfired).

The limited effects of a scale-back also are why Democrats from the President on down have used increasingly shrill and demeaning taunts at Republicans and particularly the Tea Party.  Me thinks the name-callers doth protest too much.

John Boehner stated yesterday that he is prepared to stand and fight unless Obama negotiates.  That’s the right way to frame the problem. The problem is a President who has trapped himself on a no-negotiation ledge.

We need to let the public know that we are willing to help Obama get off the no-negotiation ledge, but we can’t force him.  Only Obama can get Obama out of the trap he set for himself.

Where does Obamacare fit into all this?

The changes demanded of Obamacare by the House — while meaningful and fair — would not defund the program.  Obamacare should be part of the mix because the program is such a big cause of our job creation problem, but it’s still about the budget.

Bend the curve some more.  Or rather, scale-back.

In August 2011, as the dust was settling, I wrote Please, let’s go through this again:

One of the consistent media talking points is that the nation “should not have to go through this again,” meaning the debate over raising the debt ceiling.

I could not disagree more, and look forward to going through this — or something like this — when the “super committee” makes its recommendations (assuming the deal goes through), when we argue over the expiration of the Bush tax cuts as part of the presidential campaign, and all next year. This has been one of the most informative and nationally enlightening debates we’ve had.

People have become educated as to the dangers of deficits and the debt.

By all means, we should have to go through this again, soon.

Update: Ed Morrissey reports that the White House indicated today it would take a short-term deal on the debt ceiling:

Why reverse course and agree to a short-term debt ceiling lift now? I’d suspect that the White House has discovered that its shutdown strategy is backfiring in a spectacular manner, thanks to the spiteful attempts to impose unnecessary and arbitrary pain on Americans for the last several days. It might also be that the statement from Moody’s CEO this morning undercut their messaging to Wall Street, and the utter lack of panic among investors has killed the Obama administration strategy to force the GOP to knuckle under to Harry Reid and Obama.

Yup, the scale-back is the battle Republicans can win, and it goes to the heart of the budget problem, not just the debt ceiling symptom.

So the answer is to fashion a new debt ceiling based on shutdown rates of expenditure – do not restore the part of government that is currently vacationing with pay. Set a time limit on the new ceiling before which it cannot be raised – something like establishing a budget – and while at it set the number without Obamacare implemented. Think about the current EPA workforce of 6.6% – sounds about right.

Look, Obama abuses power by using it to the max.

The reality is that Republicans have been abusing their power by not using it.

Use it, or lose it at this point.

If any republicans waver on that promise, it just shows they were never really serious of a balance budget amendment, just talk about it but never achieving

A couple of good ones for your Government Shut Down entertainment:

The Ballad of Ted Cruz

The RNC called me the other day and I interrupted the gentleman’s spiel to deliver my own polite diatribe detailing the reasons why I changed my voter designation from Republican to Independent after the Gang of Eight Amnesty fiasco, along with the many other reasons I am just as disgusted with most of the Republicans:

Not stopping the lawlessness, looting and pillaging by the Obama Administration, their contempt for the Tea Party and the pro-Islamist stance of CPAC are just a few of the reasons.

I’m tired of the posturing, backroom deals, sound bites and back handed maneuvering, and the kabuki theatre used by both parties to deceive and defraud the hard-working people of the USA.

I should have said, “the fewer and fewer hard-working people of the USA.”

Seems like taxpayers are becoming the minority while jobs are decreasing.

Are the Republicans on the talking head shows making the point that they’ve sent “clean” spending bills for individual departments to the sent where do-nothing Reid has refused to vote on them?

Perhaps this is the model that might be followed when the real crunch occurs and I con’t mean the, “raise the debt ceiling,” thing. The long we delay formulating a solution the greater the chances for failure.

Irregardless, prioritization of expenses is in the cards and then just maybe we can begin traveling down a path to fiscal sanity.

If we don’t, we will surely run out of other people’s money…

The budget is the problem, the national debt is the symptom.

Agreed. And we have not had a budget” for going on 5 years now. That is the plan of this administration and its toadies in Congress. No budget needed, the money still comes in to the treasury and the IRS will collect what is withheld. In short, the fiat money is there and all the administration has to do is government by edict and spend money by edict. Who, specifically, will stop them?

Cloward-Piven strategy is working perfectly to collapse the economy and force single payer everything on the populace. Welcome to the autocracy, soon to be political oligarchy.

It boggles the mind that Obama has made such a tactical political blunder that the 17% of the “budget” which has been “scaled back” has nailed the general populace in such a way as to be unmistakably vicious in motivation. The media have been unable to avoid covering it. This may turn out to be great luck for conservatives – I can’t say Republicans – as it has unmasked the president for all to see as nothing else has.

Which republican a-holes decided to give furloughed workers full back pay? Why? They hardly work as it is….ever try calling a government office just to hear the phone ring and ring, or hear a constant busy signal?

Anyone have a list of closed government golf courses? Huh? What? None, you say? Amber Alert closed? Golf course open?

Why isn’t The Fighting GOP messaging the crap out of this?

I keep hoping that Rahm will be caught in some ghetto crossfire in South Chicago. Boy, wouldn’t that be poetic justice.

My thought is that the GOP should maneuver to squeeze out the federal domestic discretionary programs with their CR and debt ceiling brinksmanship. The lifeblood of the D’s is those vote-buying, crony-capitalist domestic programs that in an originalist, pre-New Deal time were clearly unconstitutional. The Budget Control Act of 2011 passed into law a squeezing effect on domestic programs, unfortunately for the GOP, half on defense and half on domestic discretionary programs. Its clear advantage is that it’s Public Law today. I assume Dem’s hate it for that reason. The GOP should use that for maximum leverage in negotiations. Our Achilles heel is defense spending; we love it too much. Too much is just pork for the home district, often when the military needs something very different from what that pork vote “buys.” The military still has lots of bloat in it that does not contribute much to real defense capabilities.

My contrary thought: Middle class entitlement programs for which workers pay (FICA) payroll taxes of 12.4% for Social Security and 2.9% for Medicare should be higher priority than all federal domestic programs for which the recipients pay nothing directly. The “responsible” GOP wonky types always say, “We must reform entitlements to get the budget under control” meaning SS and Medicare. I say horsepucky. Given a Dem in the White House, Dem control of the Senate, I say use SS and Medicare as clubs to beat the life out of the Dem’s and their obsession with for unearned discretionary domestic spending boondoggles. Workers were forced to pay that 15.3% of their pay into SS and Medicare (they pay both the employee and the employer parts, of course). Respect that. Prioritize reducing the non-funded portions first – at least for the current situation.