Dems in House vote down funding for Veterans, Dist. of Columbia, Holocaust Memorial and Smithsonian

Dems in House vote down funding for Veterans, Dist. of Columbia, Holocaust Memorial and Smithsonian 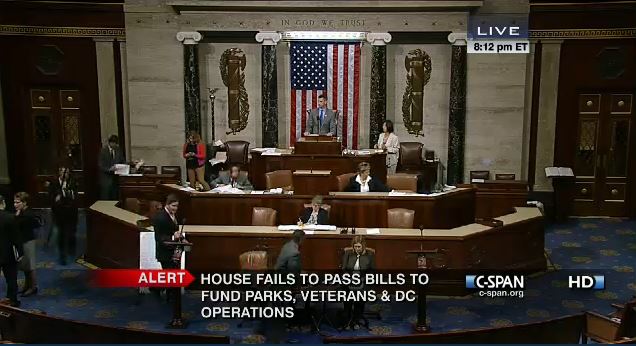 Under the Rules of Suspension they were operating under (not sure why, but it’s what it was), a 2/3 vote was needed in the House to pass legislation funding various agencies. [If someone has a procedural explanation, please post in comments.]

Democrats in the House voted against funding the Veterans Administration, the District of Columbia and National Parks, including the Holocaust Memorial Museum and Smithsonian.

House Democrats just voted to block our bill to honor our promise to America's heroes and provide immediate funding for veterans benefits.

Democrats on a rampage. Voted to deny DC their own tax revenues, even with DC's Democrat delegate pleading for passage.

Petulance.
And they will roll and scream and kick their feet.
We must be winning.

Absolutely we are winning.

They are losing and they know it.

Be sure to point out to everyone how ridiculous their tantrums are becoming!

Hardly unexpected. When was the last time Democrats actually showed any true respect for our veterans?

Those poor Vets first had to fight the Fascists in WWII.

Now they have to fight those American Fascists in DC, known as Democrats…….?

My understanding is that suspension of the rules in the House is a way for the House to take up a matter on the floor immediately. The motion is something like, “motion to suspend the rules and pass X”. Debate is very limited. There is a single vote which applies to both the suspension and X. It requires a 2/3 affirmative vote to pass. If the vote fails, X may still be taken up according to normal House rules (which takes time).

Also provides a way for “moderate” Dems (pretend to be moderate at home and then vote for everything SanFranNan orders) to vote ‘for’ these things, knowing that the bill, needing a 2/3 majority, won’t pass. This provides a little cover back home.

Kinda’ surprised it took this long for the R word to crank up..

So the stock market had a nice recovery after a 5 day skid today. Perhaps the liberal media fear mongering for the shutdown was more damaging than the event itself?

My trash was picked up on time, my mail was delivered, my water is running, and my electricity is on. Also, I still got paid at my job from a state-funded institution of higher learning (with a Republican former senator as President I might add).

So far, the self-described “non-essential” shutdown has been a party.

Why is it that jackasses always elect spoiled, vindictive children to represent them.

The District of Columbia isn’t getting funded? I can only pray this causes the lights to go out in DC. Maybe garbage will not get picked up, though any increase in the DC stench would barely be noticeable.

Not to mention that the House has passed four of the normal Appropriations bills which the Senate has refused to vote on.

Also, note that most of the Senate’s versions have left committee, but the Majority Leader hasn’t brought up squat.