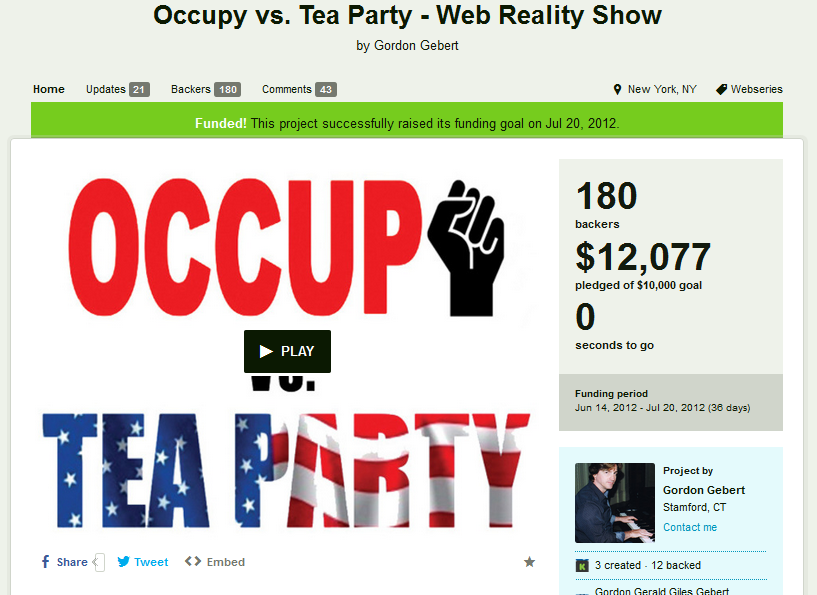 As a big fan of capitalism, I am fascinated by the concept of crowdfunding, whereby individuals network and pool their money via websites to support potentially profitable enterprises initiated by savvy entrepreneurs.

Perhaps the best known crowdfunding enterprise is Kickstarter, which offers a chance for citizens to directly fund projects or business of interest to them.  In fact, there are a few Tea Party projects that have been funded via the website that may be of interest to Legal Insurrection fans.

One listing is Black Tea, a feature-length documentary film that tells the stories of Black Americans affiliated with The Tea Party movement.

Then there is Occupy vs. Tea Party – Web Reality Show, and the project creators say that Chuck Woolery wants to host the program and Ted Nugent has expressed interest in the show. The concept is to pit Occupy vs Tea Party participants against eachother in challenges, eliminating team members “Survivor” style. It should make for fascinating viewing.

However, Tyler Durden of Zero Hedge reports on an even more innovative application of this concept: The use of crowdfunding to rescue bankrupt cities.

Central Falls, the Rhode Island city that filed for bankruptcy two years ago, is seeking to finance a park project through a crowdfunding website rather than the municipal-bond market.

The city of about 19,000 wants $10,044 to put five trash cans in Jenks Park, which is currently “littered with garbage and debris,” according to the campaign on the website Citizinvestor, a site where residents can fund municipal projects. The initiative so far has $295 through 11 donations.

The decision to circumvent capital markets may foreshadow similar steps by other cities when they exit court protection, such as San Bernardino and Stockton in California and Detroit, which filed a record municipal bankruptcy in July….

I’m rarely speechless, but I’m having trouble putting my emotions into words after reading the latest report on the Detroit pension situation. Now, I admit it: I’m kind of naïve. Usually when I see an underfunded pension, I think to myself “poor pensioners — undone by a combination of stupid tax rules, volatile stock markets and mismanagement by trustees who tried to restore depleted fund assets with an investment approach you might call ‘desperate optimism’.” Thus, I was not entirely prepared for the new revelations about the Detroit trustees’ custom of handing out annual holiday “bonuses” to workers, retirees and the City of Detroit. Between 1985 and 2008, they handed out roughly $1 billion this way. Had they been invested, one estimate says those funds would be worth almost $2 billion today — or more than half the current shortfall in the funds.

However, as our Congress seems currently unable to pass a budget of any sort (#BlameHarryReid), I wonder if this approach can be scaled up slightly….and soon!

Here’s an idea:  Shut down the entire government (including the White House and Congress), and let us crowdfund our favorites.  I have a big check I would like to send to some Green Berets and Navy Seals!  Others can donate to Michelle Obama’s vacations, if they choose.  I can’t imagine why the Democrats wouldn’t go for this “pro-choice” approach.

I would like to donate to a special edition of Mad Magazine featuring Elizabeth Warren.

On a serious note, I read about Crowdfunding in a recent Chicago Tribune Magazine story. The Crowdfunding was used to help those families overwhelmed with medical bills because their children have special medical needs. Great Idea!

$10K for five trashcans? Are they saying that local volunteers and businesses can’t kick in a couple hundred bucks and a few hours to do that?

The $10K trash can acquisition, and I am assuming frequent emptying as part of that cost, is not venture capitalism; there is no monetary return on that “investment,” just [hopefully] a tidier park, but probably not.

BTW, The Communists just called and they want to know how to sign up for this new form of Capitalism! 😉

Crowdfunding is not “small-scale venture capitalism!” Crowdfunding “investors” do not actually invest in anything. Legally they cannot. Instead they give/donate money to a project or they purchase a product or service in advance, usually at a discounted price.

The so-called JOBS Act was supposed to allow startups and growing companies to promote investment opportunities to the public and online for the first time, but SEC regulations have hampered even that goal. Since the Great Depression, the federal government and most states have put severe restrictions on how businesses can legally raise private capital. Advertising on the internet and taken small amounts of money from unqualified investors (those who make less than $200,000 and have less than $1million) for shares in a company is illegal. Therefore, Kickstarter and its like don’t allow entrepreneurs to offer shares in the company.

The crowdfunded entrepreneurs often don’t realize that they actually have to pay sales tax on the sales they have made on Kickstarter and other like sites. It can be a trap for the entrepreneur. These sites can be great ways to raise money quickly, but the people trying it must be aware of what it really is.

True small-scale venture capitalism could create bookkeeping nightmares for a new or growing business, but it should be permitted nevertheless. Right now we see unqualified investors essentially donating money to projects. An investment–no matter how risky–can’t be worse for them than a donation.

The author here, Ms. Eastman, is a California Democrat. You really can’t expect her to understand what Capitalism is. LOL. I still have no idea why the good professor has her as a contributor here at LI.

Yea, $10,044 for 5 trash cans ? I think that finances are not their strong point. I think we can also see how they ended up bankrupt.