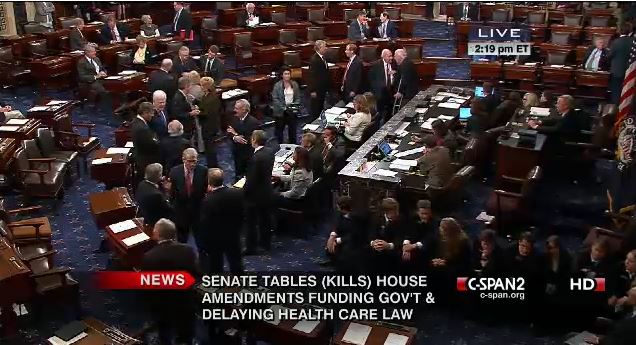 The Senate voted to “table” the House Continuing Resolutions passed Saturday night to fund the government with a delay in Obamacare.

It was a party-line vote. 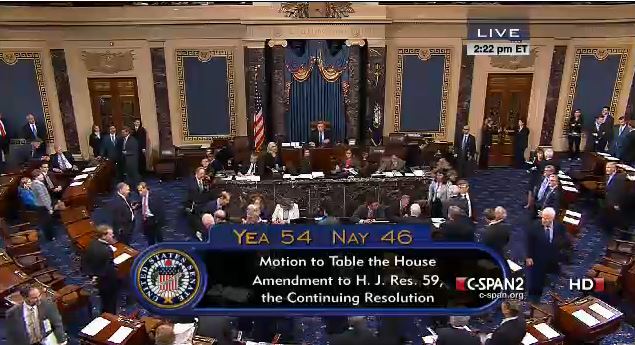 What would Reid or Obama have to do to get tough coverage in this fight? Actually shoot an actual hostage?

Remember to tweet the hastag #BlameHarryReid, which continues to rise (a/o 2:35):

NEWS FLASH! REID DID WHAT HE SAID HE AND THE DEMS WOULD DO.

NEWS FLASH! BOEHNER IS DOING WHAT THE REPUBLICANS HAD SAID HE/THEY WOULD DO, VACILLATE AND BEG.

“Some Republicans want the House to pass a new bill that would fund the government but also would require President Obama, Vice President Joseph R. Biden and all of the administration’s top political appointees to forgo their government health plans and join the health exchanges.”

Like yea, that would really make a dent in any of this crap. Shamefully impotent.

“Still to be decided is another measure the House passed unanimously early Sunday morning that would guarantee U.S. troops continue to be paid even in the event of a government shutdown.”

Maybe Harry will give Boehner his balls back, instead of keeping them in the Senate janitor supply room?

Thank God. Every second this corrupt government is shutdown, is one second we’re not getting screwed over.

Best option I see is:

Gather up these Lefty Dumbs Hairy first and send these foul beings to Somalia, Kenya, Syria. Here that they are nice this time of year.

Vladimir wouldn’t even want the bastards..

Senate Majority Leader Harry Reid has been the most ardent proponent of President Barack Obama taking a hard line with House Republicans in the latest fiscal crisis engulfing Washington.

When the president considered sitting down with the four congressional leaders in the White House ahead of the deadline to avert a government shutdown, Reid privately urged Obama to call off the meeting, according to several people familiar with the situation. Reid believed that it would amount to nothing more than a photo-op that would give the false impression that a serious negotiation was occurring, even warning he wouldn’t attend such a session. Obama scrapped it.
—Politico

That’s some leadership you Collectivists have.

Dictators. And you LOVES you some dictators.

Was this the same Senate Majority Leader Harry Reid who was endorsed by the NRA in 2010 over the Tea Party candidate Sharon Angle?

They graded Angle an A and Reid a B, but endorsed neither of them.

Only about 3% of America’s population have ever heard Beethoven’s 9th Symphony. Classical musical illiteracy prevails.

This is true, too, on insurance topics. Drivers carry it because the police, when you’re stopped, can ask to see proof that you’re covered. And, if not, you’re fined.

ObamaCare is supposed to fund those who remain without coverage. But who also have income. States pay for those on Welfare. Those who don’t even own their cars. And, have no assets to speak of.

Was insurance a hodge podge? It still is. It’s a STATE activity. Which is why there are 50 different departments of Insurance. One for each State. And, even here … you have about half the states (26, I think), cooperating with the new Affordable care Act laws. The others are not.

Perhaps? Most reminiscent of Brown V. The Board of Education. Which forbid States in the south from depriving black kids seats in white schools.

I think it was in the 1950’s. In Arkansas. Where someone named Orville Farbus (?) was governor. Eisenhower was president. And, Norman Rockwell painted the scene of the pigtailed little girl being walked to school by a police marshal.

Slowly, things changed. (And, then busing came to Boston, and all hell broke loose.)

It’s no longer something we debate.

Was physician confidentiality upheld, after insurance took over? Now, of course, we have social media. And, computers everywhere. So an interconnected network isn’t something you can stop. Anymore than you can stop Google from sending cars with mounted cameras down your streets. Where, now, anywhere in the world, you can look up an address.

Has the GOP decided to commit suicide?

One, in the 1950’s, they thought they MUST find communists. Under the beds of Hollywood’s stars. Didn’t make a dent in the political system. But it was grandstanding at its finest. And, it’s worst.

“IF people were happy with their insurance.” Well, that part’s been the pits for ages. Costs for this went through the roof. And, in many cases, IF you had a good job, you got your health insurance where you worked.

My bet is that the GOP keeps its base. But it doesn’t grow itself into a respected national force. Part of the problem? Most of the cooties that serve in Congress, can’t get more than a 12% favorability rating.

Compare this to a college professor; who gets rated by students as the worst in the business. Gets to tenure? (Maybe, at Harvard. They’re NOTORIOUS for firing the professors who are really, really liked by their students.) But most of the time poor performance leads to “pink slips.”

The Affordable Care Act? Gets to live or die in the marketplace. If it dies? ALL politicians remain hated.

Most reminiscent of Brown V. The Board of Education. Which forbid States in the south from depriving black kids seats in white schools.

Good grief. I don’t even know where to start.

In the media bias department, during lunch just now I saw CNN airing the results of a poll about the shutdown. For the “who is to blame” question, the only choices were “Republicans in Congress”, “President Obama” or “Not sure”. The only explanation I can think of for how a legitimate news organization can exclude Congressional Democrats as possible answer to that question would be that CNN already views the Congressional Democrats as tools of Obama.

In the immortal words of Hillary Clinton:

“What difference does it make?”

Boehner: Not unless you agree to defund Ocare.

Boehner: Not unless you agree to delay implementing Ocare for a year.

Boehner: Not unless you agree to have congress, the VP, and the Prez lose their premium healthcare benefits and join Ocare.

Boehner: By agreeing to do what Harry told me to do, which was my idea all along, I have saved the nation by increasing awareness about this Ocare thing that no one wants anyway. I love it when one of my plans comes together. Now lets get back to governing this great country.

[…] hypocrites in Hollywood, women’s magazines pulling hard for ObamaCare. Big Media understands that united teams win. That’s something Republicans should think about as they walk towards the O.K. […]

#SequesterTheater, starring schoolkids locked out of the White House, flopped at the box office. Now they’re going to roll out #ShutdownTheater, in which they turn off a PandaCam.

I don’t think I can stand it.

Normally I could care less if the federal government shut down. Currently, however, I need a document from the FAA in order to complete a project I’ve been working on for decades. It looks like I’m about to be screwed, temporarily, anyway.

Shoot a hostage? You realize that the media and the Democrats (sorry for the repetition) want some deaths from a government shutdown. It wouldn’t surprise me if some of the apparatchiks plan on ensuring a few deaths that Pravda can blame on the GOP.

There is no compromise with these people. They are pure evil.

The WINNAH for the Inigo Montoya Prize of teh day…!!!

So far, more people in NE Florida blame the Democrats than the Republicans:
http://www.actionnewsjax.com/content/washingtonbureau/story/How-government-shutdown-would-affect-you/wolRpKqj5EqTEvK4Lmsmbg.cspx
Go ahead and vote while you’re there 😉